If you’ve been researching the best fruit trees, chances are you’ve heard about Kieffer pear trees.

This European-Chinese hybrid pear is one of the best tasting species there is, and it’s easy to grow and care for. But, are they the right size for growing in your yard or garden?

Read on below and explore everything you need to know about growing this tasty variety of pear trees!

The Kieffer pear tree is a cross between sand pear trees and Barlett pear trees. It originated back in the 1860s. The tree draws its appearance from its parents.

In the spring, Kieffer pear trees have green leaves that turn darker and glossier as the seasons progress into summer and early fall.

During the spring, small white blossoms appear on the trees by the thousands, effectively turning the trees snow white for several weeks.

By full autumn, the tree takes on the appearance of a giant burning bush with bright red and orange leaves.

Of all pear trees, you couldn’t choose a better species for ornamental purposes than the Kieffer.

The dwarf Kieffer pear trees are roughly half the size of their full-size counterparts. These trees top out at heights of just 10 to 15 feet, their canopies reaching widths of approximately 8 to 10 feet.

Like many of the best fruit trees, the Kieffer pear tree has an average growth rate of up to 2 feet per year.

That said, when planted in the shade, your Kieffer may only grow between 4 to 12 inches in a year.

Kieffer’s are generally milder tasting than other pears but just as juicy (if not more so than others).

The fully ripe yellow Kieffer pears are known for having a slightly musky smell and sweet taste to them as well.

How Much Sun Does a Kieffer Pear Tree Need?

The best location for a Kieffer pear tree is somewhere in your yard or garden that receives a minimum of 6 to 8 hours of direct sunlight.

That said, finding it a spot that gets a bit more sun wouldn’t hurt either! The more sun, the quicker it will grow.

When Do Kieffer Pear Trees Bloom?

Kieffer trees start blooming their pretty little white flowers in the springtime, usually during April or early May. The full blooming of flowers last for a couple of weeks.

However, the Kieffer pear tree doesn’t actually produce its mature pears until the autumnal months of September and October (sometimes even later). 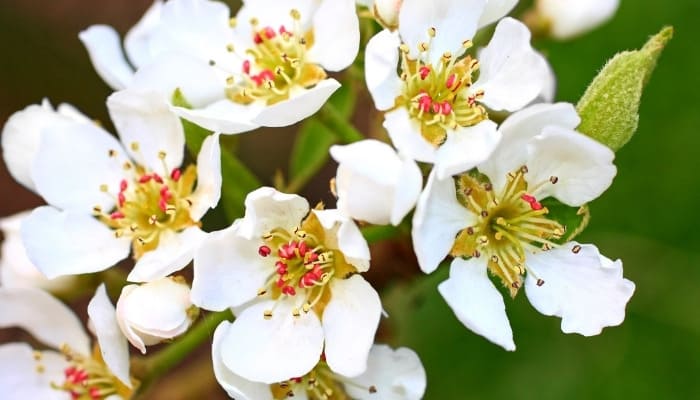 Does a Kieffer Pear Tree Need a Pollinator?

Kieffer pear trees need to be pollinated, whether by themselves or by another nearby pear tree. The type of pear tree can be the same, but it can also be a different species of pear as well.

How Long Does It Take for a Kieffer Pear Tree To Bear Fruit?

From the time of first being planted, the average pear tree takes between 3 and 10 years to start bearing fruit.

Once pear trees begin bearing fruit each year, it takes roughly 90 to 160 days following flowering until pears are ready for harvesting.

When Do Kieffer Pears Ripen?

Most Kieffer pear trees’ fruit is ready for harvest between September and October.

That said, some trees may produce late harvests well into the colder months of November and December (or even January on rare occasions).

The Kieffer pear tree needs pruning once per year, preferably in the wintertime while the tree is in a dormant mode.

Depending on how tall and wide you wish for the tree to be, start by clipping lead branches on the top and sides. Let the lead branches guide you in shaping them to the desired height and width.

Generally speaking, Kieffer pear trees are considered deer resistant because they are less tempting to deer than other pear species.

That said, when deer are starving, they have no issue eating Kieffer pears (and anything else right down to your ornamental grass and flowers).

All fruit trees are prone to attracting a host of various pests. A few of the most common Kieffer pear tree pests are aphids, mites, codling moths, pear psylla, stink bugs, beetles, and more.

Don’t let pests scare you away from planting pears though. There are plenty of easy pest remedies you can use to protect your trees.

The Kieffer pear tree is affected by the same basic diseases the majority of pear species are: pear scab, sooty blotch, blight, and leaf spot.

The better maintained your trees are and the more attention you pay to how they’re doing, the less likely they are to suffer.

Depending on what you’re doing with them, pear trees generally need around 15 to 20 feet between them.

If you want them to be a bit smaller and plan to prune them heavily, 10 to 12 feet is ample space.

Dwarf Kieffer pears only require between 8 to 12 feet of space between trees.

Planting Kieffer pear trees isn’t much different than planting any other fruit tree.

Just keep in mind everything you’ve learned about them along the way (like how much light they need), and you’ll do just fine!

The five steps to planting a Kieffer pear tree successfully are:

A Kieffer pear tree needs a location that gets at least 6 hours of direct sunlight per day if not more. It also requires a location with rich but well-draining soil as well.

Have a good look around your property, and consider the tree’s necessities before picking the best possible location available.

There isn’t much left to do once you’ve chosen the best planting location aside from the actual work!

Pick up your shovel and start digging your hole. Make sure it’s not much deeper than the rootball of the tree.

Remove the grass and weeds from the backfill as you go, that way it’s less work filling the hole back in once you get the tree in place.

When your hole is ready, firmly plant the rootball in the center of the hole and gently spread its roots out as much as possible. Stretch them in all directions if you can.

Try to add around 25 to 35% of organic compost to the backfill, and mix well to get your young tree off to a great start.

Fill the hole back in, slowly at first, gently packing soil over the exposed roots.

Along with the organic compost you mixed into the dirt that went back into the ground with your pear tree, follow up with a healthy dose of fertilizer and water.

You can even mix the fertilizer into the water if you want!

Apply more water to the tree every day for the first 14 to 21 days after planting, and then reduce watering to once every few days/as needed. Just don’t let the tree’s roots dry out on you!

5. Add Mulch to the Tree’s Base (Final Touches)

The final touches include adding more compost to the base of the tree, followed by woodchips or mulch of some sort.

You could also plant flowers, grass, or herbs around the tree’s base as well if it’s being planted for ornamental purposes.

The Kieffer pear tree is a great choice for yards and gardens, whether grown for looks or for harvesting their sweet but mild and juicy fruit.

For ornamental purposes, there are few better fruit trees for home gardeners.