Growing plants hydroponically isn’t nearly as complicated as it may seem at first glance.

There are, however, several common issues to look out for (as there are with ALL forms of gardening).

Hydroponic root rot is one of the leading reasons for sick and dying plants in hydroponics.

What does root rot look like in hydroponics? Root rot is easy to identify: the affected plants start showing limp or wrinkly leaves that turn yellow and then brown. The roots go from clean white to dingy yellow and finally a grungy brown color caked with gunk. The smell of decomposing plant matter and soggy roots accompanies these signs.

Read on below to learn all about hydroponic root rot and how to deal with this common issue.

What Is Root Rot and What Causes It?

Root rot is caused by fungus, mold, or bacteria that grows when growing mediums are too damp for too long due to overwatering or poor drainage.

It begins growing on root systems of plants when they become overly exposed to moisture, resulting in loss of oxygen and the beginning of decay.

Fusarium fungi, and other types, such as Phytophthora, Pythium, or Rhizoctonia, are commonly the main offenders causing root rot in hydroponic systems.

It is also important to note that the condition is transferable. That means it can be accidentally moved from one container or area of the garden to another.

Keeping the growing mediums of your plants sterile, well drained, and aerated are key factors in preventing root rot.

Is It Root Rot or Something Else?

Root rot is typically quite simple to identify: a blackened area on your plant, most often found on stems and branches.

Above these black spots, which often appear in the form of dark rings, are wilted leaves or, worse, yellow, brown, or dead crispy leaves.

Removing the plant from its growing medium and checking the roots helps identify the true culprit.

When looking at the actual roots of a plant, root rot is visible as yellowish, brownish, or black roots.

The roots are typically slimy, smelly, and bound together in a mess. Healthy roots, on the other hand, appear white.

There are a few main causes for root rot in hydroponic plants:

When hydroponic plants aren’t able to take up enough water, nutrients, and oxygen through their root systems, they are at risk of root rot.

Keeping a close eye on the water and air temperatures, water flow, and pH levels goes a long way in protecting your plants from root rot.

Can Root Rot Happen In Any Hydroponic System?

Technically, root rot can occur in just about any type of growing system, including hydroponics.

That said, some hydroponic systems are more liable to develop root rot issues than others.

The hydroponic systems most susceptible to root rot are:

Any hydroponic system that keeps roots submerged in water for long periods of time is prone to developing root rot.

Likewise, malfunctioning systems or improperly maintained systems that need to be cleaned or repaired are also highly likely to have issues with root rot.

Root rot often has a distinctive and potent smell, something like a swamp scattered with rotten eggs, fruits, and vegetables.

However, that is not always the case. The smell of root rot can be a bit tricky to detect in the beginning stages.

Sometimes roots take on the smell of the plants that are growing in your hydroponic system.

So, when root rot first begins showing up, its scent may be simply a slightly more potent odor than usual.

Once root rot progresses far enough that your plants are outright beginning to die, you can’t mistake the rotten smell.

Imagine a trash can full of vegetables and water left outside in the sun to bake.

How To Prevent Hydroponic Root Rot 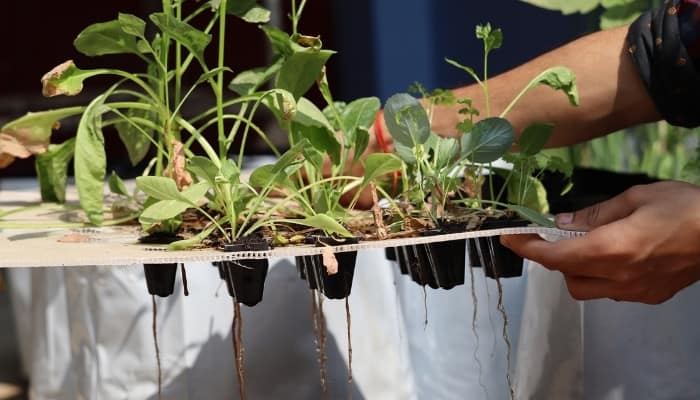 There are numerous ways to prevent hydroponic root rot. The easiest way to do so is to simply use the best hydroponic gardening practices.

A few of the most common sense ways to prevent hydroponic root rot are:

Additionally, keep in mind that there are endless amounts of tips and tricks for preventing root rot in hydroponics.

All it takes is a bit of research on your part to find out which methods work best for you.

Lastly, remember that simply keeping a clean and well-maintained hydroponic system, in general, is the most successful way to avoid root rot issues, period.

Can A Plant Recover From Root Rot?

Hydroponic plants can absolutely recover from root rot if the infected plants are identified and treated in time.

When root rot is first beginning, one of the first indicators is saggy or wilting leaves. This first clue may be accompanied by a stronger-than-usual smell.

If you’ve ever grown tomatoes or basil, for example, you’re familiar with their unmistakable scent.

If you tend your plants daily, you have a pretty good idea of how strong they smell.

That said, if a plant looks fine one day but the next day it’s saggy compared to others and it smells stronger than the rest, it may be succumbing to the beginning stages of root rot.

At this point, it is very possible that the plant is well worth saving.

If the plant has more yellow, brown, and dead leaves than it does green leaves, it is more than likely beyond saving.

In addition, some plants aren’t really worth “saving” because the damage ruins their value.

Leafy greens such as lettuce and spinach are great examples of plants that aren’t really worth fussing with once they’ve been seriously damaged by root rot.

On the other hand, plants like basil, peppers, and tomatoes, are almost always worth the effort to try and save.

That’s because the root rot doesn’t affect the edible parts of the plant (such as the peppers or tomatoes themselves) or they are so quick growing (as in the case of basil) that new growth may pick back up within days.

Hydrogen peroxide is well known in the hydroponics world for killing root rot. It is a quick and efficient treatment method and an affordable one at that.

Start by carefully removing the damaged and rotting parts of your plant(s), minus the roots. Do so with twig clippers, shears, or another small and sharp instrument.

Next, move on to emptying the water in your hydroponic system. While the reservoir is empty, take the time to scrub it down extra well and rinse it out several times.

Refill the reservoir with fresh water at the correct temperature for your hydroponic system. Add in 3 milliliters of hydrogen peroxide for every gallon of water.

After 24 hours passes, repeat the entire process one or two more times.

On the second or third phase of doing so, empty the tank one last time and fill it back up with fresh clean water.

Now you’re ready for resuming normal operations, and hopefully, the root rot won’t be a part of it anymore.

Over the years growers have come up with creative ways to treat root rot. A few of the best methods are:

The best way to treat root rot is a combination of the methods listed above.

Hydroponic root rot is, unfortunately, not at all uncommon.

Too much light, too little light, the wrong amount or temperature of the water, and various other factors cause root rot in very little time.

Hopefully this article helps you identify and revive your plants that are affected with root rot or, even better, prevent it altogether!