Hydroponics, the art of growing plants without soil, is as fascinating as it is fruitful for gardeners and farmers of all skill levels.

That said, out of the various methods of hydroponic growing that exist, a few of them are a bit more successful, and complex, than others.

Aeroponics is one such sort of hydroponics. But first, before deciding whether or not aeroponics gardening is right for you, you need to know exactly what aeroponics is and how it works.

Aeroponics is one of the most advanced forms of hydroponics. In an aeroponic system plants are grown using air, water, and liquid nutrients. Aeroponics produces faster-growing plants than other hydroponic systems. Produce grown in these systems is often healthier, more colorful, and tastier.

Think aeroponics might be the right type of hydroponic gardening for you? Have a look at the following sections before jumping to any conclusions.

How Does Aeroponics Work? 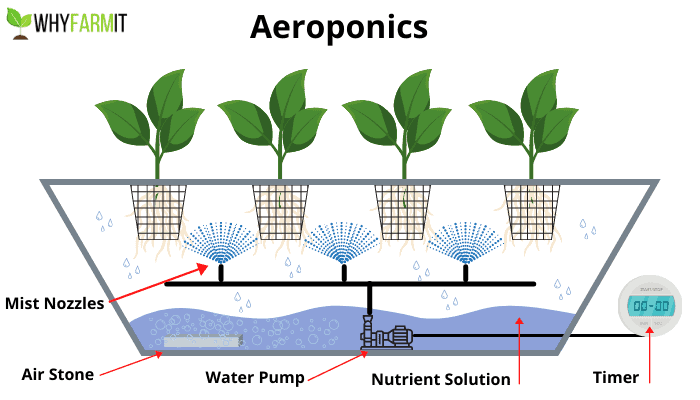 Aeroponics is a specialized way to use hydroponics for the growing of plants in an air-based environment where they receive regular misting with water and liquid nutrients on their stems and roots.

That said, aeroponics is slightly more complex than other forms of hydroponics.

However, it is also a sure way to grow crops faster, larger, and receive higher yields than with other growing systems.

The benefits of aeroponics are relatively straightforward:

Plants grow faster, less water is required than other forms of hydroponics, larger crops with better yields are produced, and a perpetual growing season that lasts all year is possible.

Aeroponics also has a few significant disadvantages that you should be aware of:

The cost is higher, more experience is needed to get started, more constant supervision is required, power outages cause major issues, and they can generate quite a bit of noise.

There are three main types of aeroponics:

Depending on the amount of experience you have, and the size of the learning curve you are willing to take on, low-pressure systems are recommended for beginners.

There are several nutrients necessary for successfully growing crops in an aeroponic system, including primary, secondary, and micro.

Micro-nutrients for aeroponics consist of:

What Is Aeroponics Commonly Used For?

Aeroponics is most commonly used for growing plants indoors, in small spaces, and for larger commercial hydroponic gardens.

It is also a successful system for maximizing sizes of harvests as well as cloning.

Aeroponic growing systems are also used by universities and major institutions (such as NASA) for in-depth studies and other educational purposes.

Technically speaking, aeroponics is a sub-type of hydroponics. However, it is such an advanced form of hydroponics that it is often considered as a separate growing method altogether.

Aeroponics is a special type of hydroponics that involves anchoring roots into seal containers, on top of a reservoir, where their roots are then repeatedly misted with water and nutrients as well as being exposed to controlled amounts of air.

When most people hear the term hydroponics, including experienced gardeners, they tend to think about/relate it to the basic forms of hydroponics, such as deep water culture and ebb and flow.

Hence, aeroponics is often confused for not being hydroponic.

Is Aeroponics Cheaper Than Hydroponics?

The cost of hydroponics ranges from a few dollars and the use of improvised parts, like fish tanks and rubber tubing you may already have at home, to hundreds and even thousands of dollars.

Depending on the sort of hydroponic system you’re purchasing, or building and how advanced it is the more it costs to put together and keep operating.

Aeroponics, even on a small scale, is one of the most expensive forms of hydroponics to build and operate.

Brand new systems often cost well into the thousands of dollars. Even smaller used systems may cost you a few grand.

Aquaponics is a method of growing plants that combine hydroponic systems with aquaculture (growing/raising aquatic animals such as fish or snails in a reservoir).

There are several significant differences between the two:

What Plants Can Be Grown With Aeroponics?

A wide variety of things can be grown with aeroponic systems including fruits, vegetables, greens (including micro-greens, lettuce, spinach, swiss chard, and more), baby trees (also known as whips), and just about any sort of crop that has roots.

How Much Water Does Aeroponics Use?

One of the most impressive aspects of aeroponics is the tiny amount of water required in comparison to other growing methods, including hydroponics, traditional gardening with soil, and other advanced systems such as aquaponics.

In fact, most aeroponic systems use up to 98% less water than other growing methods according to NASA.

Small systems may require as little as a few gallons of water in the reservoir while larger setups can hold 50 gallons, 100 gallons, or even more.

Can Aeroponics Be Organic?

Under the USDA organic regulations, hydroponic growers, including aeroponic growers can indeed qualify for organic certification.

Using organic nutrients/fertilizers in an aeroponic system, however, tends to require a few minor changes (or far more cleaning) for the system to continue functioning optimally.

This is due to the fact that organic fertilizer, even the liquid sort, often consists of numerous particles which in turn end up clogging up tubing and misters.

An in-line filter, for example, for the most part, allows aeroponic systems to run with organic nutrients without becoming regularly clogged or requiring extra cleaning.

Regardless of how much more aeroponics may cost than other growing methods, it is still very cost-effective.

Thanks to how fast crops grow, as well as how large the yields are, compared to almost any other growing system, aeroponics can be considered well worth the cost.

Do Plants Grow Faster in Aeroponics?

With aeroponics, most plants grow twice as fast. Further, again according to NASA, some plants grow three times faster in aeroponic systems rather than in soil.

That said, outdoor aeroponics does indeed require sunlight and have a much more limited growing season than indoor setups. 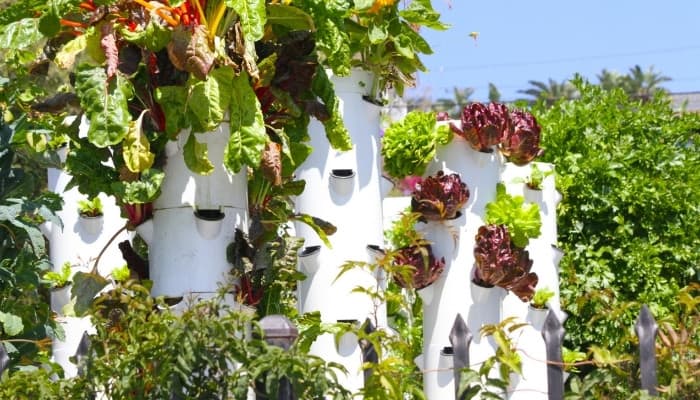 Aeroponics is sometimes utilized with tower systems, which are often referred to as vertical aeroponics.

Vertical aeroponics function in the same manner as a typical aeroponic setup, except for one exception: they grow straight up, and the plants/containers are mounted sideways rather than straight across the top of the reservoir.

The more exposure that aeroponics receives each year, the market becomes more and more saturated with pre-made systems.

That’s why picking the best aeroponic system for home gardeners requires proper research, including reading a few reviews (like the ones below)!

Here are our top three picks for the best aeroponic systems for home:

The Aerospring Vertical Aeroponic System is an easy-to-use aeroponics grow tower with room for 27 plants.

The unit holds 20 gallons of water and measures 34 inches wide, 74 inches tall, and comes with a 20-foot power cord.

The system is portable, with wheels built into the base as well as a 200mm quiet exhaust.

The manufacturer of this unit has a focus on functionality for home use and designed it for beginners, intermediates, and experts. Further, the company offers customer service that’s available 24/7.

Another excellent system to consider, whether you’re a first-timer, or a hydroponics pro, is the lightweight and stackable Aeroponic Vertical System by Nutrabinns, a high-quality setup that combines aeroponics and NFT hydroponic methods.

The award-winning unit is energy and water efficient, using (on average) 66% less power and 95% water.

The system supports 80 pots, is programmable, and allows you complete control over water supply, power, nutrients, and humidity.

Speaking of humidity, water vapors are captured and recycled to be reused to deliver nutrients to plant roots.

Even more, the design is made to maximize crop yields and speed up the growing process. Lab-tested, the unit produces 40% more food at speeds three times faster than other systems.

Last but not least, the Tower Garden FLEX Growing System is our last suggestion for a great vertical aeroponics system that’s friendly for home gardeners of all skill levels.

The system is made from high-end UV-stabilized food-grade USDA-approved plastic with slots for growing 20 plants.

Aeroponics may not be the first hydroponics method that the experts suggest giving a try, but in reality, you don’t have to be an expert to successfully grow crops with an aeroponics system.

Hopefully, our article helps you make the decision whether aeroponics gardening is right for you or not.