Hydroponics is a fun and interesting soil-less way to practice gardening or farming.

However, there are several aspects that you must be aware of for healthy plant growth. One such factor is hydroponic root management.

Read on below and learn everything you need to know about root management for healthy plant growth in hydroponic growing systems!

If treated properly, hydroponic roots grow and thrive in a way that is far faster and much more vigorous than their soil-dwelling counterparts.

In this section, we discuss six of the most important factors required for having healthy hydroponic root systems.

Generally speaking, the best pH level for hydroponic root systems is 5.5 to 6.5.

That said, it is wise to research the most preferred pH level of the specific plants you are growing (or plan to grow) before making those adjustments to your hydroponic systems water supply.

Hydroponic roots thrive in the darkness. It’s okay for them to have a bit of light exposure, but direct light is a big no-no, as is continued exposure to even low light.

Another significant factor that has a major impact on the healthiness of your hydroponic plant roots is the level of aeration going on.

Roots need a steady supply of fresh oxygen. If anything disturbs that airflow, issues are sure to follow.

As with light and air, water is an obvious must for healthy root systems. That said, over-saturation of moisture is one of the biggest issues with root systems.

Too much water leads to mold, fungus, bacteria, and root rot.

Each plant has its own unique nutritional needs, which are just as crucial for the root system of the plant as it is for the plant and its fruits/vegetables.

Root inoculants are solutions that consist of organic materials including microbial agents. They are used to stimulate and promote optimal root growth in plants.

In hydroponic systems, they may work wonders, especially after trimming roots.

Just be sure to use a highly regarded product designed for hydroponic systems, like Botanicare Hydroguard Bacillus Root Inoculant.

Monitoring the Growth of Hydroponic Roots

Keeping a close eye on the growth of your plant’s root system is a major aspect of hydroponic root management. Without constantly monitoring them, there’s no good way to tell when they need trimming.

To do so, simply lift your pots out of their hydroponic grow sites and have a look as often as possible. There’s no real need to check daily, but having a closer look at them a couple of times per week is suggested.

Furthermore, if you are not checking up on the roots often, you won’t be able to prevent a few rotten roots from destroying entire root systems. 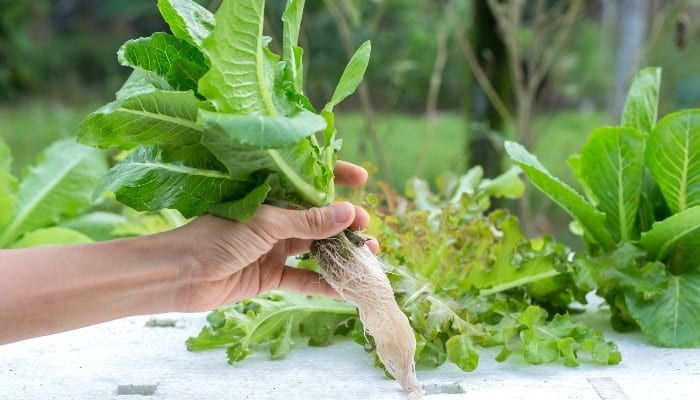 What Color Should Hydroponic Roots Be?

Generally speaking, the hydroponic roots of your plants should have a creamy off-white color with new shoots ranging from crisper and cleaner white to practically invisible.

If you’re using a deep water culture (DWC) system to grow your hydroponic plants, the roots may turn a golden or brownish color.

In other hydroponic systems, roots that aren’t white, off-white, or cream white should be trimmed immediately.

Root rot is one of the worst nightmares of hydroponic growers.

If gone unnoticed for even a short time, once it sets in, root rot can spread through every root system in your growing system and kill them all.

A few of the best practices for preventing root rot in hydroponics are:

How Long Should Hydroponic Roots Be?

There is no golden rule for hydroponic root lengths, as the types of hydroponic growing systems and plants that grow in them are extremely diverse.

That said, for basic DWC hydroponics, an average length of 10-inch roots is considered healthy.

In hydroponic systems with grow pipes, 4 inches to 6 inches is a good length for your plant roots.

Keeping your plant roots in good shape involves trimming them from time to time, which isn’t such a big deal when it comes right down to it.

It only takes a few minutes even if you have several plants to handle.

The major benefits of trimming roots in hydroponic systems are:

Roots may absolutely clog up the pipework of hydroponic systems if they aren’t maintained properly.

DWC and RWDC as well as ebb-and-flow type systems are among the most notorious for clogs and root jams.

When your plants develop such healthy and thriving root systems that they’ve become thick masses, they are in desperate need of trimming.

No worries, however, they’ll grow back in no time.

Can Hydroponic Roots Be Trimmed?

Hydroponic roots may absolutely be trimmed and oftentimes need to be in order for your hydroponic growing system to continue functioning properly.

If roots are left unchecked for too long, they can grow as much as three to four times longer than necessary.

Likewise, hydroponic roots that aren’t trimmed often enough can grow wide and thick enough to completely block passages inside the hydroponic system they are growing in.

To do so, simply use sterilized scissors, measure, and snip.

Some hydroponic growers recommend that you start trimming your hydroponic plant roots once they shoot just a few inches out of the bottom of the grow site/net pot they’re anchored in.

The theory is that it makes them grow back thicker, longer, and healthier as well as stimulates growth and vigorous development of the top side (the actual plant). 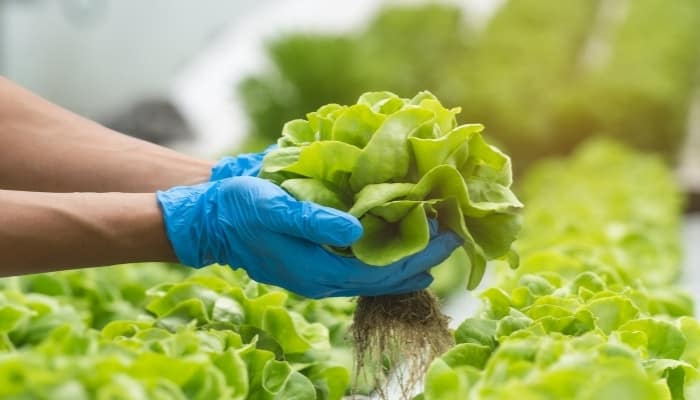 How Do You Know If Hydroponic Roots Are Too Long?

When roots stay too damp for too long, they begin to develop root rot or breed harmful bacteria and fungus that can harm or destroy the rest of the root system and plant.

The number one reason that this happens is the roots are too long.

When roots start changing color, feeling slimy to the touch, or are spreading and tangling into other nearby root systems, they are too long.

That means it’s time to trim them back to just a few inches long and as wide around as their containers.

When To Prune Hydroponic Roots

Hydroponic roots need trimming for a few reasons. The main times to prune them include:

Further, it’s also a good idea to set a special time to trim your roots. Think of it as taking them to the barbershop for a bi-weekly or monthly haircut.

Pruning hydroponic roots may cure root rot, but it is not a guaranteed solution.

More importantly, whether or not trimming the roots will cure them of root rot or any bacterial or fungal infection depends on what shape they are in at the time of pruning.

If the plant and the roots are generally healthy except for a bit of root rot caught early on, most times it is curable.

How To Prune Hydroponic Roots

Now that we’ve discussed everything you need to know about hydroponic root management, it’s time to talk about the actual trimming process for hydroponic roots.

The steps to pruning hydroponic roots are straightforward:

Don’t be afraid to really get in there and trim your hydroponic plant’s root system as much as necessary.

Keep in mind that because they are formed and growing in a hydroponic system, the roots grow back incredibly quickly.

What NOT To Do When Pruning Hydroponic Roots

Pruning hydroponic roots is a simple process, but it isn’t hard to mess things up. Here’s what not to do when you’re in the process of trimming your roots:

Hopefully, our article answers all of your questions about caring for and maintaining hydroponic roots, including how to trim them properly!