Anyone who knows anything about gardening knows that tomatoes are among the most popular garden plants.

It shouldn’t come as a surprise then that tomatoes are also one of the most cultivated plants aquaponically.

To learn all about aquaponic tomatoes, read on below!

What Tomato Varieties Are Best for Growing Aquaponically?

Tomatoes are not just tasty when grown aquaponically, they are also quite a lucrative crop.

That said, before you get started, you must pick one of the best tomato varieties to grow with aquaponics: 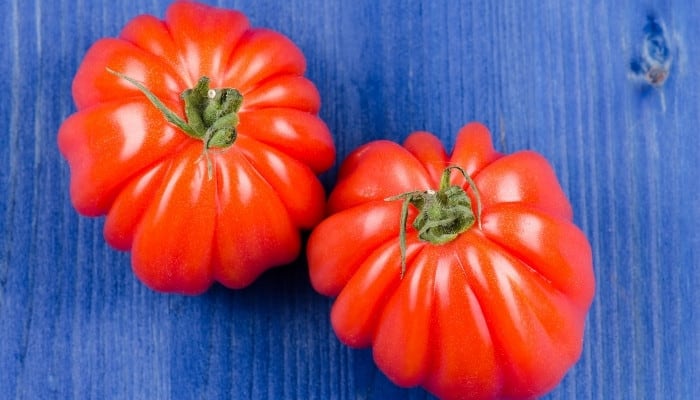 In the USA, there are few tomatoes as popular as the famous Beefsteak variety.

Comprised of several species, Beefsteak tomatoes are among the largest and juiciest of all. They take a bit longer than others to grow and ripen but are well worth the wait. 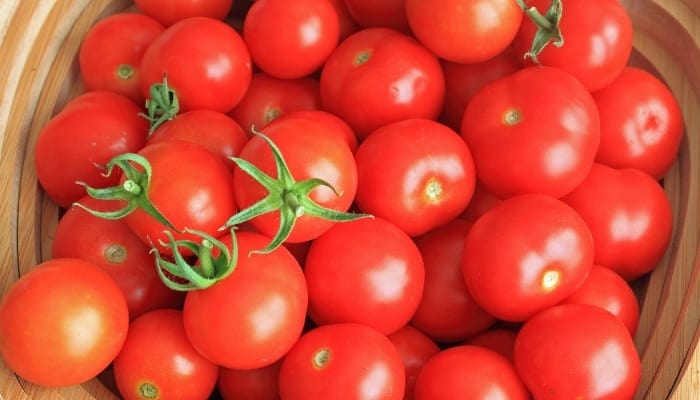 These little guys are as fun to grow as they are tasty to eat. Once planted, most cherry tomato species flower within four weeks and are ripe in another three to four weeks.

Cherry tomatoes are great for canning, eating raw, and adding to salads. 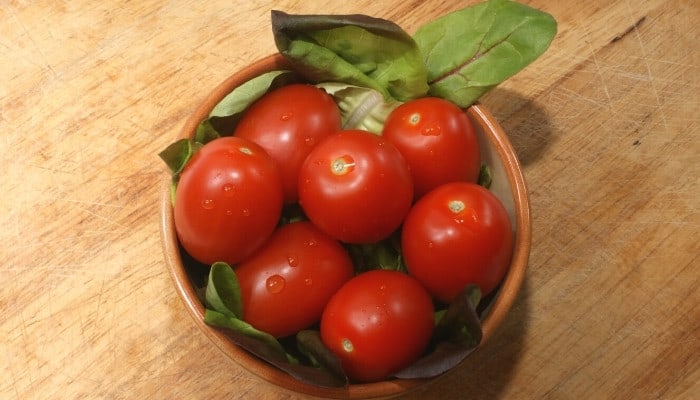 Plum tomatoes are mainly cultivated for use in sauce, salsa, or for processing into foodstuff or ingredients in general.

That said, they are considered drier than most and so aren’t eaten raw as often as others. 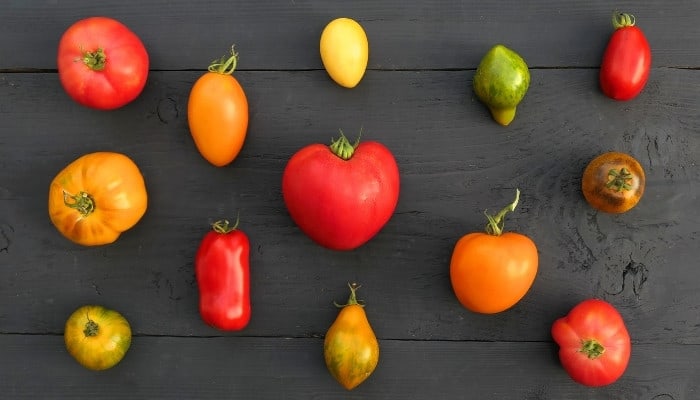 These old-fashioned tomatoes might not be as popular as they once were, but it isn’t due to their amazing flavor.

The fact is, most tomato lovers prefer heirloom tomatoes over almost any variety, but, they have a shorter shelf life than others, so many cultivators overlook them today.

Are Tomatoes Good for Aquaponics?

Tomatoes are definitely in the top tier of plant varieties to grow with aquaponics.

They are great to consume right off the vine, processed, used as ingredients, and even as juice. Furthermore, they have a considerable market value compared to other crops.

Aquaponic tomatoes grow faster than in soil. There are fewer pests to deal with and no ground-based diseases or bacterias to worry about.

Perhaps the biggest advantage of growing aquaponic tomatoes is that they grow faster, larger, and tastier.

Additionally, they are one of the easiest crops to either sell or preserve.

The biggest drawback to growing tomatoes in aquaponic systems is that they take up more space and nutrients than other plants.

That means certain types of grow systems aren’t well suited for them.

Another drawback is that tomato roots are liable to develop root rot (learn about this hydroponic issue here) if the growing system isn’t rigorously cleaned and maintained properly.

Tomatoes are an excellent plant to grow with aquaponics, but they are far from the easiest aquaponic crop to grow.

They also require a larger system with bigger grow sites and more nutrients.

That means that they cost a bit more to get started with and to maintain than other crops grown with aquaponics.

How Do You Start Tomato Seeds for Aquaponics? 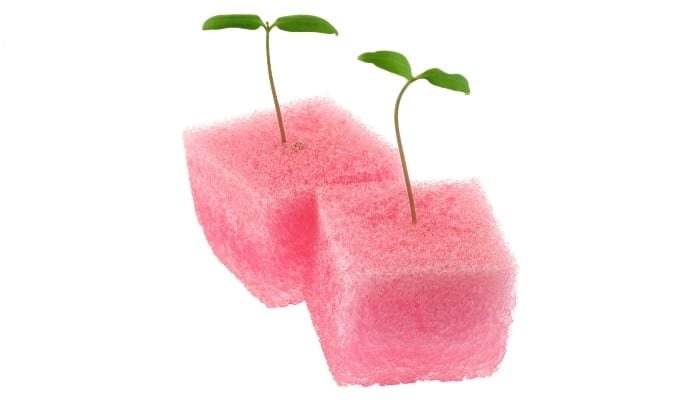 Starting tomato seeds for aquaponics is best done with:

Grow sponges (learn to make your own here).

Whichever growing medium you decide to use as your seed starter, the general process is basically the same:

Depending on the variety of tomato seeds you’re starting, sprouts will appear within 10 to 15 days.

They will continue growing for 2 to 6 weeks before they’re developed enough for transplanting into your aquaponic system.

Generally speaking, aquaponic tomatoes grow about twice as fast as soil-grown tomatoes. That means they grow to full size in as little as four weeks.

Outside of aquaponic systems, they take around six to eight weeks to reach the same level of maturity.

Cherry tomatoes are by far the fastest-growing aquaponic tomatoes, requiring under a month in some cases to start blooming.

They are ready for harvest in as little as a month and a half to two months tops.

Bigger species, such as Beefsteak and Heirloom tomatoes may require an additional week or two to begin flowering.

Likewise, they may also take up to two or three weeks longer to fully ripen.

DWC, RDWC, NFT, ebb and flow, drip, and wick hydroponic systems all work for growing tomatoes. Just about any sort of aquaponic or aeroponic setup works as well.

The biggest factor that determines whether or not a hydroponic system is suitable for growing tomatoes is the size of both the grow sites as well as the size of the tomato species you’re growing.

The system also needs to have a powerful enough water pump and adequate spacing between each plant.

How To Grow Aquaponic Tomatoes

The best method for growing aquaponic tomatoes depends on the type of tomatoes and the size of the crop you want to produce.

It also depends on the number of times you want to harvest throughout the year.

There are a couple of aquaponic methods that stand out among the others:

Once you decide the type and size of tomato crop you want to grow, keep in mind the following aquaponic tomato growing factors:

Aquaponic Tomato Yield – What To Expect?

Tomato plants are capable of producing anywhere from less than 10 pounds to over 30 pounds of individual fruits.

Depending on the species, that breaks down to around 25 to 100 tomatoes per plant.

Aquaponic tomato growing is well worth the investment, whether for personal or commercial purposes.

However, these juicy red wonder fruits are not without their fair share of possible issues.

Here are a few of the most common problems with aquaponic tomatoes and how to solve them:

Wilt diseases are among the most regularly occurring issues with growing tomatoes.

The most common reasons for wilting leaves include the spreading of disease from one plant to another, which somehow become infected by fungi or from water that has not been sanitized properly.

Solving the issue of wilting tomato leaves is simple. Remove the plants that are infected and replace them with new ones.

Likewise, change out the water, scrub your reservoirs down, and practice more cautious sanitation in the future.

Another of the most common problems with growing tomatoes in water is root rot.

When water temperatures become too warm, typically from light exposure, Pythium spores are produced and multiply. This leads to the rotting of otherwise healthy plant roots.

The best way to solve the issue is to prevent it by regulating water temperatures. Keeping your aquaponic water reservoirs covered also helps protect them from excess light.

Alternatively, if root rot occurs, you must prune the discolored roots and change out the water as well as clean the system.

The occurrence of gray mold and powdery mildew are a couple of the leading problems with growing tomatoes aquaponically.

You can identify gray mold by the lesions that pop up on the stems and leaves. Powdery mildew appears almost identical, though white spots on leaves also appear.

Thankfully, gray mold and powdery mildew can both be eliminated by increasing ventilation and reducing the humidity level the plants are exposed to.

If possible without killing your plants, remove any severely infected areas as well.

There are numerous reasons that aquaponic tomatoes may not be receiving enough water or oxygen.

The first is that the water pump you’re using may not be pumping enough gallons of water per hour through the system.

The second is that your airlines have a leak, your air stones or filters need to be cleaned, or the air pump isn’t powerful enough.

Another real possibility is that you don’t have enough fish in your system. Or, you may have a fish species that isn’t ideal for growing tomatoes.

All of the above are easy fixes: check your pumps, filters, airstones, and fish. When the issue is revealed, take immediate action to resolve it.

Growing aquaponic tomatoes is a fun and rewarding experience.

It either puts a whole lot of tasty fruits on your plate and in your fridge and pantry, or some extra cash in your pocket from the local market.

Following our guide and referring back to it as often as needed, you’ll be growing the best aquaponic tomatoes around in no time.