Cilantro, that tasty green herb, is actually two popular seasonings in one: the leaves are called cilantro and the seeds are coriander.

It is just as often used in medicine for everything from toothaches to cancer as it is eaten.

Growing your own ensures you with a steady supply of fresh and healthy cilantro.

Can you grow cilantro hydroponically? Hydroponic cilantro (coriander) is an easy-to-grow plant compared to other popular hydroponic crops like peppers and tomatoes. Like lettuce, cilantro doesn’t take up as much room, uptake as much food, or require as much space as other common hydroponic plants.

Read on below and learn all that you need to know about growing cilantro hydroponically.

Growing Cilantro Hydroponically: What You Need To Know

Cilantro isn’t an overly complicated plant to grow hydroponically. That said, as with any hydroponic crop, you will need a few basics before you get started.

What you need to get started:

From seed to harvest, expect the process to take between one and a half to two months.

Following the guide below, you should be munching on your own hydroponic cilantro in just a few weeks!

Cilantro is best started in rockwool cubes (find bargain-priced cubes here) or coco-coir starters. Typically, the seeds need only a week and a half or so to sprout.

After germination occurs, transferring the seedlings should happen immediately.

Make sure that you get them transplanted into the permanent growing medium before their roots begin rapidly developing.

Carefully remove the cilantro seedlings from their starters and place them in the growing site, half-filled with growing medium.

Once the roots are secure, fill the rest of the grow site up with growing medium.

Cilantro can withstand temperatures of as low as 10°F and as high as nearly 90°F, but the ideal temperature is between 50°F and 80°F.

All things considered, cilantro does better in slightly cooler weather.

Generally speaking, the EC level affects how well your cilantro will be able to uptake nutrients and water through its roots. The ideal EC level for cilantro is 1.5.

In this article, I explain all about EC, pH, and how to adjust them in your system.

Nine to 12 inches is the ideal spacing for hydroponic cilantro.

Spacing plants by these measurements allows enough room for fully developed cilantro once they begin to mature and take up more space.

Cilantro plants require somewhere between 12 and 14 hours of indoor lighting per day.

Outside, they can do with less. LED lights are recommended for fast and steady growth of hydroponic cilantro.

As far as nutrients go, a high nitrogen and phosphorus content is preferred by hydroponic cilantro plants.

Something along the lines of a well-balanced 10-10-10 fertilizer is perfect.

The nutrients need to be topped off regularly. Replacing the water and nutrients completely should be done at least every few weeks.

Hydroponic cilantro is generally ready for harvest around 50 to 55 days after planting from seeds.

If counting from germination time, the harvest time is anywhere from 40 to 48 days.

Pick the leaves by hand or use scissors to trim back entire sections of the plant away from the stem.

Separate the leaves and tie them into bunches with string after checking them for pests and dead parts.

Drying cilantro is as easy as hanging the bundles up in the air.

Check back in 1 to 2 weeks, and they should be fully dry and ready to be put into containers and used as cooking ingredients in the kitchen.

Aeroponics and ebb and flow, however, are probably the most popular hydroponic growing systems for cilantro because they allow the plants so much space compared to other hydroponic methods and setups. 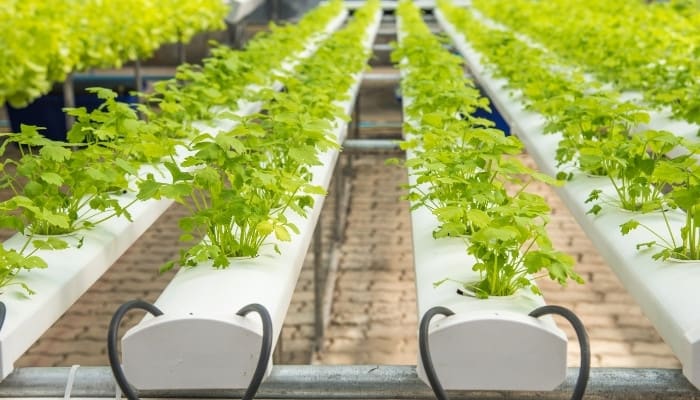 Depending on the exact type and taste of cilantro that you prefer, there are a number of varieties (in addition to those listed above) to consider for growing hydroponically.

Can You Grow Hydroponic Cilantro in a Mason Jar?

Cilantro is easily grown in hydroponic mason jars due to their non-woody nature and low space requirements.

Not only are jars with cilantro easy as pie to grow, but they also look really great on the windowsill. That said, cilantro grows well in jars with soil or hydroponic systems.

A Final Word About How to Grow Cilantro Hydroponically

Cilantro is a fun and easy crop to grow hydroponically. It grows rather fast, and it’s tasty and good for your health!

What reason could you possibly have to not start growing cilantro hydroponically (or at least planning to) today?