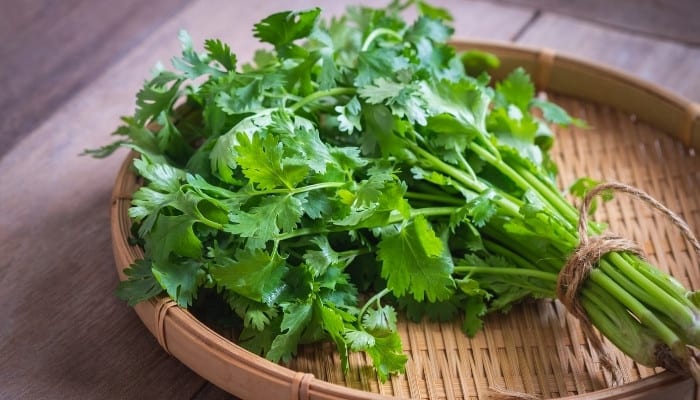 Cilantro is an annual herb that is commonly used in Latin American and Asian cuisine. It has a bright, tangy flavor that most people love.

For some people, cilantro tastes like soap thanks to specific genes they have, but this is not the norm. Most folks agree that this herb is a great addition to your garden for food or beauty.

How do you harvest cilantro? Cilantro is very easy to harvest. Simply use clean scissors to trim off as much cilantro as you need. It is best to only remove up to one-third of the plant at a time. This allows the plant to easily regrow. Stems are edible and may be left attached or trimmed off, depending on your preference.

Frequent harvesting is actually helpful in preventing the cilantro plant from bolting (producing flowers and seeds).

It causes the plant to focus its energy on producing more foliage instead of flowers. The plant will grow fuller and stronger with repeated harvests.

Let’s take a look at how to do it the right way.

How To Harvest Cilantro

Harvesting cilantro is as easy as cutting off as much of the foliage as you need. It doesn’t matter if you remove only leaves or include the stems; the plant will be able to grow back.

How To Harvest Fresh Cilantro Leaves

To harvest fresh cilantro, begin by getting some clean, sharp scissors for cutting. Remove up to one-third of the plant (if you would like it to regrow).

Make sure that the portion of the cilantro plant that remains has a couple of leaves. The leaves are necessary for the plant to create energy and regrow.

You can take your first harvest from a young plant as soon as the leaves are large enough. Just be mindful of how many leaves you are taking when the plants are still getting established.

Should You Remove Cilantro Stems?

You do not need to remove cilantro stems, but you can if you prefer. The stems have the same great flavor as the leaves and can be used in cooking.

How To Store Fresh Cilantro

The best place to store fresh cilantro is in the refrigerator. Wrap the harvest in a slightly damp paper towel and place it in the crisper drawer.

If you have a large bouquet of cilantro, it can be placed in a jar of water. This will keep for up to three days on the counter or 10 days in the refrigerator.

Can You Freeze Fresh Cilantro?

You can freeze fresh cilantro. The leaves dry out if frozen whole, so it is best to blend them first.

Blend the leaves with a small amount of olive oil. Spoon the mixture into an ice cube mold and freeze. Pop out as many cilantro cubes as you need for future recipes.

How To Dry and Store Cilantro Leaves

Drying cilantro is not the recommended method for storing your harvest. The herb loses most of its flavor during the drying process.

Instead, use ground coriander seeds, which will provide a similar flavor when cooking.

If you would still like to dry fresh cilantro, use a dehydrator for individual leaves. For a large bunch, you can hang it upside down in a dry, dark location.

Once the leaves have lost their moisture, they can be crushed or powdered for future use.

When To Stop Harvesting Cilantro Leaves

As long as the plant is alive, you can continue to harvest delicious cilantro leaves.

If you take a particularly large harvest, it is recommended to give the plant some extra time to recuperate. Wait two weeks until you harvest the cilantro again.

How To Harvest Cilantro Seeds (Coriander)

Once the cilantro bolts (flowers), it will produce small green coriander fruits.

To collect the coriander, pick the stems containing seeds once the seeds start to dry out and brown. Place them upside down in a paper bag.

As the seeds dry out completely, they will separate from the flower bud.

What Do You Do With Green Coriander Seeds?

Coriander seeds are used once they’ve dried out. If you collect green seeds, allow them to dry out before using them.

The seeds can be used whole in pickling, ground in cooking, or replanted to produce more cilantro plants.

Does Cilantro Grow Back?

How Long Does a Cilantro Plant Last?

Without harvesting, a cilantro plant will grow, produce flowers and seeds, and die within a few weeks.

Harvesting prevents the plant from going to bolt because it focuses its energy on producing more foliage.

Will Cilantro Grow Back Every Year?

If allowed to bolt and drop seeds, your cilantro plants will self-seed. This is why it is recommended to let at least some of your plants go to seed.

You can also collect the seeds to replant yourself the next season.

How Do You Keep Cilantro Growing All Summer?

Harvesting up to one-third of your cilantro plants occasionally will promote new growth and delay the plant from producing flowers and then dying.

Should You Let Cilantro Flower?

If you would like to collect coriander seeds, you should let your cilantro plant produce flowers. The seeds can be collected for cooking or replanting.

You can also allow the plant to produce seeds and drop them in the same area. This self-seeds the area for the next growing season.

Allowing at least some of your cilantro plants to flower also invites helpful pollinators to your garden.

Does Cilantro Grow Well in Pots?

Cilantro grows well in pots. These herbs produce a long taproot, so you will need to plant cilantro in a deep pot (at least 12”).

Your pot should have drainage holes because cilantro roots do not do well when they are sitting in wet soil.

How Do You Grow Cilantro in Hot Weather?

Slow-bolt varieties of cilantro are best suited for hot climates because high temperatures induce bolting. Place your cilantro plant in a location that receives shade during the hottest part of the day.

Another option is growing your cilantro indoors if your climate proves to be too hot.

Since harvesting cilantro is so easy (and recommended for the health of the plant), there is no reason not to add this delicious herb to your garden.

Nothing beats the smell and flavor of freshly picked cilantro in your home-cooked meals.