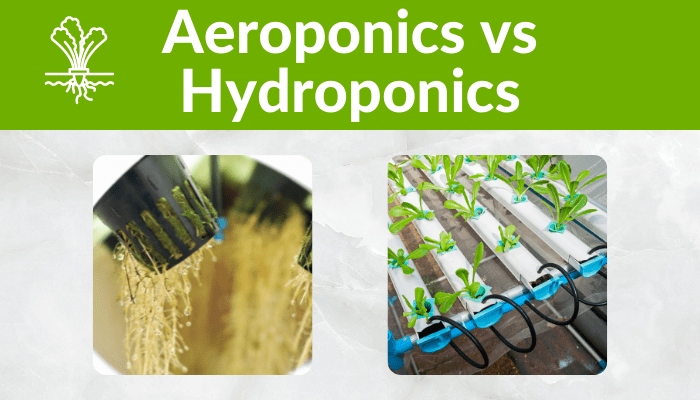 In the world of soilless gardening, definitions of two “advanced” grow methods are bounced around more than any others, hydroponics, and aeroponics.

Both aeroponics and hydroponics are well-proven techniques for growing a wide variety of fruits, vegetables, herbs, flowers, even trees, and shrubs.

But, before simply choosing the one that seems the easiest or most affordable to do, there are several key differences that you need to know about.

Main Differences Between Aeroponics and Hydroponics

Read on below to learn more as we break down the differences between aeroponics and hydroponics and separate them with a fine-tooth comb!

The differences between aeroponics and hydroponics are quite extensive, albeit the systems are closely related in many aspects.

The difference between how water and nutrients are delivered in hydroponic and aeroponic systems is one of the biggest.

Nutrients are added to the water reservoir of aeroponic systems. A water pump pushes water up through tubes or hoses and out onto plant roots via nozzles. Essentially, the water and nutrients are sprayed or misted onto the roots.

Nutrients are also manually added to the water supplies of hydroponic systems. However, there are numerous delivery methods. Besides being directly submerged in water, or anchored directly above the water source, plant roots are also fed water and nutrients via dripping, wicking, flooding, or steady trickling of nutrient solution.

The general differences in layout and design of common aeroponic and hydroponic systems are noticeable even to complete beginners.

The most common system designs for aeroponics are grow towers. These vertically aligned growing systems have a basin filled with water and nutrients at the bottom. There is also a water pump and tubes or hoses connecting to sprayers.

Further, they tend to have a narrow body with vertical grow sites built into the sides and are often round or semi-round in order to provide more growing space for plants.

The number of hydroponic system designs is phenomenal. From DIY to pre-made systems, there are countless versions. 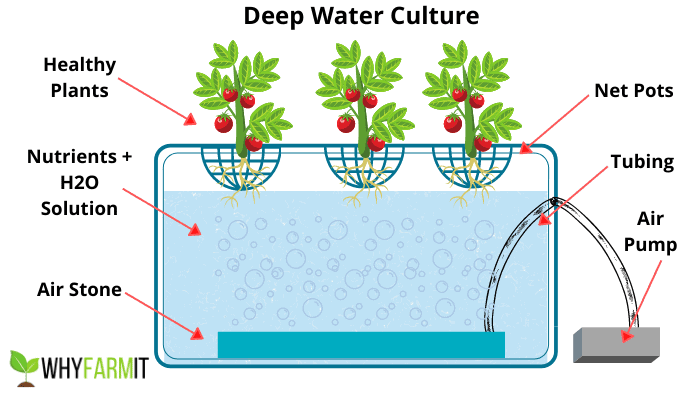 The most popular systems tend to be oblong and rectangular. Most of them feature either built-in grow sites directly above the main reservoir. Others feature offset or raised grow beds, buckets, or grow pipes.

Depending on the shape, size, and overall design, aeroponic and hydroponic systems can be vastly different… or barely differ at all.

Depending on the shape and size of the hydroponic system, the space required varies greatly. For smaller systems designed for personal use or educational purpose, little more room than a TV and a small entertainment stand is needed.

That said, larger systems obviously take up a much more considerable amount of space. Some hydroponics setups fill entire yards or warehouses.

The way that plants are supported in various aeroponic and hydroponic setups is another of the most significant differences between the two systems.

Aeroponic systems normally house several dozen grow sites that anchor plants into the sides of the unit. They are supported by net pots and sometimes some sort of lightweight material such as foam or plastic is used to help hold them into place more securely.

However, aeroponic systems are mainly geared towards lightweight crops, to begin with such as cherry tomatoes, strawberries, microgreens, and other small plants.

Hydroponic growing systems tend to offer a great deal of extra support to plants in comparison to aeroponic grow towers. That’s why you may see tomatoes, cucumbers, even eggplants and watermelons growing by hydroponics.

You won’t see such large or heavy plants growing in aeroponics because they lack the ability to support as much weight as hydroponic systems.

The way the plants are exposed to oxygen by these two popular growing systems can be incredibly different.

Plants growing via aeroponic systems are exposed to a much higher level of fresh oxygen than many hydroponic systems, especially poorly maintained hydroponics. That’s because, in aeroponic systems, the plants themselves are actually anchored in the air with their roots entirely exposed. That means they have full and constant exposure to oxygen.

Plants that are grown in hydroponic systems often rely on an air pump to blow air through tubes and air stones to aerate them. Once oxygen is introduced to the system in this manner, it is then transferred through the water and into the plant’s roots. Of course, the plants may also absorb some amount of oxygen from the actual air space around them.

There is a huge difference between the amount of water used by aeroponics and hydroponics, to say the least.

The amount of water required to fill an aeroponics system varies depending on the size and type of system. But, generally speaking, they tend to take less water than other forms of hydroponics by a longshot.

Even more, thanks to their design, most aeroponic grow towers are built to reduce evaporation (therefore less water is lost during the systems watering cycles).

Hydroponic systems tend to take quite a bit of water. Not only do they hold 10, 20, 50, even 100 gallons or more to begin with, but they also require a full water change every couple of weeks or so.

On top of that, depending on the specific setup, there may also be a bit of evaporation to deal with as well. Hence, it is safe to say that hydroponics requires more water than aeroponics.

The list of plants that are possible to grow in these iconic systems is another giant difference between the two.

Large and medium-sized plants, however, are not off-limits for aeroponics but will require some sort of extra support (like a table or shelving) to hold the plants.

Because of all the various types of hydroponics that exist, nearly all plants are growable in one hydroponic system or another.

That said, some of the most popular plants to grow with hydroponics include tomatoes, peppers, basil, mint, watercress, lettuce, spinach, beets, radishes, and other vegetables and herbs.

Dwarf fruit trees, as well as berry bushes, are also able to be grown via hydroponic systems.

Aeroponic systems are often advertised as some of the fastest-growing units on the market. Many aeroponic setups are able to grow plants healthier, larger, and up to three times faster than soil-based growing. On top of all that, they may also increase the yield of crops by 50-percent.

The amount of maintenance that is required by both aeroponics and hydroponics is dependant on the exact setup, its location, weather conditions, and other factors.

Aeroponic systems may be considered the easier of the two to maintain due to their vertical layout, built-in grow sites, and smaller-sized reservoir.

But, you still need to change the water every couple of weeks, go over all of the components looking for signs of wear and tear, and keep water levels topped off regularly. There are also pH and EC levels to monitor daily.

Depending on the type and size of your hydroponic system, the maintenance may vary from light duty to extremely demanding. Basic hydroponic maintenance includes topping off water, checking temperatures and pH levels of the water, adjusting nutrients as needed, and more.

The most important maintenance factor with hydroponic systems is routinely performing a complete water change and cleaning the components of the system every two weeks or so. Failure to do so only results in even more work and a less stable system.

Yet another huge difference between aeroponics and hydroponics is the level of skill and knowledge required to get started with either one.

Knowledge and skill level are irrelevant for beginner-friendly aeroponic systems thanks to their easy-to-use designs and automated features (like automatic timers and sprayers).

For larger systems, and growing multiple crop types, as well as keeping your operation running all year long, a good bit of experience is needed.

People of all knowledge and skill levels can easily get started with DWC hydroponics. The systems are straightforward and super easy to learn.

More advanced systems with more complex and interworking parts, like NFT, Ebb and Flow, and custom-made setups require a great deal of experience for successful operations.

Lastly, the price for getting started with aeroponics and hydroponics is sometimes a big, BIG, difference.

Aeroponics can be one of the cheapest routes to getting started with advanced growing systems. Due to their lightweight and space-saving design, as well as the lack of additional pipes, tubes, and extra pumps that many hydroponic systems require, aeroponic systems tend to come with a much smaller price tag.

Hydroponic systems range in price from barely $50 to well into the thousands of dollars. Depending on the size, type, and other factors like whether you need additional lights, filters, or special nutrients, the costs can add up rather quickly and steeply.

There are three main variations of aeroponic systems; low-pressure, high-pressure, and ultrasonic.

Hydroponic systems come in many shapes, sizes, and varieties, below are the six most common types:

Which Is Better – Aeroponics or Hydroponics?

There is no one-for-sure answer to the question of whether aeroponics or hydroponics is the better growing method. The truth is that which of these two systems is best for you and your needs boils down to several factors (including your own opinion).

Below, we take a close look at the pros and cons of both aeroponics and hydroponics. After careful consideration, the answer to which is better for you should be much clearer.

The Pros and Cons of Aeroponics

The Pros and Cons of Hydroponics

When Aeroponics Might Be the Right Choice for You

If you are interested in growing indoors, producing small veggies and herbs on a small scale, or even interested in the farming of small crops like lettuce, strawberries, or cherry tomatoes, you can’t go wrong with aeroponics.

If you are into personal gardening, enjoy growing both inside and outside, or simply want to educate yourself (or children) about advanced growing systems, hydroponics is the way to go.

In addition, if you want to grow larger crops than small simple veggies and herbs, hydroponics is undoubtedly the right choice for you.

Bubbleponics is a simplified version of deep water culture hydroponics that involves growing sites built into the lids of bucket reservoirs. Air stones in the bottom provide the bubbles. These setups are oftentimes referred to as bubble buckets.

Is Aeroponics Good for the Environment?

Aeroponics is beneficial to the environment in the sense that it reduces the use of fertilizer and pesticide (and runoff into waterways) as well as helping conserve water.

Differences and When to Use Aeroponics vs Hydroponics

Aeroponics is a simple form of hydroponics that is great for growing small fruits and leafy vegetables. Hydroponics includes a wide variety of various growing systems and is suitable for nearly all types of crops.

Hopefully, our article helps you determine which and when each system is right for you and your gardening or farming needs.