Mushroom foraging is a unique hobby with a cult following. However, with over 14,000 species of mushrooms, it can be hard to know which fungi are edible, toxic, or psychedelic.

This guide will go over some commonly found species of toxic mushrooms that you should avoid.

If you’re planning on mushroom foraging, I highly recommend picking up this field guide for North American mushrooms. 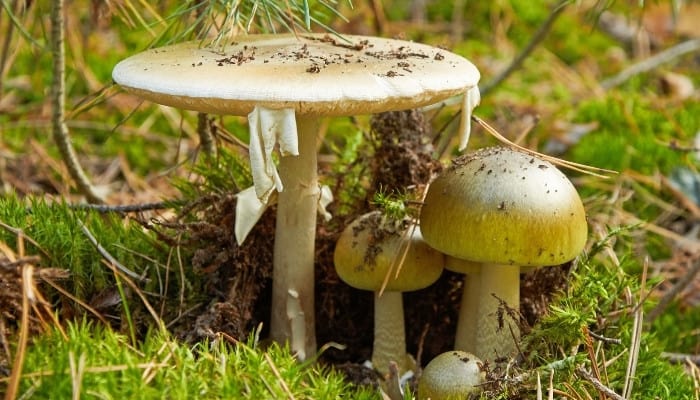 Death cap mushrooms are generally found in Europe but can now be found in other regions thanks to cultivation of non-native tree species.

These deadly mushrooms have a white stem, white gills, and a white to light-green cap.

It has earned the name death cap because it is one of the most toxic mushrooms in the world; as little as half of a mushroom can kill an adult. 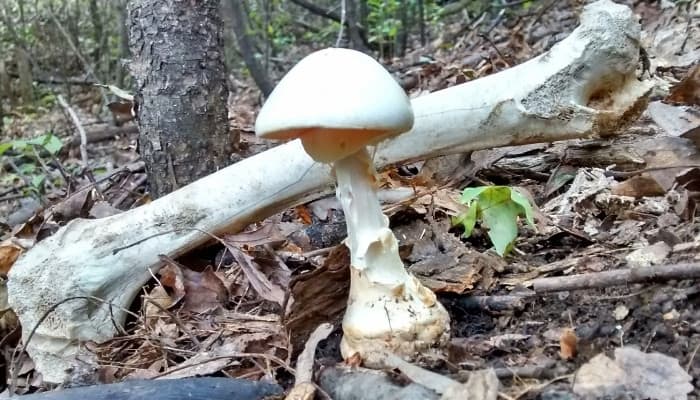 Destroying angel is a name most commonly associated with Amanita bisporigera, but the name is also used for A. ocreata, A. virosa, and A. verna.

Originally believed to be separate species, scientists now believe these are all variations of A. bisporigera.

These mushrooms are all white and are considered to be one of the most toxic mushroom species in the world. 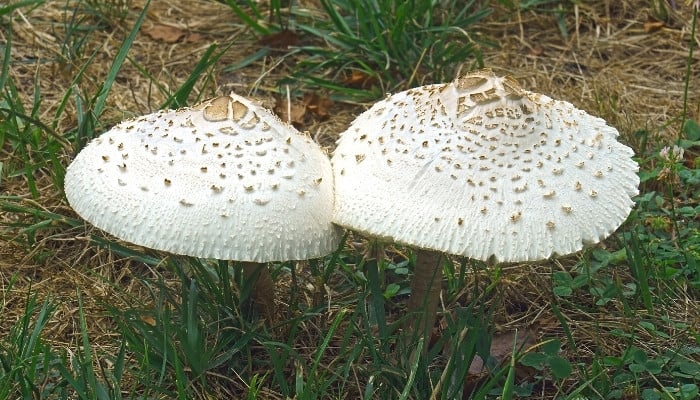 While the false parasol is the most frequently ingested poisonous mushroom in North America, it is thankfully not deadly.

This mushroom causes gastrointestinal issues, such as vomiting and diarrhea, when consumed.

The false parasol is commonly found in manicured lawns, which is one of the reasons why it is commonly consumed.

The mushroom is large with an off-white cap resembling a parasol that sticks out among the surrounding grass. We cover this mushroom in depth here. 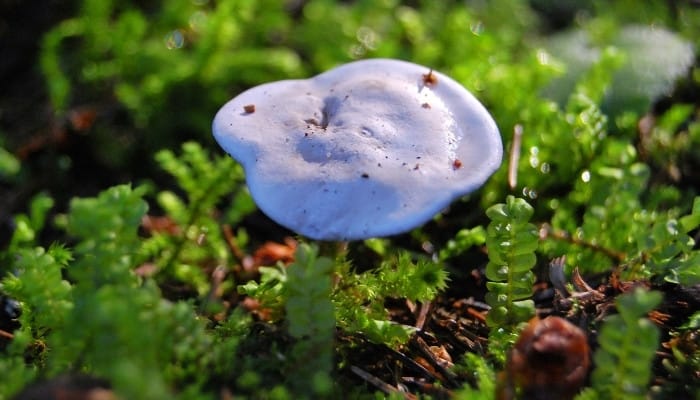 The ivory funnel is a predominately white, funnel-shaped mushroom that is found in grassy meadows and lawns.

The main symptoms of poisoning include sweating and salivation, but abdominal pain and digestive issues can also occur.

Death due to poisoning rarely occurs, and there are multiple antidotes available. 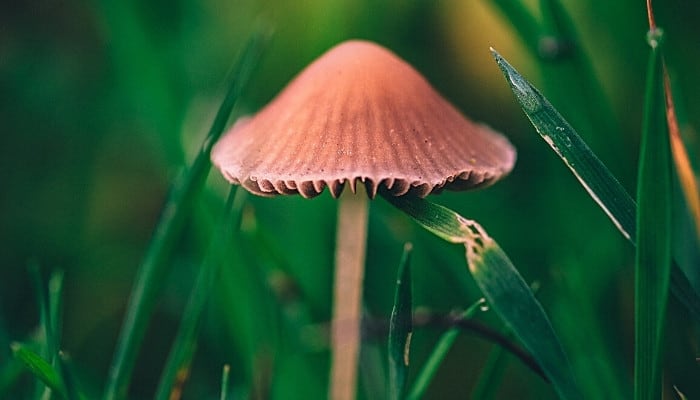 This tall, thin mushroom has a brown cap. The mushroom contains amatoxins, which affect the liver and can cause fatal poisonings 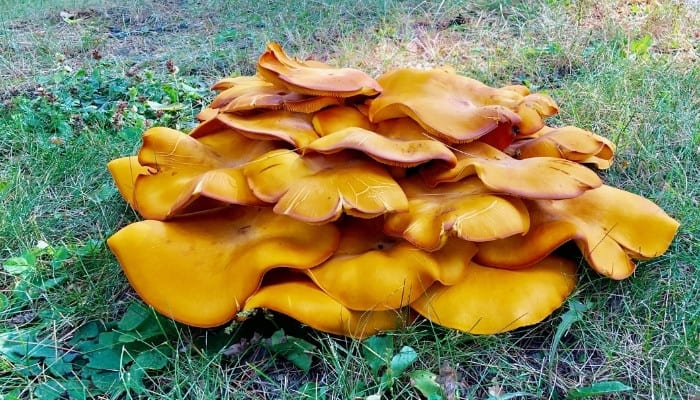 The jack o’lantern mushroom is a large, orange fungus that is usually found with multiple caps.

When freshly picked, these mushrooms have a green bioluminescence around the gills.

Since these mushrooms are mistaken for chanterelles, they are regularly eaten cooked.

However, the toxicity remains whether they are raw or cooked, and most people experience digestive issues. 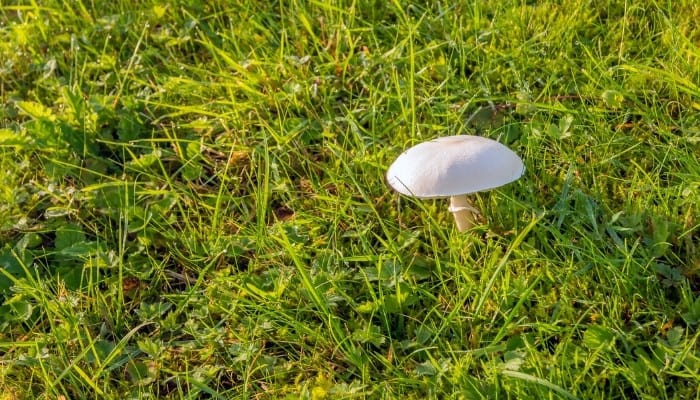 The fool’s funnel is similar to the ivory funnel. It can also cause sweating and salivation when ingested with death rarely occurring.

This mushroom is all white, with a funnel-shaped cap. The fool’s funnel can form fairy rings in grassy meadows. 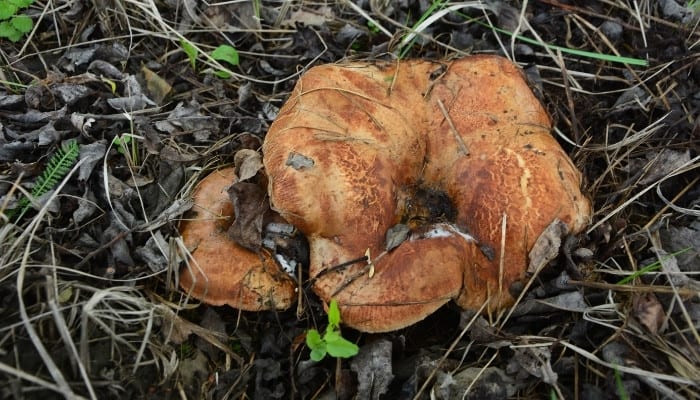 The brown roll-rim can be found in various shades of brown caps with the edge of the cap rolling inward.

This mushroom was eaten, cooked or preserved, up until around World War II.

While the raw toxicity was known, it was previously believed that cooking the mushroom made it safe to eat. 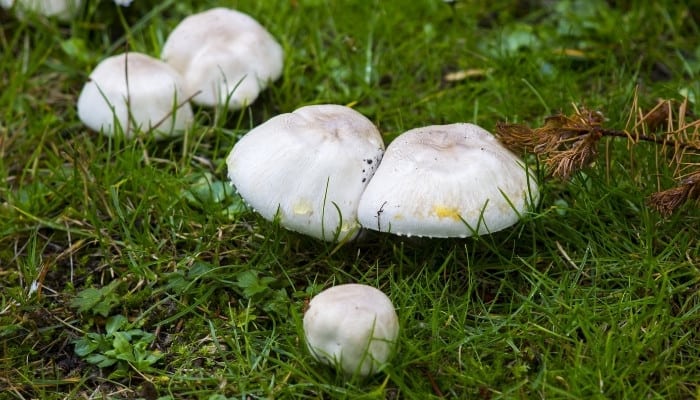 The most distinguishing feature of the yellow stainer is a yellow color that appears when the mushroom is cut (typically seen at the base when picked).

If the mushrooms are cooked, the entire mushroom becomes yellow and puts out a strong odor.

Some people have no ill effects from eating yellow stainer, but most people experience digestive irritation. 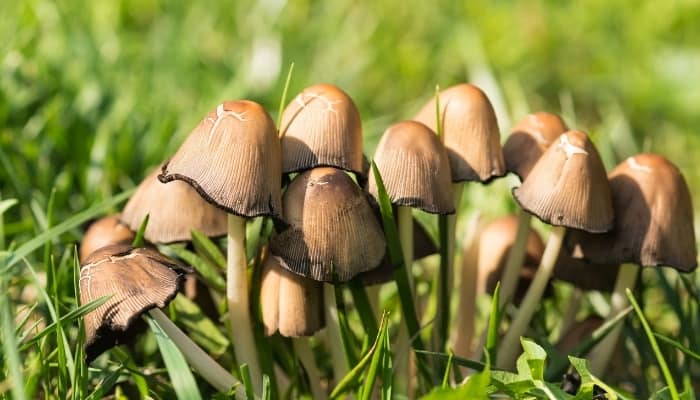 The inky cap is an interesting mushroom because it is actually edible.

However, when consumed with alcohol (or if alcohol is consumed up to three days after consumption), it causes digestive distress, increased heart rate, and tingling limbs.

Due to this, it is sometimes administered as a treatment for alcoholism. Inky Cap has a gray-brown cap that starts bell-shaped and then flattens out over time.

More Poisonous Mushrooms To Be Aware Of 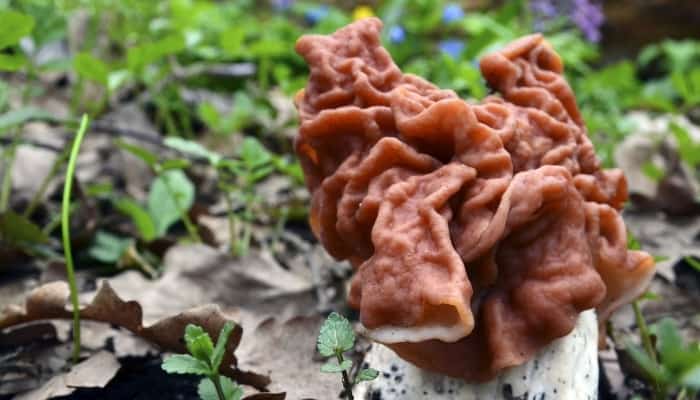 The brain mushroom gets its name from the large brain-like cap on the mushroom. It is usually dark brown in color.

This mushroom has fatal toxicity when eaten raw, but it is regularly consumed after cooking and is considered a delicacy in some regions.

Poisoning includes vomiting and diarrhea, which can be followed by coma and death in severe cases. 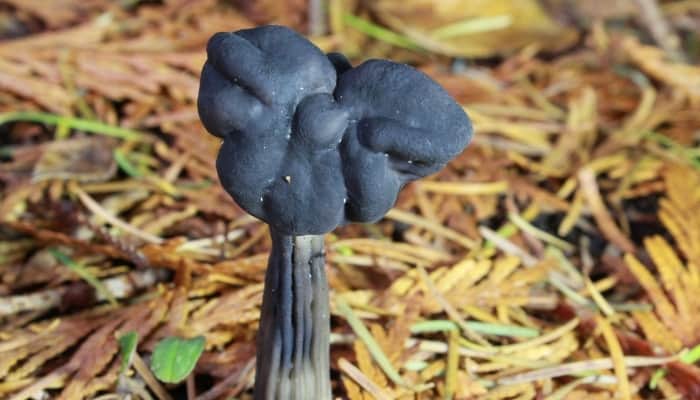 The elfin saddle gets its name because the red cap of the mushroom takes a saddle shape when mature.

Like the brain mushroom, elfin saddle is sometimes thought to be edible after cooking, but this is untrue.

The toxic compound, gyromitrin, found in the mushroom is considered a carcinogen, even in small doses. 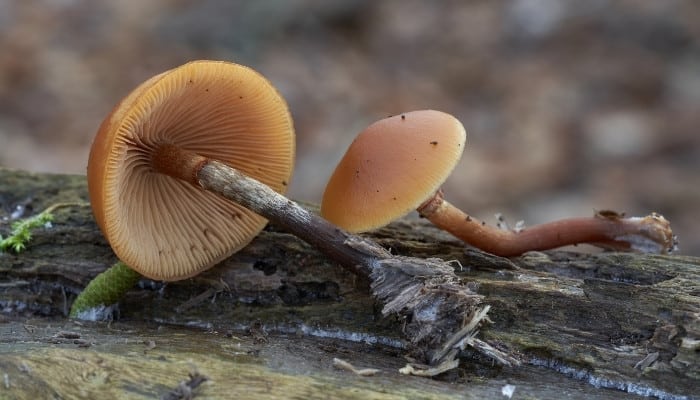 The autumn skullcap has a yellow-brown cap that starts off rounded and then flattens as the mushroom matures.

Like the death cap, this mushroom contains amatoxins that affect the liver and can be deadly if untreated. 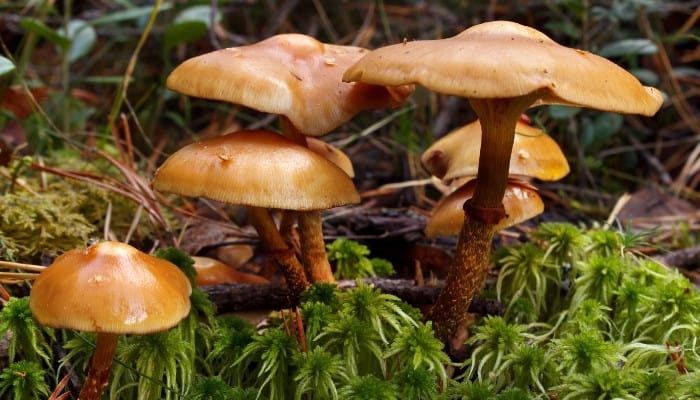 Deadly webcap and fool’s webcap belong to a group of mushrooms known as Orellani. 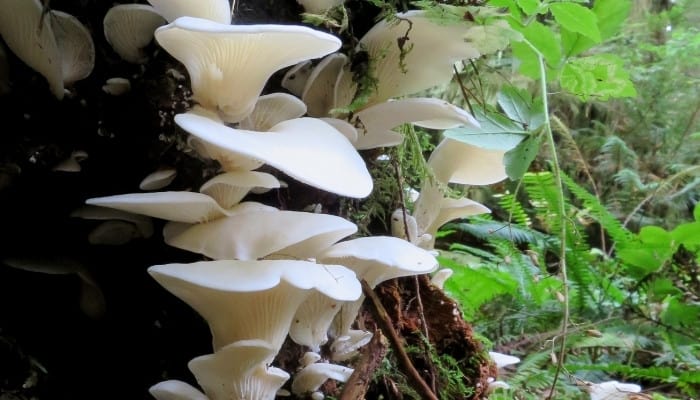 Angel wing mushrooms are thin and flat, unlike the common “toadstool” appearance of many mushrooms.

They typically begin pure white and transition to a faint yellow color as the mushroom matures.

The mechanism for toxicity is unknown, but it can cause fatal encephalopathy in people with pre-existing conditions. 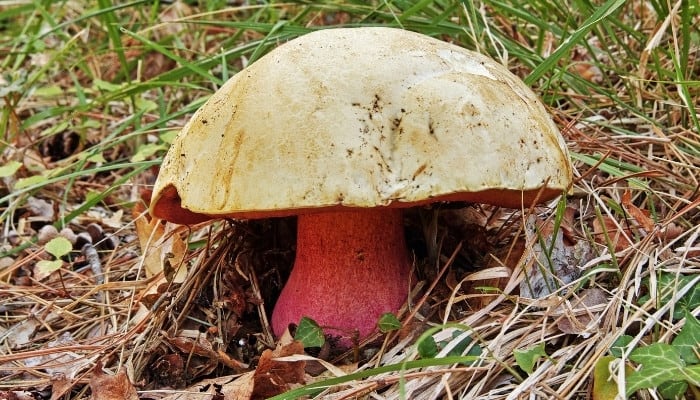 The two species that have the common name satan’s bolete are within the same genus, but R. satanas is found in Europe, and R. eastwoodiae is found in North America.

Both species are short, fat mushrooms that turn blue when cut. 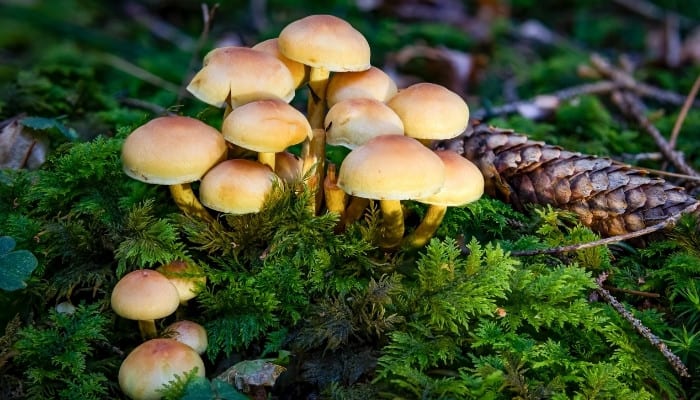 The sulfur tuft is named for its yellow-colored cap. The gills turn from yellow to green as the mushroom matures.

This mushroom causes digestive distress in most cases, but it is capable of causing impaired vision and paralysis. 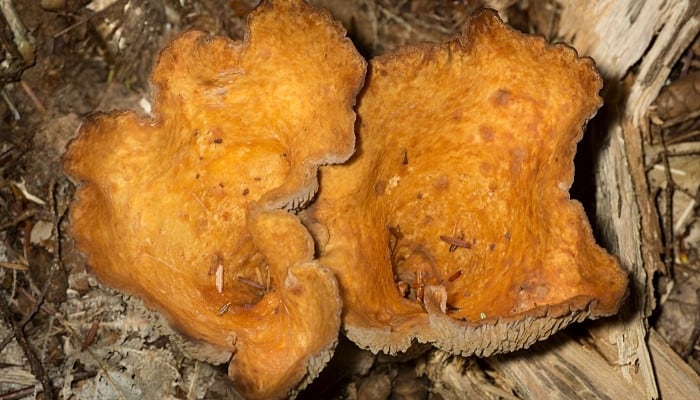 The scaly vase chanterelle has a large trumpet-shaped body with an orange cap. The outside is covered in wrinkles and is usually a light beige color.

While this mushroom can cause digestive issues for some people, there are many tribes throughout the world that eat it without issue. 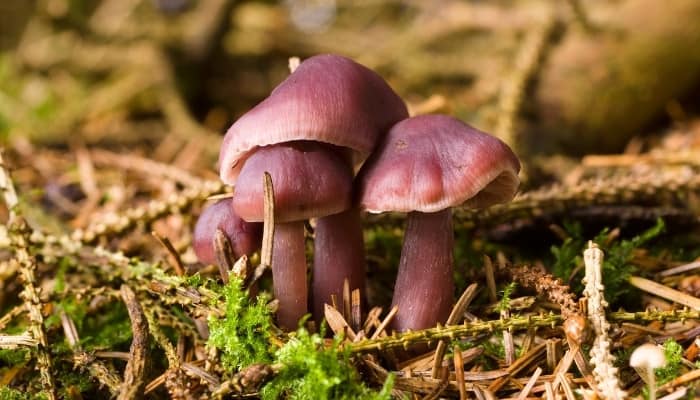 The lilac bonnet has a wide cap that is white to light purple in color. It exhibits bioluminescence and is known to contain multiple toxins.

While it is known to contain toxins, the effects when eaten are inconclusive. 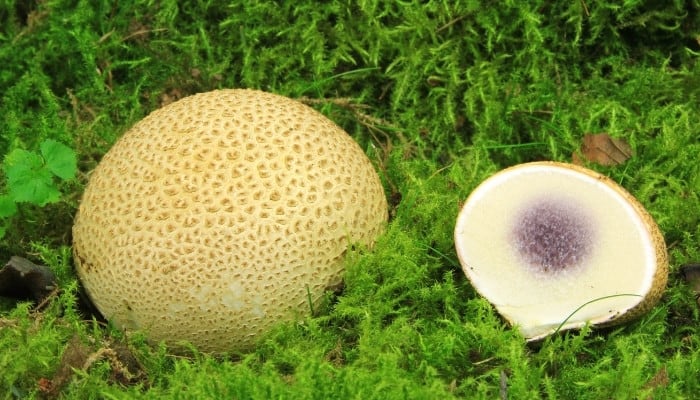 The common earthball is a type of mushroom that releases its spores when broken open. It does not have a stem and the round ball is covered in light brown spots.

When ingested, this mushroom can cause digestive issues and the spores can irritate the nose, eyes, and mouth if released. 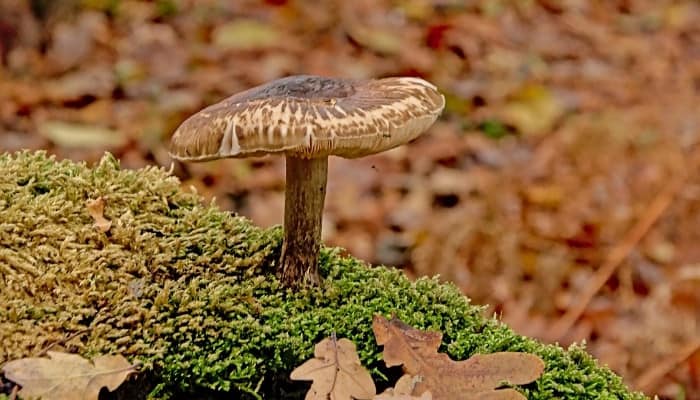 The deadly dapperling has a light-brown scaled cap and white gills.

It is commonly found in public green spaces and unfortunately resembles many species of edible mushrooms.

When ingested, this highly toxic mushroom causes digestive distress followed by liver damage. It can be fatal if not treated properly. 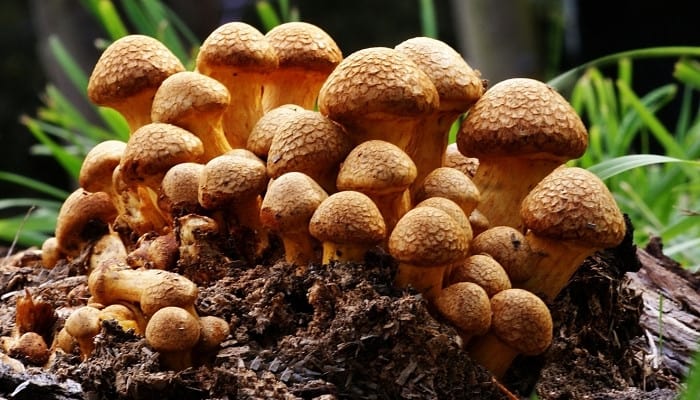 Laughing Jim mushrooms are bright orange in color and darker to a reddish brown as they mature.

While the mushroom contains a neurotoxin, there is not much recorded information on poisonings in humans. Laughing Jim is considered inedible due to its bitter taste. 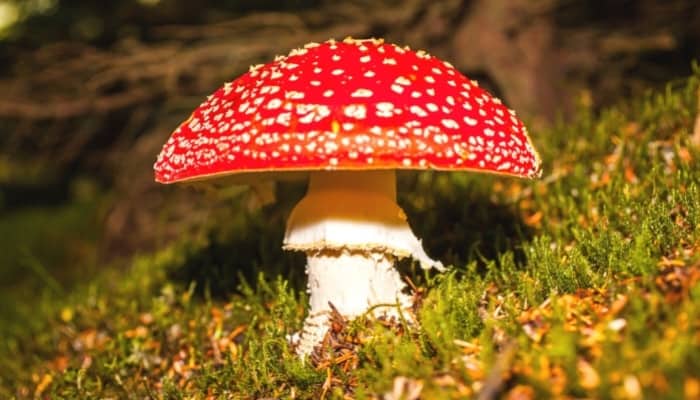 The fly agaric is the most iconic “toadstool” species of mushroom. It has a white stem, white gills, and a red cap covered in white spots.

Fly agaric is the inspiration for cartoon and video game mushrooms.

While this mushroom is well-recognized, fatal poisonings are rare thanks to modern medical treatments.

Poisonings can have a variety of symptoms, from digestive issues to psychedelic effects, because there are multiple subspecies of fly agarics. 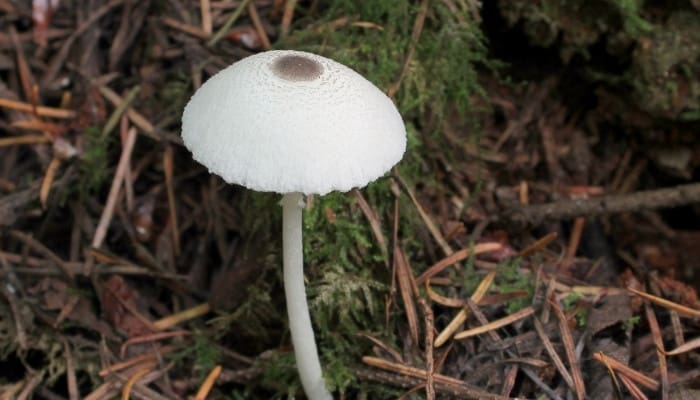 The Lepiota genus contains approximately 400 species of mushrooms and most of them are toxic. No Lepiota species are considered edible, but some are considered fatally poisonous.

This is because they contain amatoxins, just like the death cap. Most Lepiota species are white to brown in color and may have a scaled or smooth cap.

It is always important to do your research or work with an expert when collecting wild mushrooms.

When you come in contact with a mushroom in your yard or garden, it is always better to err on the side of caution and assume that it is poisonous.