Marigolds are a popular perennial flower for landscaping and gardening.

They look amazing in their reds, yellows, and oranges, take very little care compared to other flowers and grow back year after year (with a bit of help).

Marigolds require six hours or more of sunlight, watering twice per week, and pruning at the end of the season. Mulching and fertilizing the soil are also highly recommended.

What do you do with marigolds at the end of the season? Annual marigolds are frost-tender plants and will die in late fall after temperatures drop below freezing. Cut back the marigolds to the ground with clean shears, or simply pull them up roots after they die completely. Remove the trimmings from the bed so they don’t harbor pests over winter.

In the following, we discuss exactly what you need to do with marigolds are the end of the season, including how to harvest and save seeds, prepare the bed for winter, and more.

The first step to end-of-season marigold care is making sure that it gets as much sunlight each day as possible before the winter comes.

That way it can absorb and store much energy to make viable seeds. Also, it will maintain its color longer that way as well.

The second step is making sure the marigold is receiving enough water. Water the plant’s soil, letting the water saturate and penetrate deeply.

During this time of the year the plant needs as much moisture as possible, so try watering them twice per week.

The third step is covering the soil of the marigolds with a couple of inches worth of mulch, but make sure to leave a few inches of soil open around the main stem (to avoid rotting).

The fourth and final step is to prune away the wilting flowers and damaged parts of the plant in order to promote new growth. The more new growth that occurs before the winter, the better.

These bursts of growth ensure that you’ll have flowers right up until the first frost.

The above four steps are simple suggestions, but the best end-of-season routine for you and your marigolds may look much different.

Harvest and Save Marigold Seeds

To harvest and save marigold seeds is rather simple:

Pull Up Plant or Cut at Ground Level After Frost

When you are done with your marigolds for the year, you may opt either to pull them up by their roots (so they won’t grow back again) or to prune them down to the ground after the first frost hits them.

Applying mulch at the end of the season is a great way to ensure that your garden plot isn’t overtaken by early spring weeds, and the mulch also helps hold in moisture.

Wait Until Spring To Plant Seeds

Marigolds may self-seed and produce volunteer plants all by themselves the following spring, but you need to wait until the spring before you plant your own seeds.

Technically, seeds sown early may survive the winter, but there’s no use risking perfectly good seeds (especially when they won’t grow until spring anyway). 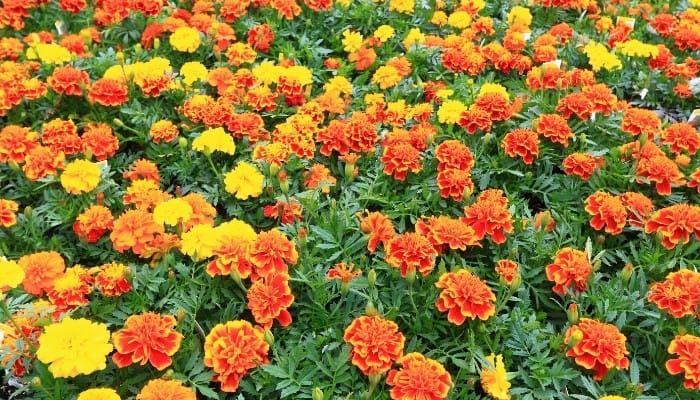 Marigolds do best when they are watered often, but you should let the soil dry out almost completely before watering. Quick-draining soil works best for these flowers.

Pinching the tops off promotes new growth as does removing damaged areas of the plant. This can be done by hand, with fingers, or with scissors or pruners.

When flowers fade and turn brown, remove them.

Mulching helps protect the soil and prevents weed growth. It also helps keep certain pests away as well as holding more moisture in the soil.

If you do use mulch on your marigolds, avoid putting it all the way up to the plant’s stems (this can cause rotting).

Marigolds don’t require much fertilizer (if any) as long as they are growing in semi-healthy soil. For that reason, heavily fertilizing them will end up burning them.

If you want to fertilize these flowers, do so lightly with an all-purpose fertilizer, like this organic plant fertilizer.

Marigolds are the type of flowers that need to be pollinated by insects. This is called cross pollination. Sometimes even the wind is enough to pollinate flowers.

If pollen from another kind of flower is introduced to your marigolds from bees you may even end up with a hybrid flower.

Why Won’t My Marigold Seeds Germinate?

If your marigolds aren’t germinating properly, know that the main reason is due to lack of adequate light.

Make sure that your marigold seeds are covered with at least a quarter-inch of soil or growing medium and place them in a bright, protected location, keeping the soil evenly moist until germination occurs.

Marigolds are plants that are generally easy to take care of. A bit of TLC at the end of the season ensure beautiful blooms for as long as possible and the production of viable seeds for new plants next season.

Making sure they get enough light and keeping their soil well hydrated towards the end of the season is crucial. Applying mulch and lightly fertilizing is also advised.