Potatoes may be the last crop that springs to mind when you think about hydroponics, but in truth, it’s more than possible to grow potatoes without dirt (even if most hydroponic gardeners don’t do it often)!

Can potatoes be grown hydroponically? Potatoes may be grown hydroponically without any major issues if approached with care. They require a larger grow bed than other systems, a 6.0 pH level, water temps of approximately 70°F  to 75°F, and 6 to 12 hours of light. Perlite, peat, and vermiculite are preferred growing mediums.

As you read through the following, you’ll discover everything you need to know about hydroponic potatoes!

Most gardeners grow their potatoes outside in the soil; that’s no little-known fact. However, there’s nothing stopping you from growing hydroponic potatoes.

Whether you are space limited in general or simply want to try your hand at hydroponics, enough room for a hydroponic system inside in the corner of a room, balcony, garage, or greenhouse will suffice.

If you don’t have your system outside or in a greenhouse, you’re going to need some grow lights as well (something like this model is ideal). The exception is if you have really great window light.

In the following sections, we discuss the basics of hydroponic potatoes in greater detail.

Can Potatoes Grow Without Soil?

Believe it or not, potatoes grow just fine without soil. The crop still needs water, light, and nutrients, of course.

Hydroponic systems provide all of the above and are perfect alternatives for growing potatoes outside in the dirt.

Every gardening adventure has its share of major advantages and drawbacks. Not surprisingly, this is true of growing potatoes hydroponically.

You’ll have to decide for yourself if the pros outweigh the cons.

The main advantages of growing hydroponic potatoes are a year-round yield, healthier and happier plants in general, and complete control over their environment.

There are also fewer pests, bacteria, and diseases to contend with if you’re going with hydroponic potatoes indoors.

The major cons with growing potatoes hydroponically are that they take more water, space, and light than other crops.

Space is the most significant issue because potatoes are tubers and develop under “the ground” rather than above ground.

Waterborne disease, power outage possibilities, and expensive startup costs are additional disadvantages not to be overlooked.

Which Hydroponic System Is Best for Potatoes?

Potatoes are one of the least likely crops to grow in standard home hydroponic systems because most home systems are mainly geared toward small crops and leafy greens, not large tuber-type vegetables.

That means you need a support system that can hold the weight of the tubers as they grow.

It also means you’ll need much larger and deeper grow beds for your system than most common-sized hydroponic grow sites.

All things considered, DIY systems, hybrid setups, and NFT systems with extra support are the smartest and most efficient hydroponic systems to build/invest in for growing potatoes.

Which Potato Varieties Are Best for Hydroponics?

Beauty is in the eye of the beholder, and so it is with taste in vegetables, including hydroponic potatoes.

A few of the most popular potato varieties for hydroponics are:

That said, whichever species you decide to go with, for your first few batches of hydroponic crops, it’s suggested to start off with sprouting potatoes from a nursery rather than the potatoes sold in grocery stores because they are treated with anti-sprouting agents.

Can You Grow Hydroponic Sweet Potatoes?

Just like with normal potatoes, sweet potatoes can also be grown hydroponically. Granted, you don’t see many home gardeners taking on this challenge (possibly because they are unaware it’s possible!).

Even more, hydroponic sweet potatoes are actually better to grow indoors than normal potatoes because they require even less space in the grow bed.

Can You Grow Potatoes in Aquaponics?

Potatoes can be grown in just about any sort of hydroponic growing system there is, including aquaponic systems.

As long as they have the room in the grow bed and the water, oxygen, and light they need, they will grow.

In an aquaponic system, the fish provide the nutrients, the potato plants provide clean air, and everything is hunky-dory.

For outdoors, aquaponics is an even better choice for growing potatoes.

How Long Do Potatoes Take To Grow Hydroponically?

Depending on the species, environment, and type of growing system you’re working with, hydroponic potatoes may take anywhere from 70 to 90 days or more from planting to harvest.

At any rate, it sure beats 4 to 5 months of waiting for a crop outside in the dirt!

The yield of any given hydroponic potato crop varies depending on the species, how healthy it is, and what sort of system is in use.

The EMBRAPA Research Institution reports that hydroponic potatoes yield up to 1,500% more than their soil counterparts.

Consider the fact that you may grow potatoes all year indoors hydroponically, rather than during only a limited season outside.

The best hydroponic growing medium for potatoes varies, though most hydroponic gardeners suggest a heavy perlite or vermiculite base.

Peat, pebbles, and LECA are also worthy of consideration for your growing medium.

Also, keep in mind that the type of hydroponic system you use may help determine the best medium for your hydroponic potatoes.

Hydroponic potatoes need just as many nutrients indoors as they do when growing outside in the dirt.

Depending on the species of potatoes you want to grow hydroponically, the best nutrient solution may vary.

We suggest a base nutrient solution like MASTERBLEND. That way, if you need/want to tweak the solution, you can do so with careful measuring before the water is added.

Generally speaking, hydroponic potatoes require a good 10 to 12 hours of light per day for optimal growth.

However, as long as they get around 6 to 8 hours they will survive.

Again, depending on the particular species and the power of your grow lights, the amount of light your hydroponic potatoes need could vary slightly.

Hydroponic potatoes need just as much water as other plants, possibly slightly more, but they can not be kept overly moist or the tubers will rot rather than continue to grow.

That’s why NFT and other custom-built hydroponic systems are best for growing potatoes.

The goal is to provide plenty of nutrient-rich water to the roots while not allowing the growing potatoes themselves to become submerged.

The pH level of the water reservoir in your hydroponic growing system should be approximately 6.0 for potatoes.

Temperatures for growing potatoes hydroponically are roughly 65°F to 80°F.

Again, make sure to refer to growing guides/instructions for the specific species with which you are working as each variety differs a bit.

There are several easy-to-spot indicators that your hydroponic potatoes have some sort of nutrient deficiency:

If you notice any of these signs, your best bet is to change out the water and reintroduce the proper amount of nutrients and oxygen into your system.

Can You Grow Hydroponic Potatoes Indoors?

Yes. In fact, growing hydroponic potatoes indoors is preferred by many home gardeners.

Inside, there are practically zero pests and no fluctuating weather to deal with. There is also less soil-borne diseases to worry about.

You just need to make sure they get enough light, oxygen, and nutrients.

Can I Grow Potatoes From Store-Bought Potatoes?

Yes. You can indeed grow potatoes from many store-bought potatoes. However, not all potatoes work due to an anti-sprouting agent that the manufacturer or grocery store uses on them.

How To Grow Hydroponic Potatoes 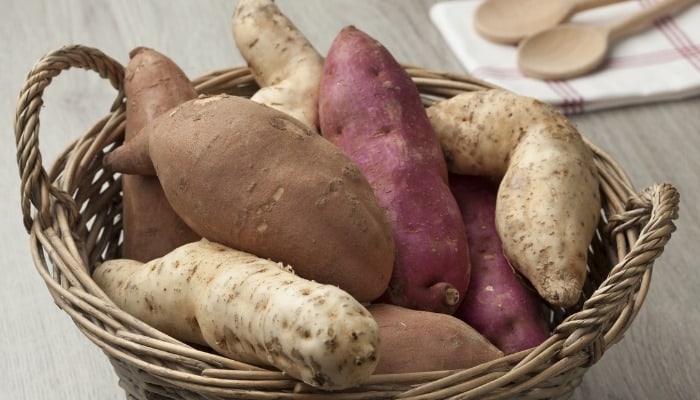 You need a hydroponic system, obviously as well as grow lights, nutrients, and a few other odds and ends like rockwool, LECA, perlite, or another growing medium.

Once you gather the supplies needed, move on to the second step.

2. Setting Up the System and Selecting Growing Medium

The second step is setting up the system you purchased or are building for growing hydroponic potatoes.

You may have already secured your growing medium during step one, but if not, now’s the time to do it.

Potatoes don’t require much in the means of preparation before you plant them.

Simply cut them into sections with at least one eye per section, stick them in a container or brown paper bag, stow them away somewhere dark and dry like a kitchen cabinet, and wait several days for sprouts to appear.

4. Adding the Potatoes to the System

Once your potatoes have sprouts, it’s time to add them into your new hydroponic growing system.

Your system should be on a timer with the lights and water pumps turning on and off at all the right times.

At this point, your biggest job is to monitor the progress of the crop, look for problems, and keep an eye on things like pH levels and water temperatures.

As problems arise, deal with them immediately.

For as long as you’re growing hydroponic potatoes, you need to maintain the system, whether crops are currently growing or in between crops.

When the time to harvest arrives, simply loosen the growing medium, and pull the tubers away from it.

If you’ve used a lightweight medium or inert mediums like LECA and pebbles, removing them takes just a few seconds.

Growing mediums with lots of peat and perlite require a bit more effort.

The biggest issue with growing hydroponic potatoes isn’t algae, pH, or nutrient related; it’s the fact that the tubers themselves are often miniature compared to potatoes grown in soil.

Additionally, power outages, using the wrong type of light, malfunctioning equipment, and failure to properly clean and maintain hydroponic systems are also high on the list of potential problems when producing hydroponic potatoes.

Tips for Success With Hydroponic Potatoes

Hydroponic potatoes aren’t the hardest crop to grow; they are simply larger and require more space.

That said, there are several additional steps you can take to ensure the success of your crop:

All things considered, hydroponic potatoes are more than possible to grow. It makes sense to grow them indoors so they won’t be affected by pests and soil-borne diseases.

Plus, you can grow hydroponic potatoes all year! What’s better than that?