If garden grubs are getting you down, it’s time to learn how to get rid of them in the most effective way possible.

The term “garden grubs” refers to baby insects, also called larvae, in lawns and soil. They typically burrow into the soil and eat the roots of plants as they go.

While garden grubs will help themselves to the roots of any plant they fancy, they are most often seen doing their work in lawn areas.

A telltale sign that you’ve got garden grubs is when your grass starts turning brown and thinning out.

How do I get rid of grubs in my garden? Garden grubs can be controlled or eliminated using natural or chemical methods. Introducing natural predators and beneficial bacteria to the environment or using neem oil and vinegar constitute natural methods of controlling grubs. The best pesticides to use for grubs contain trichlorfon active ingredients.

Getting on top of garden grub deterrent methods is, of course, the best practice. As they say, prevention is better than cure.

Even if your grub problem seems unmanageable, you can get it under control. Read on to learn how to eradicate your garden grub problem.

If you’ve noticed that you have some garden grubs, don’t be dismayed – grubs are a part of nature’s natural organic life cycle.

However, most grubs go unnoticed until they increase in numbers and begin causing damage to your plants or lawn while competing with each other for food.

This is when you will need to take control of the situation and decide how you want to stop them from damaging all of your plants and lawn.

Grubs are worm-like larvae that come from eggs laid by beetles. The eggs hatch in the soil in spring after lying dormant during the winter months.

They immediately burrow into the soil to find a food source; this is usually the roots of your plants or lawn.

There are many garden grubs, but the main culprits are the European chafer, the Oriental beetle, the Japanese Beetle and the Asiatic garden beetle.

They are all uniquely different, but their life cycle is the same, approximately a year from egg to beetle. 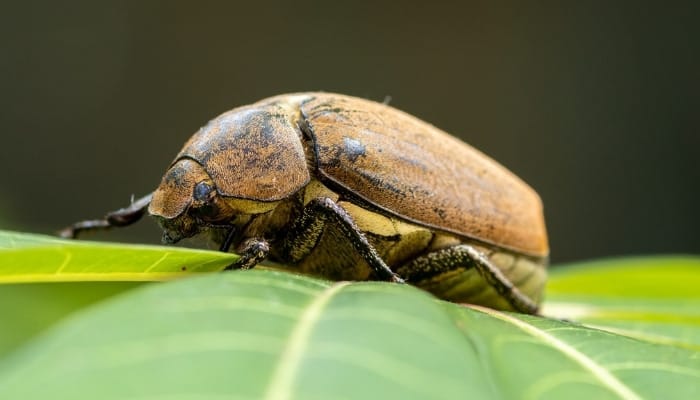 The European chafer is a medium-sized beetle with an oval body; it is usually brown or copper in color. They have a small head and reach about half an inch in size when fully grown.

Adult insects come out at the beginning of summer to mate and lay their eggs back into the soil, laying 20 to 30 eggs over a month. The life span of the European chafer is about one year. 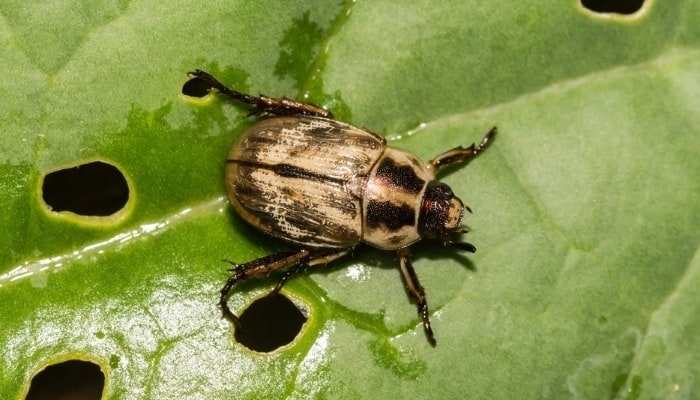 The Oriental beetle is similar to its fellow beetle, the European chafer. It also grows up to half an inch in size and emerges to mate and lay eggs in the summer.

They are gray in color with black splotches. The eggs of the Oriental beetle take about 14 days to hatch, and the larvae start to feed on the grassroots. 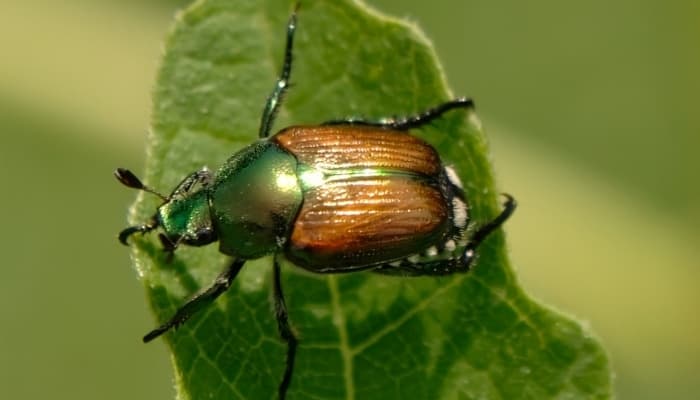 The Japanese beetle is slightly smaller than its counterparts with a metallic-green oval body and copper-colored wings.

They mate after sunset in midsummer with the female laying 20 to 30 eggs. The eggs usually take about 14 days to hatch, and it usually takes about 17 to 25 days for the grubs to molt.

They mature around 18 to 45 days and will feed on roots of grass and plants from the time of hatching. 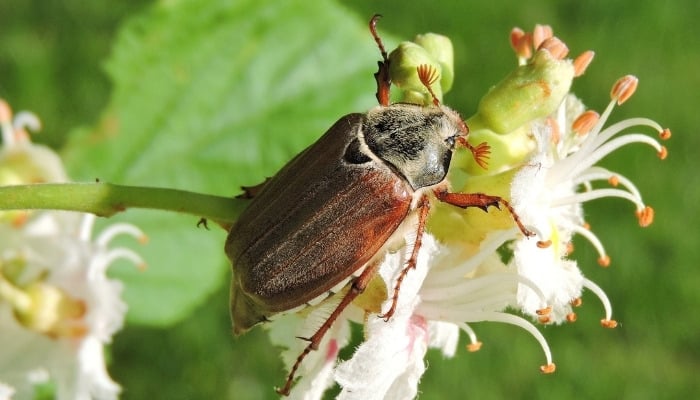 The Asiatic garden beetle is also smaller than the European chafer. A fully mature adult is brown to red in color and is more active at night than during the day.

They mate after dark, and the female will lay her eggs in clusters of 40 or more. The eggs take about 14 days to hatch, and the babies will start to feed as soon as they hatch.

This grub burrows into the soil in the cold winter months and feeds on plant roots for a short time in spring.

Where Do Grubs Come From?

The European chafer, also known as Amphimallon majale, originates from Europe, but they were first discovered in New York in the 1940s. They are now the most common grub species in North America.

The Oriental, the Japanese, and the Asiatic beetles, are all native to Japan. However, the Oriental beetle was found in America in the early 20th century, with its first sighting in Connecticut in the 1920s.

The Japanese beetle found its way to New Jersey in 1916; in 1932, they had spread to Missouri and Illinois. They currently can be found in every state east of Mississippi except for Florida.

The Asiatic beetle was also discovered in New Jersey in 1922 and is commonly found in the Northeastern states of America today.

What Do Grubs Turn Into?

Grubs mature and molt in their second and third stages to eventually pupate. After pupation for approximately one to three weeks, they will molt and then emerge as beetles.

These beetles will mate and lay eggs, hatch into grubs, and the life cycle will start again.

How Do You Know You Have Grubs?

With a lawn, it might be easy to spot if you have grubs.

There will be brown patches of lawn, and if you lift a patch of lawn and find some white worm-like creatures with six legs toward the front of the head, then you have some grubs.

If your plants are performing poorly and then dying without any other sign of disease, then perhaps check the soil around the roots for grubs.

They feed on roots, which is detrimental to the plant’s ability to grow or utilize water.

Do Grubs Hurt Your Garden?

Yes, garden grubs can and will hurt your garden. It is all dependent on how many there are present in your garden and how quickly you act.

A few grubs are easily controlled by nature itself with predators such as voles and birds. However, a large infestation of grubs can and will destroy your lawn and plants in a concise span of time.

When Should I Be Worried About Grubs?

If you start to see thinning lawn and brown patches appearing or your plants start dying without any other factors affecting them, then it’s advised to do a grub check.

Why Are There So Many Grubs in My Garden?

You might be providing the grubs or adult beetles with the perfect situation to breed and multiply.

For example, adult beetles prefer short cut lawns for the female beetles to lay eggs on while grubs thrive in nutrient-rich moist soil – just the type every gardener aims for.

What Are Grubs Good For?

Grubs are great for breaking down organic matter, especially in your compost heap. In addition, while in the grub or beetle stage, their movements within the soil help aerate the soil.

Can I Put Grub Killer in My Garden?

Yes, you can put grub killer in your garden.

In most instances, trichlorfon-based pesticides, beneficial nematodes (believe it or not, you can purchase these directly from Amazon), and milky spore treatments are best for vegetable gardens and lawns.

What Is the Best Time To Treat Grubs?

The optimum time to treat a grub infestation is early spring and late summer; this is when there is increased grub activity in your soil.

For preventative measures, apply treatments before they hatch. For grub-killer products, apply in the spring when you see any signs of lawn or garden damage.

How To Get Rid of Grubs in Garden

Using preventative measures and insecticide products, you can get rid of the majority of the grubs or beetles, but you may still find a few grubs when you are gardening; this is not unusual.

How To Get Rid of Garden Grubs Naturally

You could try natural treatments to deter garden grubs, for instance, nematodes.

These are tiny worms that live in the soil and kill all species of grubs. They are a live product and act as a natural predator of grubs.

Encouraging birds into your garden is a way of introducing a control on the adult beetles when they emerge to mate, but even the grubs in the soil are a good food source for birds.

Making your own natural pest deterrent is also an option. For instance, a mixture of vinegar, sugar, soap, and water sprayed onto the affected area can help deter and even kill grubs.

Another great product is neem oil; treat the garden and lawn to a spray made of 2 tablespoons of neem oil and 2 teaspoons of liquid soap to make a gallon of natural grub repellent.

I prefer to use this organic neem oil, but really any type will do. 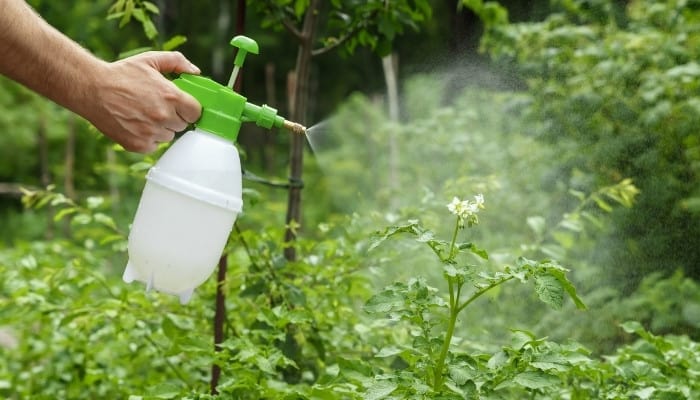 How To Prevent Grubs in Your Garden

To prevent grubs in your garden, fertilize and mulch it often, but water it sparingly so that the roots grow deeper and more robust.

Apply beneficial nematodes annually, and consider adding bird houses and feeders to your yard to attract as many birds as possible.

Timing is at the heart of controlling and eliminating garden grubs. Identifying which grub is causing the damage will play a role in knowing how to prevent an uncontrollable grub infestation.

Use the above information to ensure that you’re able to identify a grub problem and take action as quickly as possible.