Elderberries are a great shrub to grow in your yard. Not only do they produce a highly sought-after fruit, but they also grow easily and don’t need much care to manage.

They do spread aggressively, though, so it’s important to make sure they’re not spreading into areas you don’t want them growing.

Does elderberry spread? Elderberry is an aggressive spreader, which could be a strong benefit. Commonly used as a hedge, a small elderberry plant can grow into a thick hedge in roughly three years. As long as they are managed well, elderberries can be a great addition to your garden.

Elderberries spread in a mostly predictable manner, and if you keep your attention on them, the spread can be managed or controlled relatively easily.

First, it’s important to explain what “invasive” means. An invasive plant is one that spreads outside its natural habitat. It’s “invading” another habitat.

Elderberry spreads through offshoots from its root system known as suckers.

These suckers grow into elderberry plants themselves and then spread, creating an exponential system over time that can be difficult to control.

Elderberry tree roots spread rapidly and aggressively, but they will not grow through most barriers. Their roots will primarily spread to areas that are not occupied.

The best way to keep an elderberry bush from spreading is to place it in a pot. If that’s not possible, underground barriers will help to prevent it from spreading.

How Long Does It Take Elderberry To Spread?

Elderberry can spread rapidly. Depending on the growing conditions, the plant can spread underground 7-10 feet per year.

Its roots are shallow, so this is easily managed by removing roots or blocking their path.

How Big Do Elderberry Bushes Get?

Elderberry bushes can grow up to 6-12 feet tall. Due to the way they spread, elderberry tends to grow as a dense hedge full of newly formed shoots. 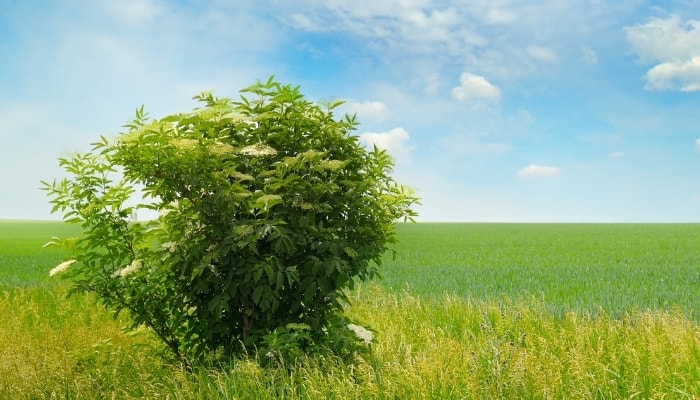 How Fast Do Elderberry Bushes Grow?

It takes elderberries roughly three years to reach their full grown size of 6-12 feet. Elderberry is classified as a moderate growth rate plant.

Since elderberries do spread strongly and rapidly, it’s best to plant them 6-8 feet apart. This will give the elderberry room to spread without feeling excessively contained.

How To Stop Elderberry From Spreading

The best way to stop elderberry from spreading is to plant it in a pot. If you prefer to plant it in the ground, its spread can either be prevented or controlled.

A barrier is the best way to prevent spreading. Ideally, the barrier should be something without air gaps, like a plastic wall or concrete.

Spreading can also be managed by trimming away any suckers that you notice, though this is the most labor-intensive process.

How To Capitalize on Elderberry Spreading

Since elderberry is such a healthy grower, it’s a great opportunity to propagate the plant.

Any additional shoots that are produced by the plant don’t need to be cut down or destroyed; they can be dug up for various uses.

Volunteer shoots can be transplanted to another area. This makes elderberries extremely cost effective.

If you have the time to spare, growing several hedges of elderberry can be done by only purchasing one plant.

Once the suckers begin to show from the first plant, they can be removed and planted elsewhere to create several elderberry hedges.

If you’ve placed all the elderberry you have room for, you can always give shoots away to friends or sell them. This changes elderberry from being a cost-effective plant to a potentially lucrative one.

With little effort on your part, the plant can be made into a small income source. With elderberry treatments rising in popularity, this method is sure to be well received.

Elderberry grows well in pots, but because of its aggressive growth, it needs a slightly larger than normal pot (roughly 24 inches wide by 20 inches deep).

To plant elderberry in a pot:

Where Should I Plant Elderberry?

Elderberry should be planted in an area that receives full to partial sun.

There’s no need to worry about its aggressive root system breaking into sewer or septic lines, but it could grow into the habitat of other plants, so take care to plant it far from plants that you don’t want competing with your elderberry.

Can I Plant Elderberry in the Fall?

Make sure to plant them 6-8 weeks before the first frost so they can establish a root system before freezing temperatures arrive.

Planting them too late in the year could cause your elderberries to die over the winter.

While elderberries are aggressive spreaders, this could be seen as an advantage.

The plant will grow from a small bush into a large, dense hedge in under three years, making this a very cost-effective and attractive plant.