When you taste a delicious elderberry preserve or a refreshing fruit juice infused with elderberry, you could be sampling the fruit of either an American elder species or one from across the pond.

Both are very closely related to one another, so how do you tell them apart?

There’s a lot to love about both versions of elderberry, and they both carry some awesome health benefits!

Let’s look at the two species of elderberry in greater detail. We’ve also included a round-up of popular varieties to grow and poisonous elderberry clones to watch out for. 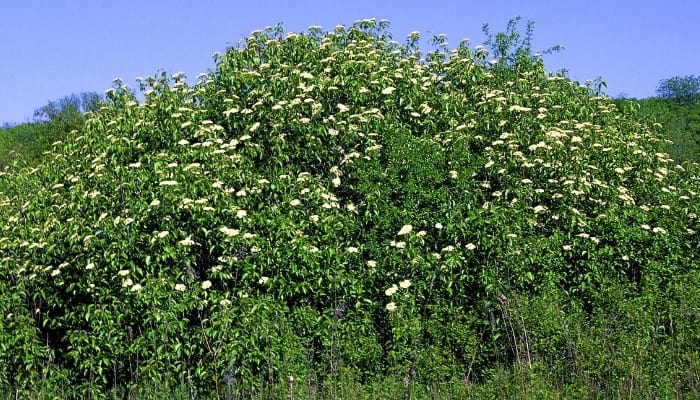 Also known as the “Wild American Elderberry,” this plant (Sambucus canadensis) is native to North and Central America, and its branches were once used by Native Americans to craft pan pipes and flutes.

American Elderberry at a Glance

This plant typically grows between 6 and 12 feet tall with a 6-foot spread at maturity (though it’s not unheard of for some varieties to reach up to 10 feet or more across).

American elders are woody shrubs with an arching, spreading habit with green stems that develop brown bark and tiny furrows after the first year.

The leaves are lance shaped and light green with saw-toothed edges and slightly prominent veins — each grows to about 5 to 9 inches in length and turns red in the fall.

From spring to midsummer in its second year (typically around April to July), American elderberry plants produce dense clusters of tiny flat-topped blooms in a pale cream color.

Each cluster can span between 4 and 12 inches across, and each flower has five rounded petals and measures just under an inch in total.

This plant is hardy to USDA Hardiness Zones 3 through to 8 and is normally found in moist forest areas and along streams and marshes, so it prefers to grow in full or partial shade in rich, moist soil.

Though elderberries produce a small crop in the first year, Amy Grant of Gardening Know How advises waiting until the second season for the most productive harvest.

“Elderberries attain their full height in the first season, but lateral branches develop in the second year, making second-year elderberry canes the most fruitful.”

Depending on your region and elder variety, mid-August to mid-September is the best time for harvesting elderberry fruit!

By late summer/early fall, blooms are followed by large drooping clusters of deep purple-black drupes (elderberries), each one around 1/4 inch (6mm) in diameter.

The berry-like fruit contains approximately 3-5 seeds within and has a tart, tangy taste when ripe but is considered sweeter than European elderberries.

The flowers and fruit are often used in winemaking too.

As for its medicinal qualities, American elderberry is packed with vitamin C, A, and B6 and is thought to improve digestion and strengthen the immune system.

A study also found elderberry to have a much higher antioxidant potential than even blueberries or cranberries! 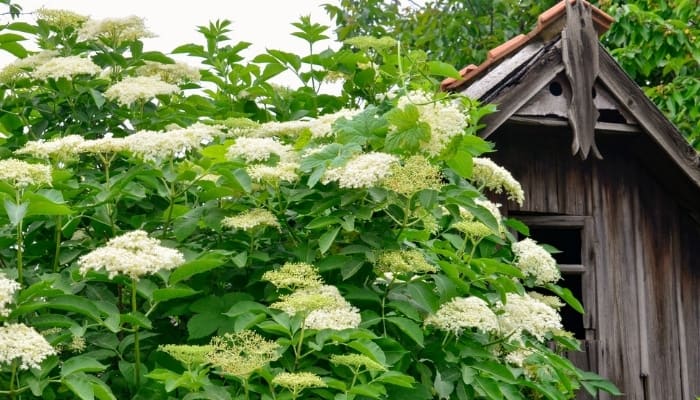 The European, or common elderberry (Sambucus nigra), is native to Europe and has since migrated to eastern North America.

Its use dates back to 400 BC, and the Greek physician Hippocrates dubbed the elder tree his “medicine chest.”

European Elderberry at a Glance

The European elderberry shrub is close to the size of a small tree, typically reaching 6 meters (20 feet) tall and wide, but some varieties may grow up to 9 meters (almost 30 feet) high.

Its bark turns from gray to brown with age and features furrows and bumps along the length.

The elliptical/lance-shaped leaves are bright green with serrated edges and measure around 2 to 6 inches long each.

Common elder plants usually bloom between June and July but can flower as early as May depending on the weather and region.

European elderberry flowers are tiny (1/8 of an inch or less) and yellowish white with flat to saucer-shaped forms and come in clusters/sprays spanning about 6 to 8 inches across.

European elderberry is hardy in USDA Grow Zones 5 to 7 (or UK Zone 5).

It is typically found among large hedgerows, by road banks, and along footpaths and favors a disturbed base with nitrogen-rich soil.

Common elders are ripe and ready to be harvested by late September into early October, but take care to only harvest once all the berries have ripened (dark-purple to black and soft) as eating unripe (hard and green) elderberries can cause stomach upset.

Each elderberry measures 3 to 5 millimeters in diameter and is glossy with a deep purple, almost black color. The elderberries hang from a drooping cluster.

European elderberry fruits are slightly bitter when raw but sweet and juicy when cooked/processed.

Common elderberry fruit is used in the making of various jellies, preserves, pies, and desserts and is added to sauces and chutneys.

European elderberry has also played a role in medicine for centuries, being used in many health supplements, extracts, throat lozenges, and cough syrups.

Like American elder, it’s rich in vitamins and an excellent source of anthocyanins and flavonoids, which have anti-inflammatory, immune-boosting properties.

Elderberry plants are a versatile bunch with cultivars boasting different sizes, flowers, and berry colors. Here are a few of the most popular varieties out there:

There are three main elderberry doppelgangers you definitely need to be wary of when you’re out foraging! 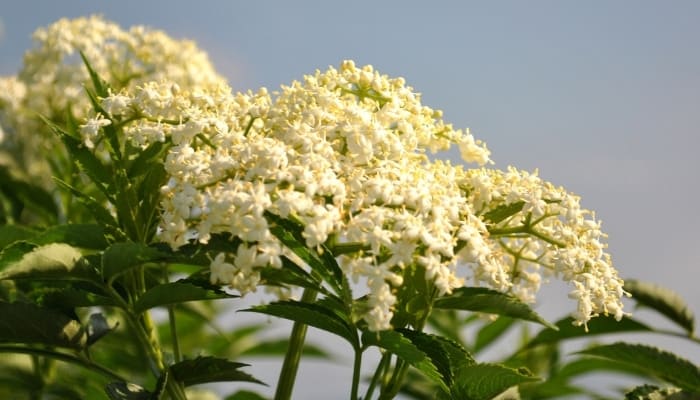 While elderberry leaves branch off in opposite/parallel pairs on the stem, water hemlock leaves grow in an alternating pattern and are more triangular than elderberry’s more elliptical/lance-shaped leaves.

Also, the stems and stalks of the hemlock have reddish-purple streaks, the flower clusters are spaced wider apart, and the fruits produced are not dark berries but small green fruits with a ribbed texture. 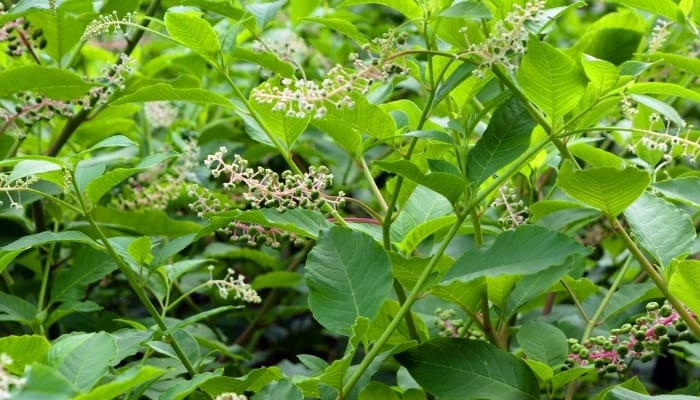 Instead of the wide-spreading and dense berry clusters found on elderberry, pokeweed plants produce larger berries that jut out on prominent individual stalks contained on a pendulous cylinder cluster.

Pokeweed leaves are also a duller green and have smooth edges (no saw-tooth serration). 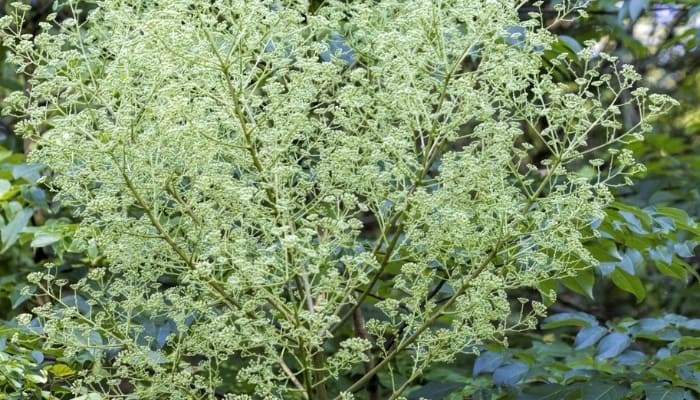 Unlike the smooth and fairly slender main stalks of elderberry plants, the devil’s walking stick has a thicker burgundy/brown central stalk covered in small thorns and spines.

The berries are also nearer to black than dark purple and come in smaller fruit clusters. Thirdly, the leaves are slightly broader (sometimes heart-shaped) compared to elongated elder leaves.

How Fast Do Elderberry Bushes Grow?

Elderberry bushes can grow relatively fast, spreading between 6 and 12 feet a couple of years after being planted.

What Is the Best Elderberry Plant for Medicine?

However, some herbalists believe the ‘Haschberg’ European variety is the better medicinal plant.

To sum up, European elderberry shrubs tend to be much larger, bloom later, and thrive in fewer regions compared to its close cousin, the American elderberry variety.

Aside from this though, both elderberry types are very similar in their appearance, culinary uses, and their health benefits!

Just be wary when exploring preferred elderberry habitats as toxic lookalikes can grow in similar spots – always look for subtle differences in the appearance of their leaves, stems, and fruit when you can.