Aquaponics and hydroponics are both water-based growing techniques. Soil isn’t needed for either method.

That said, these two growing methods have several differences that make each of them stand out from the other.

Aquaponics relies on fish to produce food for plants and to filter and clean the water in reservoirs. In addition, aquaponic tanks are typically larger and round (whereas hydroponic tanks are smaller and usually rectangular). But, once established aquaponics takes less monitoring than hydroponics.

In this article, we break down, compare, and discuss everything there is to know about aquaponics and hydroponics.

Key Differences Between Aquaponics and Hydroponics

Below, we discuss both of these aquatic growing methods in great detail, including the basics of each one plus pros, cons, similarities, and differences.

The Basics of Aquaponics 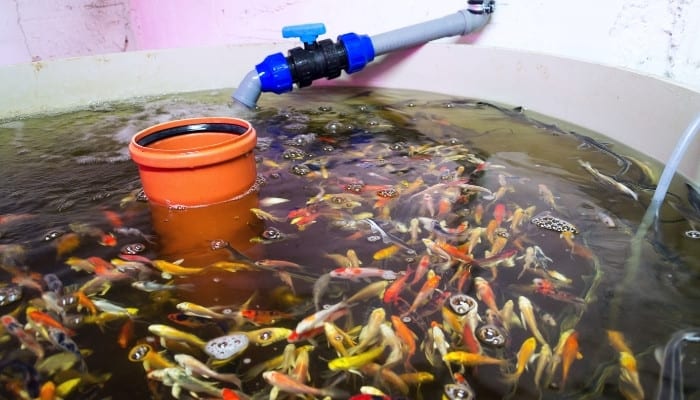 Aquaponics is a growing technique that revolves around five basic factors:

The Basics of Hydroponics 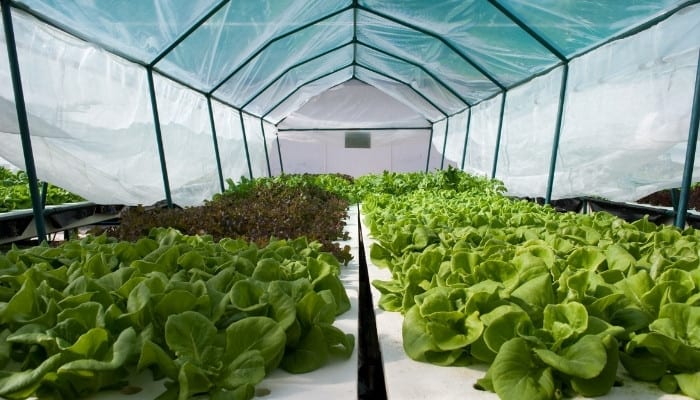 To put it simply; hydroponics is a form of growing plants that hinges around delivering nutrients, through water, to plants rather than growing them in soil.

There are six main types of hydroponics, but all of them include the following basics:

How Are Aquaponics and Hydroponics Alike?

Both growing systems come in various sizes, ranging from small setups just large enough for a handful of plants to commercial systems with the capability to grow hundreds (or even thousands) of plants.

One of the main factors that make hydroponics and aquaponics similar is that they are both soilless growing systems. They both utilize water, nutrients, and some sort of artificial growing foundation.

Both methods rely on water, and pumps, to deliver nutrients and oxygen to grow sites located separately from the reservoir/fish tank.

You can set up and operate aquaponic and hydroponic systems either indoors or outdoors. If operating Indoors, lights are necessary with both types of these growing systems.

Wide-variety of designs and sizes

There is an enormous amount of different sorts of hydroponics and aquaponics techniques and system designs. Likewise, both types of systems are found in all sizes imaginable.

Key Differences Between Aquaponics and Hydroponics

There are more differences between aquaponics and hydroponics than there are similarities, believe it or not. Below, we break down the differences and have a much closer look.

Hydroponics is typically more affordable to get started with than aquaponics. The main reasons being that there are no fish to buy, the systems have smaller tanks, and less power is used by components while operating.

A basic hydroponics system costs between $100 and $1,000 depending on the type and size. Aquaponics on the other hand is rarely doable for under $1,000. More often, aquaponics may cost upwards of a few thousand dollars to get started with.

Aquaponic growing systems are often considered easier to use than hydroponics. That is mainly because of the fact that they require less monitoring while in operation.

In addition, the water is much easier to dispose of when switching out fluids and cleaning the reservoir.

Hydroponic systems on the other hand are much easier to set up and control. There are no fish to care for and no bacteria to measure with hydro systems.

Both aquaponics and hydroponics require a decent amount of maintenance. To begin with, both need their reservoirs cleaned and water changed regularly.

Further, both systems need their components monitored, cleaned, and repaired, or replaced as needed.

Aquaponics may require a bit more maintenance than hydroponics due to the addition of fish and bacteria in comparison.

A couple of the main factors that go into this difference are:

The only real difference in productivity between aquaponics and hydroponics is in their size and orientation. Both systems are capable of high yields, in little time, with less effort than traditional growing methods.

Therefore, the level of productivity depends more on whether or not it is a small system for personal use or a commercial system, rather than if it is aquaponics or hydroponics.

The nutrients needed by aquaponic and hydroponic systems have very little difference.

Aquaponics requires a pH level with a very narrow window for mistakes; 6.8 to 7.0. Hydroponics, on the other hand, works with a bit wider of a range; 5.5 to 6.0.

One tweak too much, or lacking to tweak at all, may result in sick fish, dead plants, or complete system failure.

Both types of growing systems come with a serious learning curve. That said, due to issues with fish, managing levels of beneficial bacteria, and other small differences between the two, aquaponics may have a slightly steeper learning curve involved with it.

Which Is Better – Aquaponics or Hydroponics?

There is no obvious winner to the “aquaponics vs hydroponics” debate. Rather, the answer depends on intents and purposes.

For those who have plenty of room, and money to invest, aquaponics may be the better choice. Aquaponic systems are somewhat more simplistic once installed and running compared to hydroponics.

Hydroponics, however, are typically easier to install, take up less space, and don’t have as high of a learning curve. They are also a great choice for personal use and urban gardening.

Is Aquaponics Easier Than Hydroponics?

There may be a common misconception that aquaponics is far easier than hydroponics. The truth is, while aquaponics does have some aspects that are less time-consuming or complex, it also has factors that are significantly more delicate than many aspects of hydroponics.

For example, growing and caring for fish in order to run your growing system is more of an investment of your time and money than simply setting up a hydroponics system.

In addition, using the correct variety of fish, in a properly sized tank, to grow specific sorts of crops could get a bit tricky.

Can Both Aquaponics and Hydroponics Be Done Indoors?

One of the most convenient aspects of both aquaponics and hydroponics is that they both can be done indoors. The biggest difference between outdoor and indoor operations, of course, is the addition of grow lights rather than harvesting energy from the sun.

That said, the electricity consumed by indoor growing operations, of either sort, is most definitely higher than outdoors. For that reason, it’s common to see backyard aquaponics and hydroponics setups.

What Fish Are Used in Aquaponic Gardening?

A wide variety of fish are suitable for aquaponic gardening. Some species are more beneficial than others. Also, specific species may be even more beneficial for certain types of crops.

One of the most popular fish to use in aquaponic gardens is Tilapia. This fish species is probably the most resistant to parasites, pathogens, and stress caused by the environment. In other words, Tilapia is the most adaptive fish for aquaponics and will survive minor issues that will kill or weaken others.

Other fish commonly used in aquaponics include:

Best Plants To Grow With Aquaponics

There is a wide variety of plants that are growable via aquaponics. The best plants to grow with aquaponics include:

Best Plants To Grow With Hydroponics

Hydroponics has an advantage over aquaponics when it comes to the number of plant species that are growable. Some of the best plants to grow with hydroponics include:

Considerations When Deciding Between Aquaponics and Hydroponics

Before jumping to conclusions about whether aquaponics or hydroponics better suits your needs, have a look at the following considerations:

Both types of these growing systems can be done on a budget. Likewise, larger systems of either sort can be quite expensive.

The bottom line here is that aquaponics tends to require a bit more of an initial investment due to the fish, fish food, larger tanks, and other little things that add up.

The amount of space you have available for setting up and operating a growing system is a big factor to consider before making an investment in either one.

If you live in the city, hydroponics may make more sense. Hydroponic systems are stackable and can take up much less space than aquaponics.

For those who already have large gardens, or have access to large indoor facilities, aquaponics may be much more feasible.

The level of ease at which a growing system is usable to you makes a huge difference. If you’re new to either sort of growing system there is a learning curve involved.

Once you have passed the first phases of learning, the system you choose should be one that is easy and comfortable for you to operate.

The amount of time and energy that’s required to set up and run either one of these growing systems varies.

Depending on the size of it, what type it is, and whether it’s for personal use or commercial purposes are a few of the most significant factors that impact how much time and energy is needed.

Vegetables grown in aquaponic systems are just as healthy as vegetables grown by hydroponics or in the soil. In fact, they may be considered completely organic.

That said, due to their reliance on fish, they may need to be cleaned extra well in some cases.

Are Aquaponic Fish Safe To Eat?

Fish used in aquaponics systems are absolutely edible due to the organic nature of the system. But, not all fish species are good for eating, such as tetra and goldfish.

A Final Word About Aquaponics and Hydroponics

Aquaponics and hydroponics share many similarities and differences. Both types of systems are great choices for those who don’t have the means, space, or desire to grow crops in the soil.

Further, both of these aquatic-based growing methods can be as organic and chemical-free as any outdoor organic garden.

Hopefully, with all of the above information, your decision between aquaponics and hydroponics is now the most well-informed one possible.