We’ve all seen them growing in our yard or somewhere around town.

They look just like a nasty old mushroom from a fairytale book, often depicted growing nearby a witch’s cottage in the woods.

Stinkhorn mushrooms are worldwide fungi but aren’t really fun guys at all. They pop up, seemingly out of nowhere and disappear almost as quickly.

These mushrooms come by their name honestly, because they genuinely do stink to the high heavens.

They can also drop millions upon millions of fresh spores to spawn an endless count of their brethren.

Are stinkhorn mushrooms poisonous? The general consensus is that stinkhorn mushrooms are not poisonous. In fact, in Europe and Asia, stinkhorns are found on the menu of edible mushrooms. That, however, doesn’t mean that they should all be eaten as some may cause gastric distress or stomach upset.

Read on below to find out more about the infamous stinkhorn mushroom, everything from how it grows and where it grows to how to get rid of it and more!

Stinkhorn Mushrooms – What You Need To Know

Stinkhorn mushrooms, for the most part, are not harmful to people, pets, or plants. On the contrary, they are quite beneficial to gardens and may even be eaten as a delicacy.

That said, these mushrooms have the name stinkhorn for good reason; they have an incredibly horrible aroma.

If you’re unfortunate enough to witness these ugly little guys, you’ve no doubt already suffered a whiff or two of their stink.

What Are Stinkhorn Mushrooms?

The stinkhorn mushroom belongs to the order of Phallales, within the Phallaceae fungi family.

These stinky horn-shaped shrooms grow all over the world but show up even more often in humid parts of the globe such as tropical regions.

Aside from being shaped like a horn, with a slimy old witch’s hat sitting on top, their appearance typically includes an entourage of insects drawn to the mushroom’s rotting stench.

The smell itself is sometimes noticeable before the mushroom has even been spotted. You’ll be able to recognize it quickly, as it smells uncannily like rotting meat or dung.

There are over 21 types and 77 subspecies of stinkhorn mushrooms that are currently known to man. So, appearances may vary greatly.

Most of the stinkhorns are not poisonous. They’re just ugly and smell bad, for the most part.

(Be sure to check out our article on 24 common toxic mushrooms so you’ll know what to avoid.)

Incredibly these stinky shrooms grow at rates of up to 6 inches per hour and have the strength to break through even compacted earth and asphalt.

Are Stinkhorn Mushrooms Poisonous to Dogs?

Most stinkhorn mushrooms are safe for dogs to eat, even though eating them is probably the last thing on your dog’s mind once they get a sniff of the foul-smelling mushroom.

It is important to note, however, that some dog owners have reported stinkhorns making their dogs sick.

If you’re concerned about a mushroom your dog may have eaten, the Facebook page Poisons Help; Emergency Identification For Mushrooms & Plants is an excellent place to turn.

In emergency situations, they have experts to help identify mushrooms and tell if they are indeed a cause for concern.

What Are Stinkhorn Eggs? 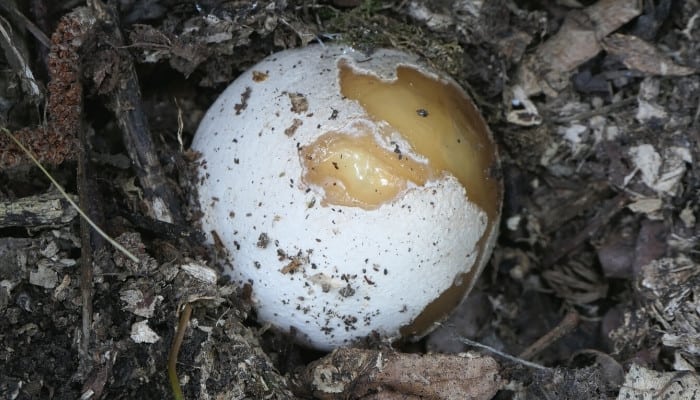 Stinkhorn eggs are, more or less, baby stinkhorns that are about to sprout. Technically known as a “volva,” these immature fruiting mushroom bodies look very similar to eggs.

Within hours of appearing, the mature fruiting body (the mushroom) rapidly appears from out of the egg.

As the mushroom grows out of the egg, it is covered in a stinky slimy mass.

The stinkhorn mushroom is edible and is eaten in various regions of the world. That said, it is mainly only considered edible during the egg stage.

It is reported to taste similar to a root vegetable, like radish.

Stinkhorn mushrooms have been sold in markets and eaten in Europe and Asia for centuries. They were also used as medicine for gout, rheumatism, and other issues.

As mentioned above, there are at least 21 types of stinkhorn mushrooms and 77 or more individual species.

For classification purposes, most stinkhorns belong to one of two groups: single-stemmed (Phallaceae) or multi-stemmed (Clathraceae).

Clathrus stinkhorn is another strange-looking Clethraceae and is generally suspected to be toxic to people and pets.

Where Stinkhorn Mushrooms Can Be Found

Stinkhorn mushrooms exist all over the world.

Even though the textbooks may suggest that they prefer tropical regions, they are far more widespread than just strictly appearing in humid environments.

In fact, no matter what country you live in, you may encounter stinkhorns, even in your own yard.

Speaking of your own yard, look for stinkhorns in and around the garden as well as flower beds that contain mulch or wood chips. They may also grow near wood piles or tree lines.

Technically speaking, the mushroom grows on decomposing matter, like organic materials from kitchen scraps or rotting grass, leaves, and wood.

Are mushrooms necessarily bad for your garden? You’ll find the answer here.

Stinkhorn mushrooms spread like most of their cousins in the mushroom kingdom – by dropping spores all over the place.

Stinkhorns, however, have an easier job of replicating than many mushrooms as their obnoxious smell attracts flies and other insects to them.

When the insects land on the stinkhorns, they kick up spores and carry them away to be distributed elsewhere.

For every coin, there are two sides. As ugly and stinky as they are, stinkhorns are also beneficial in a couple of ways.

The first major benefit of stinkhorns is that they help recycle dead organic material into nutrients or fertilizer.

That means they’re incredibly beneficial in the garden or compost pile.

The second significant benefit of stinkhorns is the fact that as “eggs” they are edible and even seen as a delicacy by some cultures.

Thankfully, stinkhorns don’t stink around for long. At best, most stinkhorns last around a day or so before dying.

Some slow-growing species may last for several days, stinking the place up and attracting flies.

How To Get Rid of Stinkhorn Mushrooms 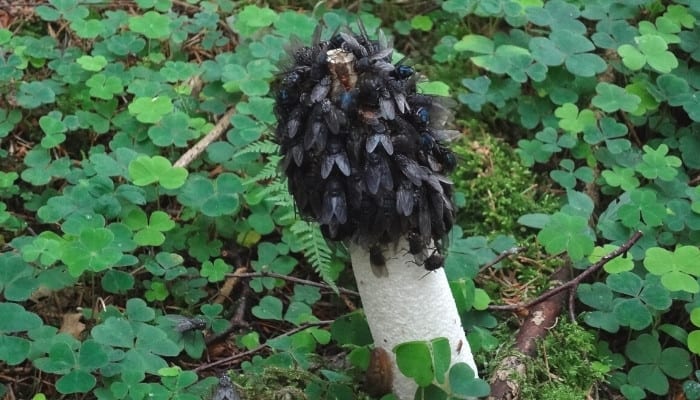 There are a few methods to choose from when it comes to getting rid of stinkhorn mushrooms.

However, it is important to note that these methods may not have the same impact on all stinkhorn species and more than likely have little to no effect on spores.

The most popular ways to get rid of stinkhorns include:

Keep in mind that fungicides and lime may help temporarily, but they don’t kill mushrooms.

Nitrogen-heavy fertilizers and compost are excellent materials to add to flower beds and gardens to prevent stinkhorns from growing.

You can kill stinkhorn mushrooms by pouring good old table salt on them. Please note that this won’t affect the spores, so new mushrooms may still appear after the salt is applied.

Salt is also a good way to get rid of other common garden weeds like trumpet vines and dandelions.

Though most agree that stinkhorns are not poisonous mushrooms, it’s probably best not to consume mushrooms in the wild unless you are a well-trained mycologist.