Chilaca pepper is a cornerstone of Mexican cuisine. Curvy and dark green, the pepper is consumed mostly in its dried form.

Its rich flavor is unmistakable and can sometimes be overpowering when added to salsas, homemade sausages, and stir-fries, but unlike other Mexican peppers, chilaca pepper will not burn your mouth.

How spicy are chilaca peppers? Chilaca peppers are mildly spicy with an average score of 1,000 to 1,500 on the Scoville spiciness scale. Fresh chilaca peppers are even milder than dried ones. When dried, chicala pepper is called chile negro, and it goes into sauces, sausages, seasonings, stir-fries, and pickles.

Chilaca peppers are gaining popularity in the United States both as a must-have pepper in your pantry and a great addition to your garden.

Continue reading to find out how to grow and use chilaca peppers.

Chilaca Peppers at a Glance

Although not as hot or famous as jalapenos, chilaca peppers are gaining a more prominent spot in the kitchen thanks to their rich flavors.

Chilaca is a word in the Nahuatl Acatl language that means gray hair. It’s a fitting name for the small and dark-green pods with their wrinkled skin that turns dark brown when dried.

It has lush green leaves. The pepper pods are green and then turn red before finally settling in dark shades of brown when fully ripe. The skin is usually wrinkled.

The average size of the plant is 30 inches tall. The pods will grow between 9 to 11 inches long and 1 inch wide.

The pods are often flattened and look old even when they’re still growing on the plant.

Chilaca pepper scores between 1,000 to 2,500 on the Scoville scale. This is relatively mild for a Mexican pepper.

When compared to jalapeno, which scores 5,000 Scoville units, chilaca is considered mildly hot.

Chilaca pepper has a unique and rich, berry-like flavor. Since it’s mildly hot, you can add more of the dried pepper to your dishes to get the most out of the flavors without making the dish too spicy.

Fresh chilaca pepper goes into salsa mostly, but it’s the dried pepper that is used in different Mexican sauces, including enchilada sauces and mole sauces.

You can also add it to salsa, hot sauce, sauce additions, homemade sausage, and chili.

It adds a unique flavor to meat and veggie dishes as well as being tasty in stir-fry and pickling and when grilled or roasted.

When ground, the dried pepper is used as a condiment and in table sauces.

Like many other hot peppers, you can use chilaca to repel deer in the garden as well as spray it on plants to repel pests.

However, since it’s not that spicy, its effect as a homemade pest repellent is not that impressive.

If you have grown any other pepper plant in your garden, you won’t find that growing chilaca peppers are any different.

The plants are not cold tolerant, so you should start the seeds indoors before the last frost, then transplant them in the garden when the weather has warmed up and the soil become workable.

Choose a spot in your garden that gets between 6 and 8 hours of full sun every day during the spring and summer.

A west- or south-facing spot would be good as it allows the pepper plants to get the most of the afternoon sun and ripen fast.

Avoid drafty areas that get strong winds that could damage the young plants and break the thin stems.

In Zones 9 to 11, you can grow chilaca pepper as a perennial where it will continue to fruit for a few years. In colder zones, it grows as an annual.

Space the plants 18 to 36 inches apart to improve ventilation between the pepper plants and avoid diseases and fungal infections.

Aphids are the common pests that attack the plant. Spray them with neem oil (I use this organic neem) when you detect the pesky pests.

When To Pick Chilaca Peppers

Chilaca peppers start to turn red around 60 days after planting the seeds. The more time you give them, the more mature the pods get.

After about 85 days, the pods will turn dark green or brown. You can pick the ripe peppers and consume them fresh. 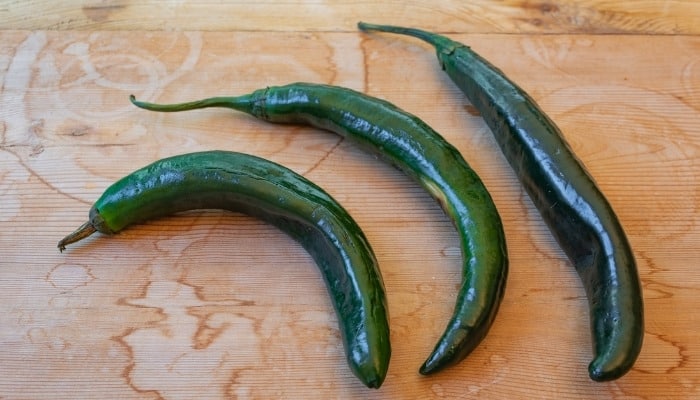 Are Chilaca Peppers the Same as Pasilla?

Is a Chilaca Pepper the Same as a Poblano?

Although they have many similarities in terms of the taste and flavor of the pods and how they ripen into brown color, the two peppers are quite different.

Poblano is a dark-green and heart-shaped pepper that turns brown or dark red when ripe. Chilaca pepper is dark green, thin, and flat with wrinkled skin. It turns brown when ripe.

Both poblano and chilaca pepper are Mexican peppers that start as dark green then turn brown when ripe, but while chilaca pepper is thin and wrinkled, poblano is thicker, heart shaped, and smooth.

Poblano peppers look more like bell peppers compared to the thin and long chilaca pepper. In terms of spiciness, poblano peppers average between 1,000 to 1,500 Scoville units.

They’re milder than chilaca peppers that average 1,000 to 2,500 on the Scoville scale.

When dried, both peppers have the same taste and flavors. You can use poblano pepper as a replacement for chilaca pepper, especially when you want the flavors but not the spiciness of the pepper.

Is a Chilaca Pepper Hot?

Chilaca pepper is mildly hot. It scores between 1,000 to 2,500 units on the Scoville scale. They are somewhere in the middle between poblano and jalapeno peppers.

If you’re looking for a spicy pepper, then jalapeno should be your first choice. Chilaca peppers are favored for their pleasant flavors rather than their spiciness.

Poblano offers the rich flavors of chilaca pepper without the spiciness.

Once the chilaca peppers reach between 6 and 9 inches long, they start to ripen. The curvy pods are dark green at first, but then turn red as they mature.

The fully ripe peppers are brown with wrinkled skin. The longer they stay on the plant, the darker, spicier, and more wrinkled they get.

How To Dry Chilaca Peppers

The best way to dry chilaca peppers at home is to let the sun and fresh air suck out the moisture in the pods slowly and naturally.

This method preserves the pleasant and rich flavors of the pods. Tie the stems of the ripe peppers to a string at 1 to 2-inch intervals.

Spacing the peppers is important for ventilation and to prevent mold growth.

Hang the strings of peppers in a dry, sunny, and well-ventilated area. Check on them regularly to make sure they’re drying well. In about 3 weeks, the peppers will be crisp dry and ready to use.

What Are Chilaca Peppers Good For?

You can put chilaca peppers to good use around the house. In the kitchen, dried chilaca peppers go into different sauces to give them a pleasant and berry-like rich flavor.

Whether you’re roasting, grilling, or pickling, you can rely on the peppers to infuse the dish with rich flavors.

I also recommend using chilaca peppers in salsa, hot sauce, sauce additions, homemade sausage, and stir-fries. Keep in mind that fresh chilaca peppers are much milder than the dried ones.

Apart from food, chilaca peppers are used to make pest and deer repellent to protect your garden plants.

Where To Buy Chilaca Peppers

Chilaca peppers are getting more and more popular in the United States. If you live in the West or Southwest regions of the country, you can easily find the dried peppers in every supermarket.

Make sure that the label reads “pasilla” or “chilaca peppers.” Anchos and ancho pasillas are dried poblano peppers, which are not as spicy as chilaca peppers.

You can also buy the dried peppers online here.

Chilaca peppers are mild peppers with rich and pleasant flavors. They grow in the same conditions as other pepper plants with perennial hardiness to Zones 9 to 11.

Use the dried peppers in sauces, pickling, seasoning, and stir-fries.