This wild, colorful fungus found on the trunks and fallen wood of decaying oak trunks may not look or sound particularly appetizing, but its sinewy white flesh and orange-yellow surface are said to resemble cooked chicken breast, hence the name.

But can you actually eat this mushroom?

Is chicken of the woods edible? Chicken of the woods is a perfectly edible fungus when harvested from a deciduous tree and picked when the flesh is brightly colored and sports a tender, velvety texture as this signifies a young, fresh mushroom. It must then be thoroughly washed and cooked to prevent stomach issues.

This flavorful fungi often makes a well-loved and versatile meat substitute in many vegetarian dishes from soups to fried ‘chicken’ strips.

From safely identifying the true fungi from the frauds to preparing it at home, we’ve got the low-down on chicken of the woods from mushroom experts to help you forage with confidence!

Chicken of the Woods at a Glance

It was later transferred to the Laetiporous genus of fungi to reflect its “abundant” and “porous” appearance.

Due to its anti-inflammatory and anticarcinogenic properties, it has long been used as a medicinal mushroom in traditional European cultures and even by the people of southwest Ethiopia today.

Chicken of the Woods Identification

Chicken of the woods can be identified by its wavy fan-shaped brackets spanning 20 inches or more across.

You’ll typically find several of these brackets stacked on top of each other – giving the mushroom its alternate name “sulphur shelf.”

The caps have a velvety surface and range in color from striking bright yellow and orange to pale pink with sulfur-yellow margins.

Is Chicken of the Woods Yellow Underneath?

The underside is covered in thousands of microscopic white pores instead of the gills (paper-thin structures) found underneath common wild fungi.

Can Chicken of the Woods Be White?

Chicken of the woods’ caps turn pale with age and will have a beige or white hue. White caps are still edible but have an acrid taste and are too brittle to become tender when cooked.

Caps that “snap like damp chalk when you break them off the tree,” Rachel Shulman of the sustainable living blog Insteading advises, “are definitely too old to eat.”

There is a separate species known as the white-pored chicken of the woods (Laetiporus cincinnatus).

This can be distinguished from L. sulphureus due to its rosette growth formation as opposed to stacked brackets and its cream-colored underside and reddish-orange surface with little to no yellow coloring.

Where To Find Chicken of the Woods

Chicken of the woods can be found growing throughout Europe and Eastern North America on standing or felled wood, commonly on the dead or decaying trunks of oak trees.

Does Chicken of the Woods Grow on Maple Trees?

Chicken of the woods can also grow on hardwood maple trees (such as black maple and sugar maple), according to Midwest America Mycological Information.

You can easily grow your own chicken of the woods on a 3-foot maple log from a recently felled tree since older wood will have already bred fungal spores.

Are Chicken of the Woods Safe To Eat?

Chicken of the woods is considered a safe fungus to eat when cooked thoroughly, but this depends on where it grows.

Expert wild food educator Karen Stephenson of the blog Edible Wild Food advises consuming chicken of the woods that “grow on deciduous trees only” such as oak, maple, beech, etc.

“Those growing on Yews, Conifers, Cedars, Hemlocks, and Eucalyptus” Stephenson warns, “may absorb some of their oils which contain toxins.”

Can You Get Sick Eating Chicken of the Woods?

As long as it is harvested from the right source, picked in its youth (bright colors, tender springy texture), and cooked thoroughly, chicken of the woods shouldn’t cause sickness.

However, some people with food sensitivities may experience nausea, lip swelling, or lightheadedness, though adverse reactions are more likely when older (paler) fungus has been consumed.

Chicken of the woods can also be purchased dried or fresh, but be careful to “ascertain exactly what the species is” urges medicinal mushroom guru Austin Collins at Healing Mushrooms, “as there is a lot of contradictory information as to where or how Laetiporus sulphureus grows.”

Can You Eat Chicken of the Woods Growing on Pine?

Chicken of the woods growing on pine should be avoided at all costs as these are coniferous (not deciduous) trees which contain toxins that can become absorbed by the fungi, causing serious gastric upset in humans.

Does Chicken of the Woods Actually Taste Like Chicken?

According to Mushroom-Appreciation, some foragers have likened the taste to chicken or a generic meaty quality, while others have described it as having a lemony flavor and sometimes resembling “cooked crab or lobster.”

Chicken of the Woods Look-Alikes

While these varieties bear the same sulfur-yellow underside coloring and layered fan-shaped brackets, they grow on the sides of conifer trees such as spruce, fir, and hemlock.

Another possible look-alike is Meripilus giganteus for its similar habitat, though this species has a tan-brown surface with brown/black bruising on the margins.

Is There a False Chicken of the Woods Mushroom?

From above, the bright orange or yellow velvety surface of the poisonous jack o’lantern mushroom (Omphalotus illudens) grown in the forests of North America can easily be mistaken for L. sulphureus, but discerning foragers will spot the gills beneath their cap instead of pores.

“Combining the location with some macro morphological characteristics is the easiest way to determine if you have found a true L. sulphureus” shares life-long mushroom hunter and photographer Barbara Batokova at Fungi Woman. 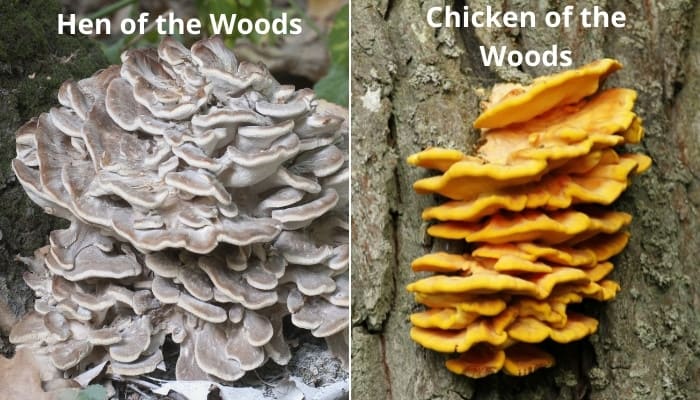 The maitake or hen of the woods mushroom (Grifola frondosa) is a separate fungi species derived from the Meripilaceae family as opposed to the Polyporaceae and has a noticeably duller, gray or sometimes brown appearance.

Their caps are much smaller with distinctive ruffling and grow in tight clusters as opposed to defined stacks which give them the appearance of hen feathers.

How Do You Wash Chicken of the Woods?

Place the entire cluster in a sink filled with cold water, and carefully pull apart each cap, checking for any damage, bugs, or discolored sections that should be removed with a sharp sterile knife and discarded.

After trimming the mushroom caps, rinse each healthy piece individually and pat-dry them quickly with a paper towel to prevent waterlogging them.

What Time of the Year Do You Find Chicken of the Woods?

It is most abundant from early summer to fall with the growing season typically beginning in late May and ending around late August.

However, forager and nutritionist Adam Haritan of Learn Your Land has encountered chicken of the woods in late November in western Pennsylvania.

Does Chicken of the Woods Grow in Spring?

Chicken of the woods can occasionally grow in spring when the weather brings periods of consistently cool and damp evenings as this harbors the perfect conditions for the fungi to spread its spores.

How Do You Dry Chicken of the Woods?

For great results, Oliver Carlin of the wellness site Curative Mushrooms recommends slicing the mushroom into half-inch chunks before placing them in a food dehydrator (if you don’t already have one, this one is amazing!) and setting a low temperature for 8-10 hours.

Note that it will become quite woody and tough when dried.

How To Store Chicken of the Woods

You can freeze the uncooked mushrooms for up to 12 months or store them in a paper bag in your refrigerator’s vegetable drawer where they can remain fresh for up to 7 days.

Dehydrated mushrooms can be stored for 7 months in a sealed mason jar or Ziploc bag in a cool, dry place.

How Do You Eat Chicken of the Woods?

Chicken of the woods can be used in soups when cut into chunks but the simplest method is by cutting them into strips like real chicken and marinating them in soy or teriyaki sauce before grilling or pan-frying them.

How Long Should You Cook Chicken of the Woods?

Grilled or pan-fried mushroom strips should be cooked on medium to high heat for about 5 minutes on each side until golden brown.

if cooking in the oven, they should be baked in a preheated oven for 20-25 minutes at 350 degrees.

How Do You Know If Chicken of the Woods Is Cooked?

Depending on your cooking appliances, it may take longer than 5 minutes on the grill or more than 25 minutes in the oven to cook properly.

Is Chicken of the Woods a Polypore?

Yes, polypore refers to groups of fungi with large fruiting bodies that grow in a bracket formation, often with pores on the underside of its flesh as with chicken of the woods.

This fungus also goes by the name sulfur polypore according to The Wildlife Trusts.

Does Chicken of the Woods Come Back Every Year?

Chicken of the woods begins life as parasites that feed off the decomposing wood and send out fruiting bodies in the summer.

They continue developing until fall before dying back in the winter, but their pores release fungal spores in the same spot to begin reproducing in the following spring.

How To Grow Chicken of the Woods

During winter, cut a healthy living log from a deciduous tree such as oak that is at least 3 feet long and measuring 4-6 inches in diameter.

To encourage fruiting for many years, you’ll need to treat it by steaming or boiling and inoculating it by drilling holes into the log and inserting root mushroom spawn before incubating.

Here is a detailed guide on growing chicken of the woods indoors.

To summarize, chicken of the woods is a safe, edible mushroom when prepared and cooked thoroughly and is best harvested in its juvenile stage when the caps boast a striking orange and sulfur-yellow shade and feel tender and spongy to the touch.

Beware of toxic false fungi that share the bright colors and fan-shaped brackets of chicken of the woods.

Remember that the original and safest form has a smooth, porous underside instead of gills, only grows on deciduous trees, and is found in eastern North America and Europe.