So, you want to grow cucumbers, but you’re not into that whole having-to-deal-with-setting-up-a-trellis and dealing-with-long-messy-vines part of the picture.

Lucky for you, you’re about to discover the magic of bush cucumbers.

What are bush cucumbers? Bush cucumbers are miniature versions of their larger vining counterparts. They require very little space, produce just as much fruit as bigger cucumber plants, and more often than not, don’t need a trellis either. There are over a dozen tried-and-true varieties and more are bred each year.

Read on below to learn everything you need to know about these space-saving bush cucumber options!

Bush cucumbers are freestanding bushes that grow, bloom, and produce fruits. Vining cucumbers aren’t bushy, so they need a trellis or some sort of support system.

That’s why bush cucumbers do well in pots or the garden, and vines do better in the garden where they have more space for their trellis.

Besides this major difference, vining and bush cucumbers are pretty much the same: they both produce fruits between 6 and 12 inches long, grow all season long, and are good for canning, slicing, and eating raw.

What Are Bush Cucumbers Good For?

Bush cucumber plants are best for growing in small garden spaces, pots, and even hanging containers and window planters.

Bush cucumbers are available in over a dozen species from large bushes with 2-foot long vines that love to climb to 12-inches tall dwarf bushes that produce as many fruits as their much larger counterparts.

There are also numerous new hybrid varieties popping up in containers and gardens around the world each year.

The Spacemaster variety of cucumber plant is a dwarf bush, making it ideal for compact gardening spaces as well as hanging baskets.

These bushes produce uniform fruit, approximately 8 inches in length and non-bitter in taste.

The Bush Champion cucumber is one of the most popular dwarf varieties thanks to its ability to produce fruits between 8 and 12 inches long.

The best part about them is that they don’t need a trellis like other cucumber species that produce such large fruits.

The Salad Bush variety of cucumber plant is another small one that has the potential for massive yields.

They are among the most disease and pest-resistant variety of bush cucumbers, but their fruits are rarely over 7 or 8 inches in length.

The Burpless Bush-type cucumber plants are one of the largest bush cucumber varieties.

Unlike most of the other small cucumber varieties, this one requires a bit of trellis or something to support its 18- to 24-inch vines. 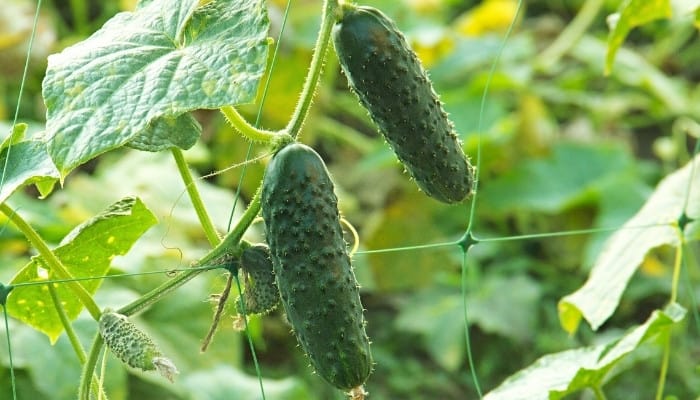 Can You Eat Bush Cucumbers?

Bush cucumbers are just as edible as “regular” varieties, making them ideal for slicing, pickling, or eating raw.

The main difference between bush and standard cucumbers is found in the size of the plants.

The fruits from bush cucumbers and standard garden cucumbers are practically the same: 7 to 8 inches, give or take an inch or two.

How Tall Do Bush Cucumbers Grow?

Bush cucumbers are essentially bushy dwarf cucumber varieties that grow to heights of 1 to 2 feet tall. Some bush cucumbers grow short 18- to 24-inch vines off to the sides or up trellising.

Their size makes them excellent candidates for containers and small gardens.

Most bush cucumbers grow like small shrubs and don’t need to climb.

However, there are a few bush-variety cucumbers that do indeed climb (such as the Burpless Bush Cucumber plant) and seem to enjoy doing so.

That’s why investing in a small 2- to 3-foot tall trellis for bush cucumbers is a good idea if you plan on growing a variety of them.

Do I Need a Trellis for Bush Cucumbers?

You don’t need a trellis for most bush cucumbers. That said, a few species, like the Burpless Bush cucumber mentioned above, do indeed benefit from a trellis.

That’s because they are capable of growing vines up to 2 feet long, whereas most bush cucumber varieties don’t grow long vines.

The majority of bush cucumbers are determinate. That is to say that they can grow, produce mature fruit, and continue to bloom and fruit through the entire gardening season.

This makes them perfect for growing in greenhouses, balconies, and in containers in small spaces.

How Many Cucumbers Does a Bush Plant Produce?

Bush cucumbers are capable of producing between 10 and 20 fruits in a period of just 2 to 3 weeks.

Furthermore, thanks to being determinate, they may continue this process several times over the course of the growing season, giving you dozens of fruit before they stop producing for the year.

Bush cucumbers are indeed self-pollinating. That means just one plant is enough for proper pollination to occur because cucumber plants grow both male and female parts.

However, removing the male flowers (if you have multiple plants) helps prevent a bitter flavor.

Purchasing your first bush cucumber seeds doesn’t have to be like hunting for a needle in a haystack or make you feel like you’re on a wild-goose chase either.

If your local co-op or gardening center is out of stock or doesn’t carry them or you simply don’t have the time to go look for them, ordering them online is an excellent alternative method.

How To Grow Bush Cucumbers

Growing bush cucumbers is fun, rewarding, and much easier than growing standard-size plants. Below, we discuss everything you need to know before you grow your first dwarf cucumber bushes:

The steps to planting bush cucumbers include:

Bush cucumbers aren’t much different to care for than standard-size cucumbers. In fact, thanks to their much smaller size, caring for them is much easier.

If they are planted in well-draining soil with organic matter, as they should be, the typical bush cucumber plant in the garden (or pots) requires watering every 2 to 3 days during the warmest parts of the growing season.

When the plants begin blooming for the year, apply a light general-purpose gardening fertilizer to them. Espoma Garden-tone is excellent!

Besides keeping them well watered and fertilized, all you need to do is keep an eye out for issues, and tackle them head-on if and when they occur (such as pests or soil-borne diseases).

When To Pick Bush Cucumbers

The majority of bush cucumbers are ready for harvesting when they are dark green, firm when you squeeze them, and 6 to 8 inches in length.

That’s typically approximately two to two and a half months after planting.

Some varieties may be left on the vine until they reach slightly longer lengths (up to 10 or 12 inches).

At any rate, most gardeners prefer picking their bush cucumbers as soon as possible because they are sweet rather than bitter (like older more mature fruits).

Plastic or ceramic containers are the best choices of material when it comes to growing bush cucumbers in pots.

Both plastic and ceramic pots allow for better water retention rates than pots made out of other materials.

The size of the pot you choose for your bush cucumbers isn’t crucial but should be at least 10 to 14 inches deep to accommodate the root systems of the plants.

Some gardeners choose rectangular window boxes or planters for their dwarf cucumbers, while others prefer 18- to 24-inch pots.

These bigger circular pots are typically adequate space for around five plants, while the planters for windowsills and balconies only fit two or three.

Bush cucumbers are an excellent space-saving option with high yields of fruit. They taste the same as larger species, and some claim they are even sweeter.

In fact, bush cucumbers can even be grown in pots, indoors, on balconies, and on windowsills as well as in small garden spaces.

In case you’re curious, they are a terrific option for hydroponic growing too!