Because Venus fly traps are notorious carnivorous plants, there is this widespread misconception that they are dangerous to humans and other animals.

Thankfully, they are nothing like the ravenous, horrifying creatures depicted in some movies and comics.

Are Venus fly traps dangerous to humans? Venus fly traps are not poisonous, do not have teeth, and cannot bite, so they pose no threat at all to humans. The traps are only designed to close around small insects so that the plant can digest them and extract nutrients. While a trap may close around a finger if inserted, it cannot cause harm.

Though Venus fly traps may have a formidable appearance, they are actually not a safety concern in the slightest.

The hairs on the ends of each of their traps greatly resemble teeth, and while this can put a person on edge, they cannot harm you.

However, you can accidentally harm a Venus fly trap, so it is crucial to know how to tend to its needs.

Many people have a misguided idea about these amazing plants. The following frequently asked questions will clear up any concerns you may have.

Can a Venus Fly Trap Hurt Your Finger?

When you stick your finger inside of a Venus fly trap, you will trigger the trap to close.

If you were a tiny insect, the motion of the plant would be potentially lethal, but to a human, it feels almost like nothing except a slight pressure.

There is no poison inside the trap nor anything pointy or harmful, so no harm will come to your finger.

You can easily remove your finger once it is stuck in one of the traps because the trap will be unable to fully close around you.

Even if you left your finger there for days and weeks on end (which would be impossible!), you may lose a bit of skin or turn a strange shade, but it will not hurt, and there will be no lasting damage.

Is It Safe to Touch a Venus Fly Trap?

For a human, it is absolutely safe to touch a Venus fly trap. No harm will befall you if you touch it—you probably won’t even feel it.

For the plant, however, this could cause serious problems. It takes a great deal of effort and energy for the plant to close, so forcing it to do so unnecessarily is harmful to its health.

Can a Venus Fly Trap Bite You?

No! A Venus fly trap cannot bite you. It can lightly close around your finger, but this is not a bite. There are no teeth on a Venus fly trap, nor anything that could cut, scrape, or puncture you.

What If I Put My Finger Inside of a Venus Fly Trap?

You will not be harmed if you put your finger in a Venus fly trap, but the plant may be damaged.

Each trap on the plant can only close a handful of times before it dies off. When you trigger it to close unnecessarily, you are only speeding up its death.

While it is natural and normal for the plant to lose traps and leaves throughout its life, you do not want to speed this process up or you risk killing the entire plant.

No, no poison exists in a Venus fly trap. Some traps release enzymes when they close, but they are not poisonous and thus unable to break down a human finger or other body part.

Venus fly traps are nontoxic plants, so if your curious dog accidentally takes a nip out of your plant, the dog will be fine.

The plant may suffer from this loss of leaves, but it can recover if treated with care.

Even the ASPCA proclaims Venus fly traps to be perfectly safe to have around your pets.

Venus fly traps are not a threat to your cat or other pets either. Because the plant is nontoxic, your cat can take a curious bite and not experience any complications.

Again, the plant may suffer as a result, but your cat will be just fine.

Just as all plants are living organisms, so too are Venus fly traps. But do they have thoughts? A vindictive desire to eat your finger? No, they do not.

They are alive, but they are not capable of cognitive thinking as humans or animals are. 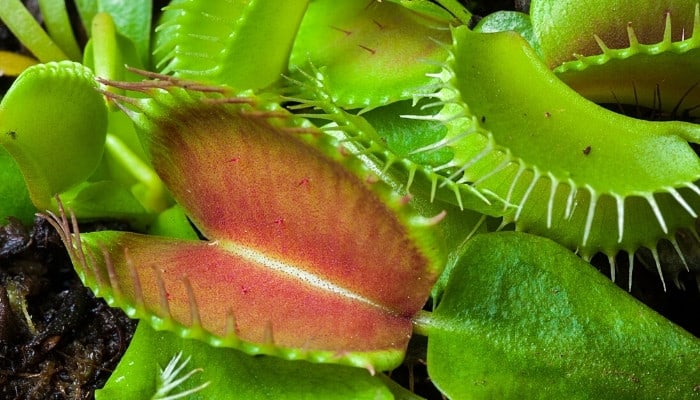 There are hairs on the end of each trap of a Venus fly trap commonly called trigger or sensitive hairs.

When something comes in contact with these hairs, the hairs tell the plant to close that particular trap.

The leaves of the fly trap can close in 1/10 of a second, which is pretty incredible! Once the leaves are closed, the plant begins churning out enzymes to break down and digest its prey.

Indeed, you will not be hurt in any way if you stick your finger in a Venus fly trap, but you will most likely harm the plant.

Each trap on a Venus fly trap can only close a handful of times before it dies off.

If you trigger this response unnecessarily, you will bring the leaves and, eventually, the plant to premature death.

It can be fascinating to watch the fly trap close, but instead of provoking the plant unnecessarily with your finger, why not feed it real food in the form of insects and watch it do its thing that way?

What Is the Biggest Venus Fly Trap?

One single trap on Harris’ plant measured 2.4 inches or 6.1 centimeters!

How Long Can a Venus Fly Trap Live Indoors?

Venus fly traps can live for up to 20 years indoors if cared for properly. However, most people find that these plants prefer being outside where insects are plentiful.

If you treat the plant with care and attention, the relationship will be beneficial all around.