Venus fly traps are fascinating and can make great houseplants. However, their diets are delicate, and owners must know what types of food are best for their fly traps.

There are many foods that may seem like scrumptious snacks for your plant that are actually dangerous to its health.

Can you feed a Venus fly trap hamburger? Venus fly traps should not be fed hamburger. Doing so will likely cause leaf death, and the entire plant may die as well. Hamburger is not part of the plant’s diet as it is too high in fats and protein, and the Venus fly trap is unable to digest it properly.

Below is a more in-depth explanation of why you cannot feed your Venus fly trap hamburger. Instead, you will find some alternatives that your plant will be happy to eat.

There is also a compiled list of other off-limits foods that should not be provided to your Venus fly trap.

Because these plants generally eat insects in the wild, it is best to mimic that environment, and we’ve found the best options to do just that.

Hamburger is not something a Venus fly trap would generally ever be able to find on its own, but there is a long list of prey that are perfectly acceptable.

Feeding Venus Fly Traps Hamburger: What You Need To Know

It’s commonly said that because Venus fly traps feast on insects in their natural habitats and do not get that same input of nutrients when cared for as indoor house plants, they should be fed hamburger meat to replace the missing nutrients.

This is not a good idea.

In short, you could easily end up killing your Venus fly trap.

Hamburger Contains Too Much Fat

The fats present in hamburger meat are too much for your Venus fly trap to consume.

Insects that the plant would normally consume do not naturally contain much fat, so the trap is not used to this quantity of fat at all.

Remember the last time you had such bad indigestion that you were scrambling to find the Pepto? This is the feeling you will give your Venus fly trap if you feed it hamburger.

Unfortunately, the Venus fly trap, though carnivorous, is not able to digest such large quantities of fat and protein that are present in hamburger meat.

By feeding the plant this unnatural diet, you will essentially send your Venus fly trap into very unpleasant and harmful indigestion.

The smell of your delicious hamburger may attract insects, rats, and other pests.

Not only will your Venus fly trap struggle with the digestion of hamburger meat, but it may also give up completely.

It may choose to kill off that particular leaf instead of going through the hassle of attempting to digest the hamburger meat fully.

When the Venus fly trap kills off its leaves, they will drop off, and the undigested hamburger will attract pests as it’s left out.

Then you’ll be left with a hoard of unwanted pests to tend to in addition to an unhappy plant.

Hamburger May Kill the Trap or Entire Plant

You could accidentally kill your Venus fly trap if you feed it a hamburger, and this is certainly not the goal.

Feeding the plant one piece of hamburger one time by accident is one thing, and this is not likely to kill your plant.

But to continuously feed it foods that it cannot digest? This could ultimately lead to the death of your fly trap.

All that excessive protein and fat will cause it to wither and likely die after long enough periods of mistreatment. 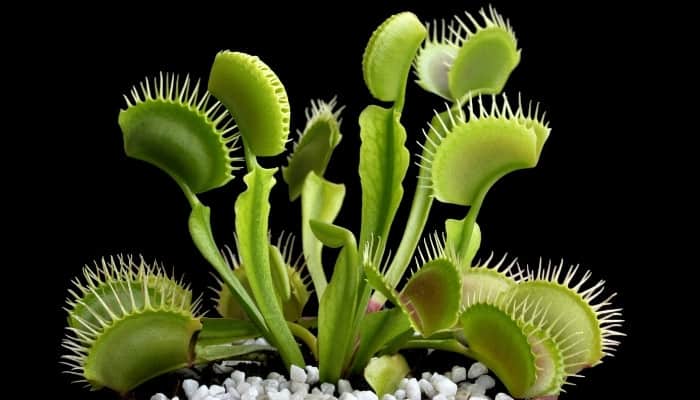 In the wild, Venus fly traps feast on insects and bugs. The best way to keep your plant happy and healthy is to feed it foods that mimic its natural diet.

As a general rule of thumb, you should only feed your Venus fly trap bugs that are ⅓ the size of the trap.

So for small or young plants, it could be necessary to break up a whole bug into smaller pieces that you can feed to them.

In all cases, make sure that the prey is small enough to fit entirely into the trap and not hang out in any way.

Smaller bugs that are great options for smaller plants are:

For larger and older traps, it is fine to feed them whole bugs.

Sticking with the ⅓ rule, you still want to find generally smaller bugs, but you most likely won’t have to go through the process of breaking anything up.

Even for larger and older traps, remember to fit the insect inside of the trap fully.

First and foremost, hamburger is an inappropriate food for your Venus fly trap. Also, you should never feed your fly trap any of the following:

Can You Feed a Venus Fly Trap Worms?

You absolutely can feed a Venus fly trap worms. Bloodworms and mealworms are best, especially when already dead or broken up.

Feeding them full-sized common worms from your garden, however, is not the best idea.

Not only will full-grown, live worms be too large, difficult, and fidgety for your trap to digest, but they are also much harder to come by than a simple container of dead worms from the store.

Can You Feed a Venus Fly Trap Mealworms?

Yes, mealworms are a great option for your Venus fly trap. You can find these easily in stores that carry pet supplies, and your plant will love the nutrients.

Never feed your Venus fly trap hamburger. You may kill your plant even while having the best of intentions for it.

Instead, opt for some of the items listed above, and your Venus fly trap will thank you.