Rhododendrons can grow to be 30 feet tall and almost as wide. However, they will struggle to reach that size if they are being decimated by deer.

Deer are known to eat over 100 different types of plants, but the issue arises when your prized plant becomes their latest snack.

In winter, food sources become scarce for deer, and they will begin eating plants that they don’t usually target.

While your rhododendron might not be their favorite flavor, a hungry deer will eat what it can find to stay nourished during the scarce months.

To protect your rhododendrons, you’ll need to employ one or more of the following methods.

How To Keep Deer From Eating Rhododendrons

Prevention is the best way to stop deer from eating your rhododendrons. Once they have found a food source, they will keep returning to it.

Here are some of the best ways to prevent deer from eating your plants.

This is a technique that is commonly used by gardeners in winter to protect their rhododendrons from hungry animals.

It is budget friendly to purchase a snow fence (3-5 feet tall) and install it yourself, but a hungry deer is more than capable of jumping this.

Another option is to install a much taller decorative (but still effective) fence around your garden.

In general, deer avoid plants with strong fragrances. However, an extremely hungry deer will be less particular about the smell or flavor of the food they are eating.

There are some varieties of rhododendron that seem to be less bothered by deer:

Another option to protect your rhododendron is to surround the rhododendrons with fragrant plants that are off-putting to the deer.

Some examples include boxwoods, juniper, shrub roses, daphne, and bayberry.

While this will not guarantee that the deer won’t still find your precious shrubs, it can help prevent them from exploring the area.

Deer can often be seen grazing at dawn and dusk, but they will also eat throughout the night while you’re asleep.

Placing netting over your rhododendrons will prevent both daytime and nighttime feedings, and it will not stunt the growth of your plants.

When done well, this method provides your shrubs with protection and isn’t an eyesore either. Here’s how:

In addition to strong-smelling plants, there are other odors that deer tend to avoid.

You can spray your plants with a commercially-made deterrent, like this Liquid Fence concentrate, or you can create your own.

Some of the odors that deer dislike include:

Devices that detect motion and then scare off the “intruders” without causing any physical harm can be very successful in keeping deer (and other critters) away from your plants.

Motion-activated sprinklers, like this battery-operated device, scare away deer with a harmless blast of water.

Other motion-activated devices, like this solar-powered deterrent, use flashing lights and ultrasonic sound to chase away pests. 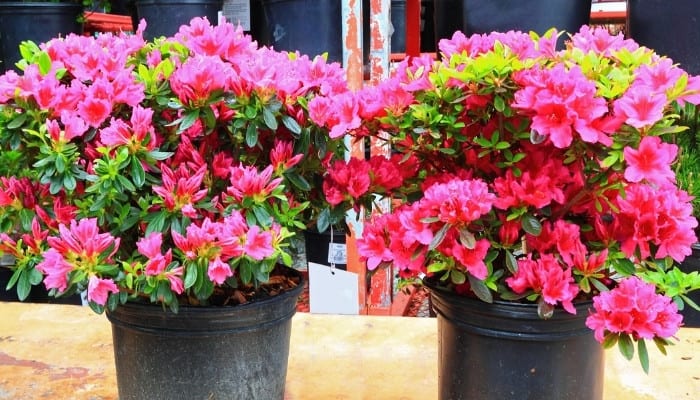 Evergreen azaleas are a favorite food item for deer. They will eat any variety of azalea.

Many gardeners have reported that deer have different eating patterns from year to year. They won’t touch an azalea plant for years and then suddenly begin eating the plant.

Are Rhododendrons Toxic to Deer?

Yes, rhododendrons are toxic to deer. However, the animals typically don’t eat enough in one feeding to cause symptoms.

Deer, and many other herbivorous mammals, can eat toxic plants because they consume small amounts of a variety of species of plants each day.

Scientists even have a theory that the small amounts of toxins can help kill any intestinal parasites the deer might have.

Will Rhododendron Grow Back After Deer Eat Them?

Rhododendrons are capable of growing back after being eaten by deer. The growth rate will depend on how healthy the plant is and how much of the plant was eaten by deer.

Expect plants that have been hit hard by the pests to recover slowly, but rhododendrons are tough, hardy plants, and they should recover eventually and go on to live the long life for which they are known.

What Are the Best Deer-Resistant Flowering Shrubs?

Hydrangeas are generally left undisturbed by deer. However, when the deer have little to no established food sources available, they will branch out and try new plants.

While rhododendrons can be a target for deer, there are plenty of strategies to protect your plants, some more effective than others.

A little effort on your part can allow your rhododendrons to thrive year round and avoid becoming a meal for a hungry deer.

Is it worth it? One look at a rhododendron in full bloom will convince you that it most definitely is!