Chamomile flowers are used by many cultures throughout the world in teas, herbal remedies, and traditional medicine.

They are also decorative flowers that can be seen as a wildflower or in cultivated gardens.

There are actually multiple varieties of chamomile within the Asteraceae family. The top “medicinal” varieties are German chamomile (Matricaria chamomilla) or Roman chamomile (Chamaemelum nobile).

Where do chamomile flowers grow? Chamomile is native to western Europe, India, and Asia. However, their weed-like ability to grow in many environments and climate have allowed the plants to grow around the world. In the United States, chamomile is commonly seen growing on the side of roadways and in pastures.

The adaptable nature of chamomile can make it a nuisance in certain areas, but this feature makes the plant an easy-to-grow addition to most gardens.

Continue reading to find out more about where chamomile grows naturally and how to grow it in your garden.

While the two main varieties of chamomile, Roman and German, are the most well known, there are a handful of varieties that use the common name of chamomile.

These other varieties are not typically used in herbal remedies or cosmetics.

German chamomile is native to Asia and Europe. It is commercially cultivated in Egypt, France, Eastern Europe, and Hungary.

Roman chamomile is native to North Africa and Western Europe. This variety is commercially grown in England, France, Belgium, Argentina, and the United States.

After being introduced to the United States for commercial use, chamomile has spread as an invasive weed throughout most of the country.

You can see chamomile growing throughout pastures, yards, roadsides, and any area with adequate sun exposure.

How To Identify Chamomile

Wild chamomile can be identified by its small flowers (similar to a daisy) with white petals and yellow centers.

German chamomile will have a single flower per stem and Roman chamomile has multiple flowers on branched stems.

German chamomile leaves have been described as “fern-like” and feathery.

The Roman variety has leaves with multiple lobes (similar to cilantro). In optimal conditions, the plants can grow between 1.5-3 feet tall.

Depending on the climate and environment, chamomile blooms between May and October.

Where Chamomile Flowers Grow Best in the Garden

Both varieties of chamomile prefer full sun for optimal growth. German chamomile can survive in partial shade and is a better variety for gardens that receive less sunlight. 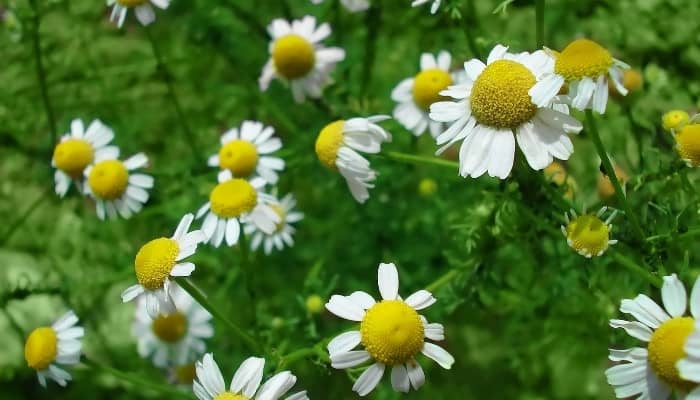 How To Plant Chamomile Seeds

The seeds need sunlight to germinate, so sprinkle them onto the growing medium, and gently pat them into the soil. Place the seed starter tray in a bright location, and keep the soil moist.

You can expect germination within two weeks. The seedlings can then be planted in a sunny spot outdoors or grown in containers indoors.

If you’d prefer to directly sow your chamomile seeds outside, it is recommended to plant the seeds in the fall. Just like indoor planting, spread the seeds over the soil, and gently tamp them into the soil.

Keep the area moist until the seeds germinate. Flowers can bloom within 6-8 weeks of seed planting.

How To Take Care of Chamomile Flowers

Chamomile is very drought tolerant, but the shallow roots can dry out too much in garden conditions.

Make sure the plants are in well-draining soil to prevent excess water from sitting around the roots. Water whenever the soil feels dry. Mulch helps maintain moisture while protecting the roots.

This easy-going plant does not need much fertilizer. In the spring, apply a thin layer of compost or slow-release fertilizer to the soil.

You can use a balanced fertilizer that comes in granular form (like this one) for easy application. Make sure you water before and after fertilizer or compost application.

For overwintering perennial Roman chamomile, begin tapering the frequency of watering in the fall. Apply a thick layer of mulch to insulate the plant and the roots.

Does Chamomile Grow Back Every Year?

Roman chamomile will grow back every year with proper winter care. An application of fertilizer in the spring will give the plants all the nutrients it needs to bounce back.

German chamomile is an annual that will die at the end of the season. It will self-sow seeds that will germinate in the spring, usually creating a larger spread of chamomile than the year before.

Are Chamomile and Daisies the Same?

There are many flowers with the common name “daisy,” but the term generally refers to flowers in the Asteraceae family.

All varieties of chamomile are part of the Asteraceae family, but they are generally not considered a “daisy.”

Whether you are looking to add beautiful, petite flowers to your garden or you want to start brewing your own herbal tea, chamomile is an easy addition to any garden.

Thanks to chamomile’s weed-like and easy-going nature, all skill levels can watch this plant thrive in their garden with just a little routine care.