Elderberries have been used for generations as an herbal remedy for many illnesses including the flu and common cold.

There is even some anecdotal evidence that these treatments may actually have a real-world benefit. Understanding the toxicity that comes with elderberries is important, though, as is knowing how to neutralize the toxicity.

Why do you have to cook elderberries? Elderberries contain a toxin known as glycoside that is removed during the cooking process. The glycoside in elderberries can cause nausea, vomiting, and loose stools as well as a possible coma. Depending on the amount ingested and the individual’s sensitivity, hospitalization may be needed.

Eating Elderberries – What To Know

It’s important to understand how to eat elderberries to remain safe from the glycoside that exists in their raw form.

Every variety of elderberry is considered toxic. Elderberries are toxic to humans as well as pets, so take care where you plant them if you have pets that are known to eat vegetation.

What Parts of the Elderberry Plant Are Poisonous?

Aside from the ripe berries, there is no part of the plant that’s safe to eat, including stems, leaves, seeds, and roots.

Can You Eat Elderberries Raw?

You cannot eat elderberries raw. Depending on your sensitivity to the berry and the specific type of elderberry, you could ingest a few with no ill effects, although it’s better not to risk it.

The only really safe way to eat elderberries is to cook them first.

How Many Elderberries Will Kill You?

While there has never been a documented case of a death from eating raw elderberries, the number that it will take to kill a person is likely significant.

Symptoms of elderberry poisoning include:

Are Dried Elderberries Safe To Eat?

Are Cooked Elderberries Safe To Eat?

Heat treating ripe elderberries is the only safe way to eat them.

What Does Cooking Due To Elderberries?

There are two types of nutrients in elderberries. Minerals and antioxidants. Both are beneficial, but antioxidants are more susceptible to being destroyed by heat.

How Long Should You Cook Elderberries?

In order to preserve the antioxidants in elderberries, it’s recommended to cook them in a hot water bath for 45 minutes.

45 minutes will destroy the glycoside in the elderberries but only reduce the antioxidant levels by approximately 50%.

This leaves some of the immune-boosting benefits of elderberries intact while making them safe to eat.

One of the other benefits of cooking elderberries is that it improves their taste. Raw elderberries taste earthy or potentially bland with the only real taste often described as tart or bitter.

When you cook elderberries, the flavor profile changes to a more sweet, juicy berry.

The reason that elderberries are often used as syrups or jams is to offset some of the bitterness by adding sugar to the recipe.

What Is the Best Way To Eat Elderberries?

If you’re looking to enjoy them as a healthy condiment, then making them into a jam or syrup is the best way. 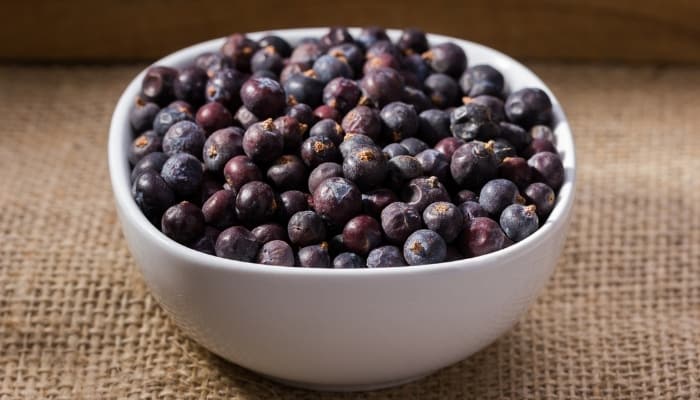 How To Cook Elderberries

There are several ways to cook elderberries from eating them plain to making them into juice or jam. Here are a few methods:

A light simmer for 45 minutes is the best way to begin to prepare your elderberries. This neutralizes the glycoside in them and makes them safe for any further preparation.

You can also eat them plain after simmering them.

Elderberry syrup is easy to make. All you have to do is take your elderberries that have been simmered for 45 minutes and squeeze the juice out of them into a container.

Add some honey or a simple syrup to add sweetness, and you’ve got elderberry syrup!

Elderberry jam is largely made the same way as syrup. Except after you’ve squeezed the juice from the elderberries, you add it, along with lemon juice and pectin, to a pot and boil them.

Then you add sugar and butter to the mix and return it to a boil. After that’s done, add it to canning jars and let it set.

With this recipe, you don’t have to simmer the elderberries for the full 45 minutes initially since there’s a significant amount of boiling that happens afterward. It will neutralize the glycoside as a byproduct.

Elderberries Mixed With Other Fruits

Whether you’re making jam, wine, syrup, or pie filling, elderberries can be added to any fruit recipe to give it an earthy undertone and a nice health boost.

Why Are Elderberries Good for You?

Elderberries are full of nutrients and immune-boosting antioxidants including:

Elderberries have been shown to potentially improve the impacts of viral infections and lead to quicker recovery times.

Are Wild Cherries Safe To Eat?

Most wild cherries are safe to eat, but they are also tart cherries that are better suited for pies and jams.

Elderberries are a great fruit to forage for or to grow in your backyard.

Knowing how to cook them before consuming them is important, though, and can prevent a host of ill effects brought on by consuming elderberries raw.