Thuja, also known as Green Giants, are among the best evergreen species for hedges and landscaping.

They stay green all year, grow tall and full, and are relatively easy to prune compared to most similar species.

You might be surprised to learn that Thuja doesn’t always even require pruning.

In the following, you’ll learn how and when to prune Thuja Green Giants as well as the answers to several important related questions.

Let’s get to it then!

The first step to pruning Thuja is spotting and removing the dead branches. Most of the dead growth is easy to spot as it is often brown, black, or yellow rather than green.

These branches may come off with very little effort on your part (sometimes pruners aren’t even necessary).

After the dead growth has been removed from the tree(s), it’s time to find the areas with too much growth.

Branches that are sticking out from the rest of the tree or are twisted and overlapping need removing during this step.

To do so, use hand pruners or heavy-duty shears to cut the branches off as close to one of the main/lateral branches as possible.

3. Cut Back To Promote a Wider Girth

Measure your tree or eye-ball it, and remove the top one-third. Heavy-duty hand pruners may be required to cut through a few of the biggest branches.

This optional step encourages thicker and wider growth from your Thuja Green Giants, but be aware that this will leave an unattractive, bare area on the top, which will be very slow to fill in, if it does at all.

After you’ve removed dead branches, cut away excess growth, and dealt with any problem issues, it’s time for the finishing touches.

Whether you opted to cut the top of your tree(s) off for wider regrowth or not, trimming the tops a little bit is necessary to give your tree(s) a uniform look.

Simply use a pair of hand pruners or snippers and remove any branches or greenery that looks out of place.

Keep in mind that very little to no trimming is actually needed for Thuja to reach its full potential height or to keep its iconic shape.

When your Thujas are young, they need pruning in the spring or summer and again in the autumn.

Once the trees are established, lighting pruning once per year in the late summer or early autumn is more than adequate (unless you’re training them to have some sort of unique shape or keeping them small).

That said, Green Giants react well to pruning nearly any time of the year.

Can Thuja Green Giant Be Topped?

Thuja Green Giants can indeed be topped. In fact, topping 20% to 30% of the tree is the best way to promote thicker, wider, healthier growth.

Topped Thuja trees are also capable of handling a heavier load of snow and ice in the winter (with fewer branches breaking).

The downside is an unsightly top that looks bare compared to the rest of the tree.

Can Green Giant Arborvitae Be Shaped?

Green Giant Arborvitae is in fact one of the easier evergreen species to shape into hedges or ornamental landscaping, in part thanks to their size and growth rate.

Additionally, they are among the easiest worry-free species to maintain once shaped, requiring very little (if any) trimming each year.

What Happens When You Top a Green Giant Arborvitae?

Topping Green Giants is a bit different than topping fruit trees and common species for landscaping.

When you cut the top off of a Thuja tree, it loses its classic pyramidal shape and grows back in a box-like shape.

That’s why Green Giants make such great hedges (and the fact that they don’t take much maintenance after topping, unlike most species).

Should Thuja Be Cut Back?

Believe it or not, most Thuja don’t actually need to be cut back each year. A light trim in the spring or fall is typically sufficient for maintaining a Thuja hedgerow or ornamental tree.

Unless you are attempting to stimulate your Thuja into growing taller, there is no normally no need to cut it back after you’ve given it the shape you desire.

How Far Back Can You Trim Thuja Green Giant?

The Thuja Green Giant may be trimmed back by approximately 30% of its overall size. Removing anything more causes the tree to bush out rather than retain its pyramidal form.

That said, you can technically trim a Thuja down to around 12 inches or so, though it isn’t recommended to go under 36 inches, so long as the hedge is 6 inches to 8 inches wide.

It is suggested to remove no more than 12 inches or so at a time from Thuja Green Giants that are already short hedges. Otherwise, the hedge may go into shock and die. 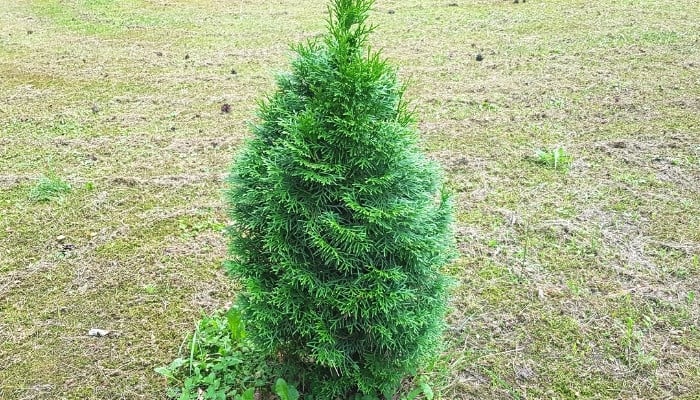 It is more than possible to keep Green Giant Arborvitae small for their entire lifespan, but they will need pruning each late summer or autumn.

Both the tops and sides need trimming regularly if you want to keep your Green Giants small.

It is crucial to mention that the lifespan of the plant may be dramatically reduced if it is kept small.

Will Arborvitae Branches Grow Back?

Most Arborvitae branches grow back after being damaged or pruned. In fact, they may grow back as rapidly as 12 inches annually.

So, if your Thuja has been the target of pests, storms, or heavy-handed pruning, have no worries; those arborvitae branches will grow back as green and healthy as ever.

Perhaps the bigger issue is preventing the same type of damage from happening again!

How To Get Arborvitae To Fill In

The most common and effective way to get arborvitae to fill in is also the easiest: simply cut it back a bit.

Depending on the size of the tree/hedge and what part of it is in need of filling in, cut back anywhere from 12 inches to 24 inches of the arborvitae branches.

A pruning saw may be necessary to cut through the thickest of the lateral branches.

The Thuja Green Giant is one of the most basic evergreens to prune. Here are a few tips for you to get started:

Thuja Green Giants may benefit from different types of pruning, but, for the most part, they don’t actually need pruning, other than the removal of dead or diseased growth.

That said, it really depends on what you want to do with them.

For nice, neat hedgerows, at least one major pruning session is necessary as well as an additional annual trim every year after. On the other hand, naturally shaped Thuja doesn’t ever require pruning.

Hopefully, we answered all your questions about how and when to prune your Thuja Green Giants!