So you’ve heard about the healing powers of rice sprouts and plan on adding them to your diet.

Now you’re just searching for the right type of rice sprouts to grow and are curious about brown rice sprouts.

Can brown rice be sprouted? Brown rice can be sprouted by employing a rinsing and soaking cycle. Add rice to a jar with a sprouting screen, and fill with water. Drain and refill to rinse the rice. Fill with water again. After 12-16 hours, drain, rinse, and soak again. Repeat this process for several days until sprouts appear.

Read on below and learn everything you need to know to get started with sprouting brown rice!

Brown rice once sprouted is far healthier for us than standard brown rice. It’s loaded with healthy nutrients and helps dramatically boost our digestive systems.

That’s because once it is germinated, the level of basic nutrients, vitamins, amino acids, and minerals, increases dramatically.

Once brown rice is sprouted, you can eat it raw, as a side dish, or use it as a primary or secondary ingredient in countless foods/dishes.

But, first, you need to know why it’s so good for your health, how to sprout it, and other important information we discuss in the following sections of this guide!

Is Sprouted Brown Rice Good for You?

Sprouted brown rice is one of the best types of rice sprouts there are.

The sprouted version of brown rice is proven to be as much as four times healthier than the “normal” brown rice you’re used to eating.

Brown rice sprouts are higher in amino acids, vitamins, minerals, protein, and just about every other nutritious statistic than other forms of rice including the white kind.

Sprouted brown rice is particularly high in vitamin E and antioxidants, and it has fewer natural sugars than other rice types as well.

The full range of sprouted brown rice benefits is still being uncovered, but what we know so far is extremely impressive.

Brown rice is a whole grain with its hard and intolerable outer shell/hull removed. Compared to white rice, brown rice is much healthier as it has a bran layer and a cereal germ, which white rice lacks.

Sprouted brown rice is simply brown rice that has been hydrated and soaked for up to 16 hours or so.

Once germinated and sprouted, the rice becomes several times healthier than it was in its original form.

These sprouts are considered five to 10 times healthier than standard rice. 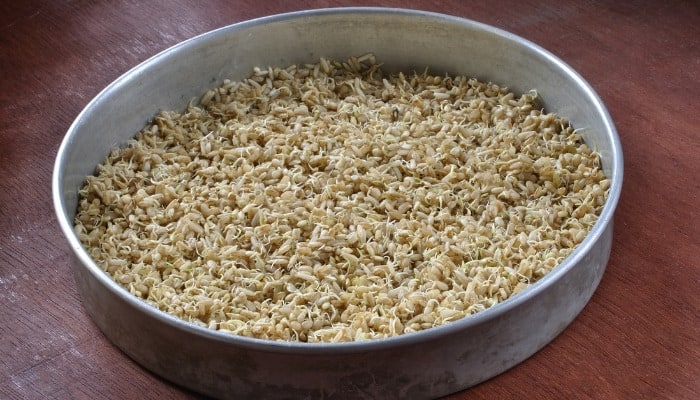 Does Sprouted Brown Rice Have Arsenic?

The quick answer is yes, brown rice does have arsenic. In fact, almost all rice has some amount of arsenic in it.

The arsenic is either already in the soil or is absorbed by the rice as pesticides and chemical fertilizers are applied to the crops.

It is believed that approximately 20% or so of the arsenic in rice may be removed by soaking it and draining it.

However, cooking the rice afterward goes even further to reduce the levels of arsenic, removing up to 80% of the toxin.

Is Sprouted Rice Easier To Digest?

Yes, sprouted rice is easier on the digestive system than normal rice. Sprouted grains nearly always contain much lower levels of starch than non-sprouted rice does.

They also have higher levels of enzymes that help the digestion process move along more smoothly than regular rice does.

Not surprisingly, sprouted brown rice tastes a whole lot like regular brown rice does. There is an even nuttier and slightly chewier taste and texture to it than normal brown rice has.

Some folks compare the taste to raisins and toasted almonds.

You can eat raw sprouted brown rice, though many people prefer further cooking it into a dish.

Mixing sprouted brown rice with other grains and cereals is also popular as is mixing it with quinoa and making stuffing.

All things considered, it is best practice to cook raw sprouted brown rice in order to neutralize any bacteria that may be present directly before eating it.

How Do You Cook Sprouted Brown Rice?

Cooking sprouted brown rice is quick and easy in a medium-size saucepan:

Of course, the above example is a basic one. There are countless ways to cook and prepare sprouted brown rice!

How Long Does It Take Brown Rice To Sprout?

Generally speaking, it takes around 2 to 3 days for brown rice to sprout. During this 48 to 72 hour period, the rice needs rinsing and draining in 12 to 16 hour intervals.

In Japan, researchers have shown brown rice may be germinated/sprouted in as little as 16 hours.

How long will it take you to sprout your own brown rice? Only time and practice can tell!

How Do You Know Sprouted Brown Rice Is Ready?

After two to three days, tiny little sprouts will have formed on the brown rice, and the rice is ready to be used and enjoyed.

Keep in mind that these sprouts are practically microscopic compared to the sort of sprouts you’re used to seeing garden variety seeds/plants start from.

While rinsing and draining your brown rice, keep an extra watchful eye after the first two days passes. You might not notice them if you aren’t actively looking for them.

Deciding to learn how to sprout brown rice may be one of the healthiest/beneficial choices you make in your entire lifetime (depending on your current diet!).

Once you’ve made your mind up to try sprouting brown rice, all there is left to do is get busy with it. The steps are easy to follow:

Keep in mind that while most brown rice sprouts in 2 to 3 days if handled properly, there may be some reason that yours takes an extra day or two.

Likewise, it could even sprout early. That’s why you want to keep a really close eye on the rice while draining and rinsing. As soon as you notice the tiny little sprouts, it is ready!

Brown rice can indeed be sprouted, and it is, in fact, several times healthier than normal brown rice.

Hopefully, our guide answers all of your questions and teaches you everything you need to know about sprouting brown rice!