From the wild mountainous regions of Siberia to the gardens of St. Petersburg, Russia is brimming with bold and beautiful varieties of flora – many of which are flower bed favorites here in the US.

Get reacquainted with these 21 stunning Russian blooms, plus learn their symbolism, history, and more. 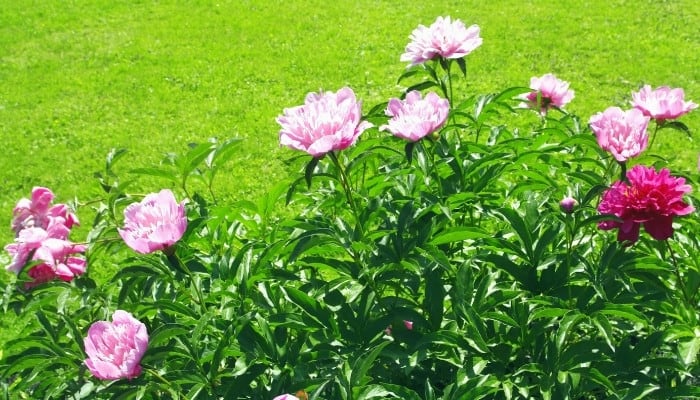 Peonies are customarily given as 12th wedding anniversary gifts due to their symbolic ties to honor and good fortune.

They have also become synonymous with compassion as according to Greek legend, physician to the gods Paeon healed Pluto with a peony root.

The scarlet-red fernleaf peony found in Russia’s Caucasus Mountains is now considered endangered due to over-harvesting and will prosper in a well-draining clay or sandy soil. 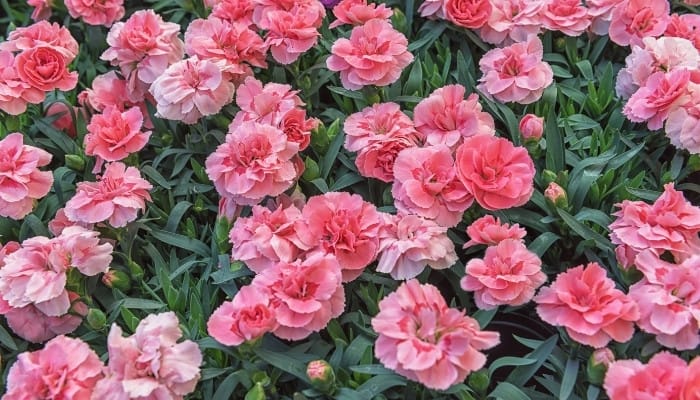 Russians believe that placing white carnations under your pillow will leave you inspired the following morning.

Red carnations meanwhile are known as “revolution flowers” and were worn on the badges of Bolshevik party members during the 1917 revolution.

Encourage strong growth in your garden carnations with 20-10-20 fertilizer to deliver balanced micronutrients. 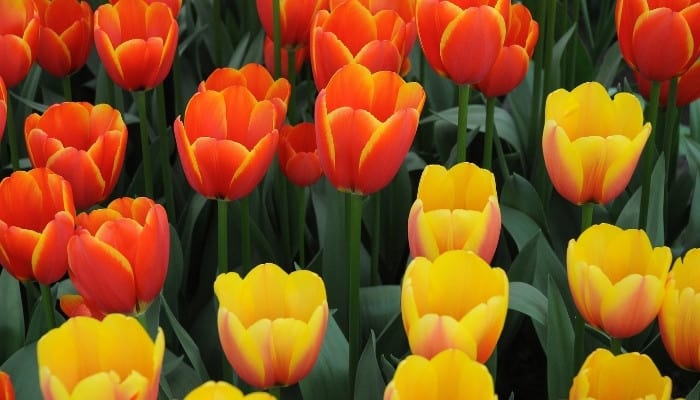 Peter the Great is credited with introducing tulips to Russia following his trip to Holland in 1698.

Today, a beloved Russian variety is the Shrenck’s tulip growing in the Southeast. It thrives in loamy soil due to its excellent moisture retention.

Tulips hold different meanings in Russian culture depending on the color – yellow, for instance, denotes sadness (there is even a popular break-up song called “Yellow Tulips”). 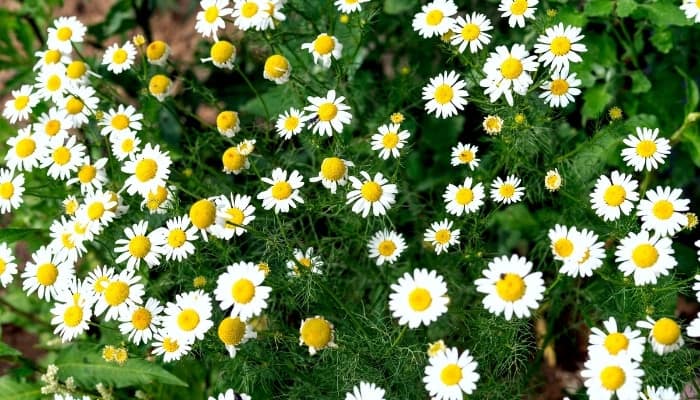 Russia’s national flower since 1998, chamomile has been in medicinal use for thousands of years and is still cherished today due to its sleep-inducing and anti-inflammatory qualities.

These delicate flowers symbolize peace and dream-fulfillment, and its name derives from the Greek and Latin name khamaimēlon meaning “earth apple.” 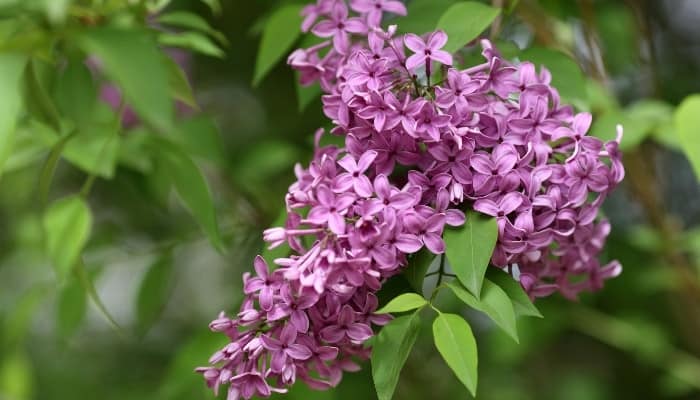 Native to the Balkan peninsula, lilacs delight with a welcoming rose-vanilla fragrance and have come to represent purity, innocence, and trust in many cultures.

Lilacs hold a few superstitions for Russians, such as placing a lilac twig on the chest of a newborn to impart wisdom.

Another is to eat the petals of a five-petal lilac as four is the common number, so extra petals supposedly bring good luck if they are consumed. 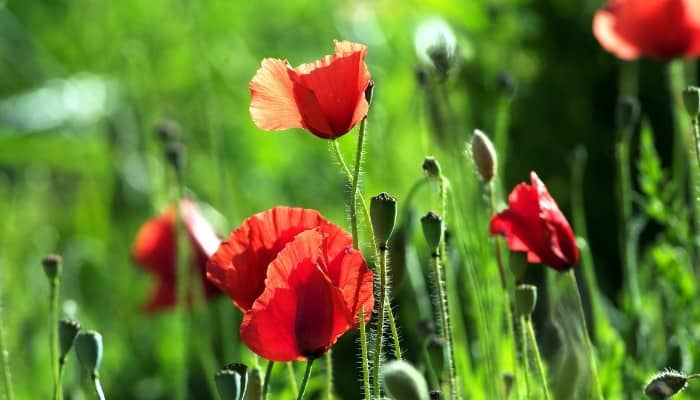 Though poppy flowers generally represent remembrance, in Russia they also symbolize both weakness and happiness.

Poppies are discouraged as romantic flowers due to their soft fragile petals which resemble “fleeting love.”

Contrarily, poppy seed is often consumed at traditional Russian weddings as this is said to bring the new couple happiness! 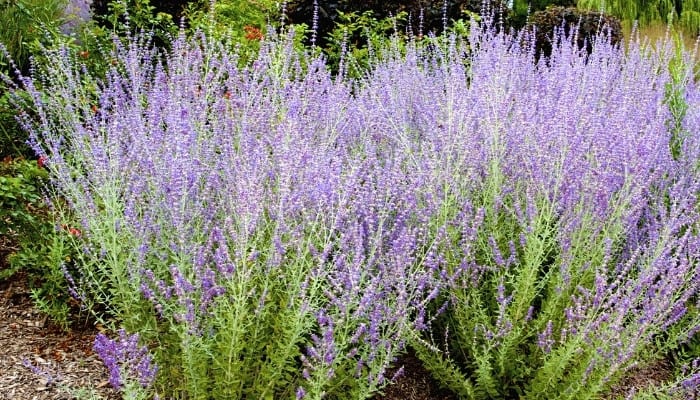 Named in 1840 to honor Orenburg governor B. A Perovski, Russian sage is a tough, drought-tolerant plant, and its hardy nature has led to it symbolizing success and strength of character.

It is often presented during graduation ceremonies for this reason. 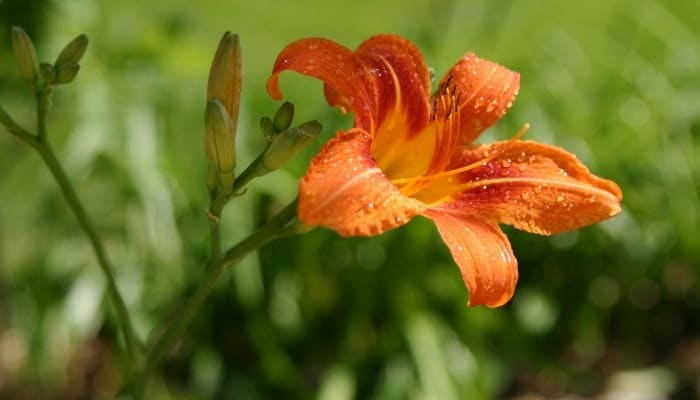 Lilies have been linked to purity and motherhood due to the Greek myth that the goddess Hera (wife of Zeus) observed lily flowers blooming from her breast milk.

Consequently, many women and brides of Ancient Greece wore a crown of lilies.

Russia is home to boldly colored species such as tiger lily, though white lily varieties are associated with death in Russian culture and are often used as sympathy or funeral flowers. 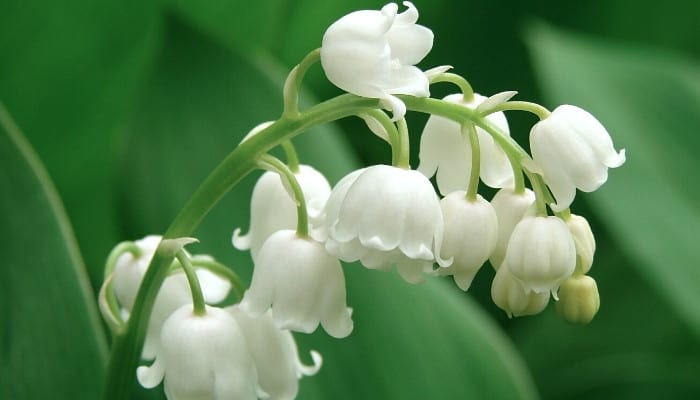 With their early blooming and pure-white coloring, lily of the valley is said to symbolize Christ’s second coming and was also received by King Charles IX as a token of luck in 1561, which became a yearly tradition.

According to Russian folklore, this low-maintenance flower is said to grant wishes and predict fortune with the plucking of each petal representing an “It will/won’t come true” pattern. 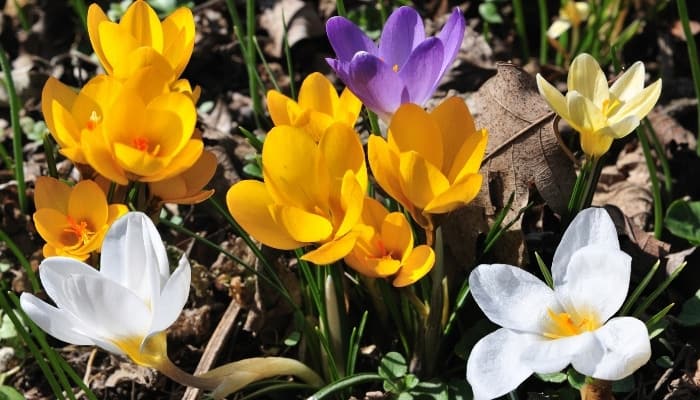 Rebirth and romantic devotion have become synonymous with crocus flowers due to their early blooming and lively colors – particularly the violet and orange blossoms found in southern Russia.

The name crocus is thought to originate in Greek mythology in which a mortal man of the same name developed an unrequited love for a nymph and died of sadness, transforming into a flower.

To prevent overwhelming your crocus blooms, only apply a slow-release fertilizer (this one is excellent) during fall. 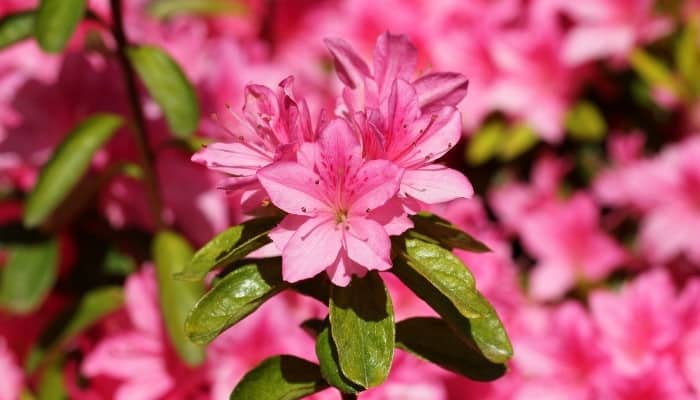 The name azalea derives from the Greek word meaning “dry” as they don’t like wet soil.

The plant’s love of a moderate climate is also reflected in its meaning during the Victorian era – that the gift of azaleas communicated temperance and prudence.

Throughout Asia, azaleas are symbolic of pensiveness and joy, depending on the color varieties. Azaleas grow best in slightly acidic soil, so add an inch or two of peat moss during planting. 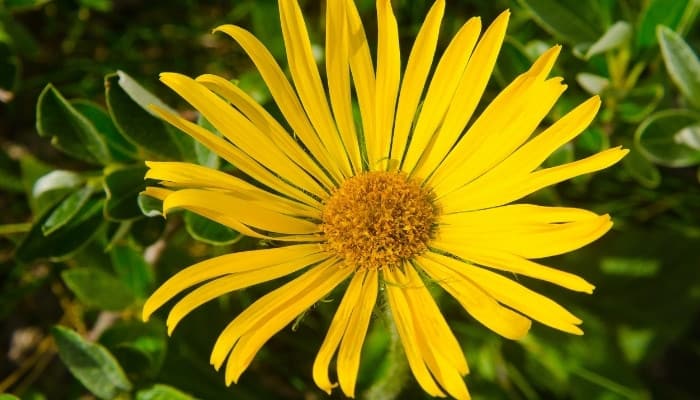 Indigenous to south-eastern Russia, the arnica flower derives its name from the Greek word arnakis meaning “lamb skin” due to its fleecy sepals.

Arnica root has been used to treat inflammation since the Middle Ages – first appearing in a 1558 herbal remedy volume by Italian doctor Pietro Mattioli.

Arnicas have come to symbolize protection due to their far-reaching medicinal use and behave like a wild herb, only requiring watering in a drought. 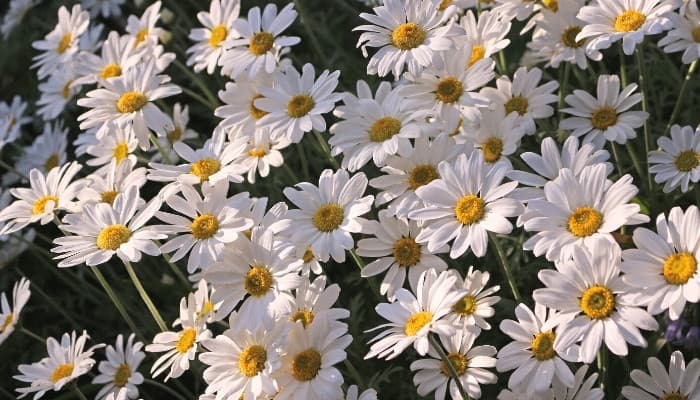 The humble daisy derives its name from the Old English term “day’s eye” as the petals open and close with the arrival of dawn and nightfall.

A bouquet of daisies traditionally symbolizes friendship and honesty, and in Russia, The Day of St. Peter and St. Fevronia or “The Day of Family” is marked by sharing daisies. 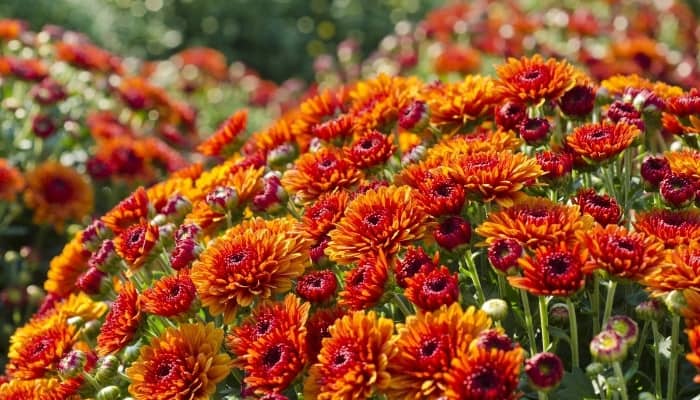 Their texture and color variety has made chrysanthemums popular worldwide, but in Russia all-white arrangements of the flower signify honor and loyalty.

In fact, schoolchildren traditionally give their teachers white chrysanthemums on the first day of school.

Be sure to support their developing flower heads and prevent distorted foliage by staking bamboo canes next to each flower. 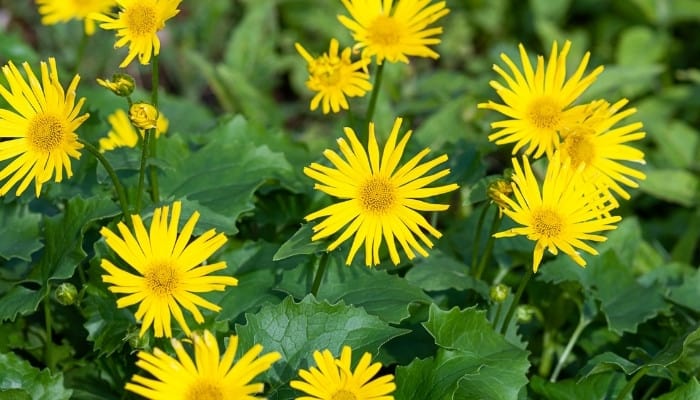 Somewhere between a daisy and a sunflower, this medicinal herb is also named wolf’s bane since its entire plant genus was once considered poisonous to animals.

The roots of leopard’s bane were traditionally used in homeopathy to treat skin ailments.

Through a combination of their medicinal use and hardy nature, this flower has come to symbolize strength and resilience. 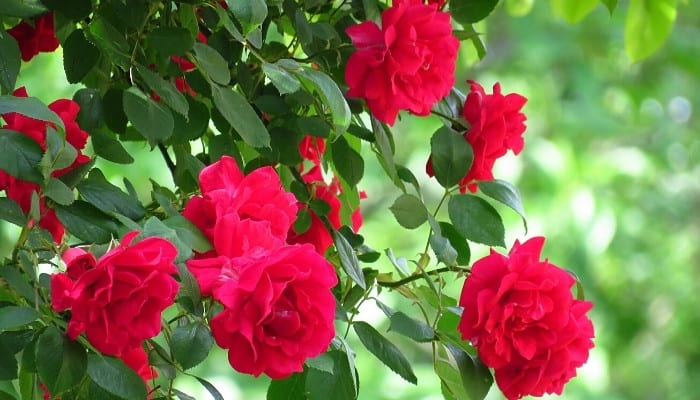 Roses classically signify love and passion, but within Russian culture, meanings can differ depending on the color and quantity of roses!

Firstly, only even-numbered bouquets are reserved for funerals, so other occasion roses must be odd. 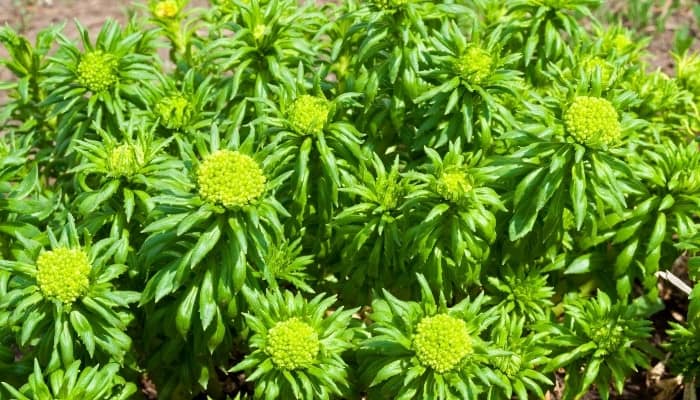 Found in the mountain regions of Siberia, the rare golden root flower contains anti-inflammatory properties and has been used for centuries to treat stress, anemia, and depression.

It is also named Aaron’s rod in reference to Moses’ brother whose shepherd’s staff also possessed miraculous powers and budded with golden flowers during the plagues of Egypt. 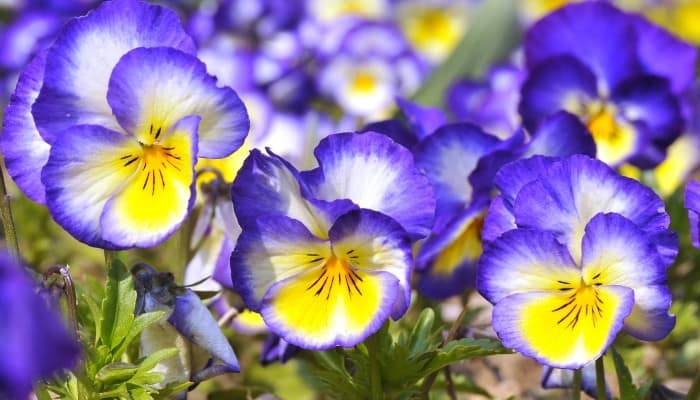 The bold color combos of the common viola flower is said to represent nostalgia and happiness, while Greek mythology references the expressive “faces” of violas turning towards the nymph Io in consolation after being transformed into a flower by a jealous Queen Juno.

Prolong their blooming period by dead-heading faded violas and water the soil more lightly during summer to prevent waterlogging. 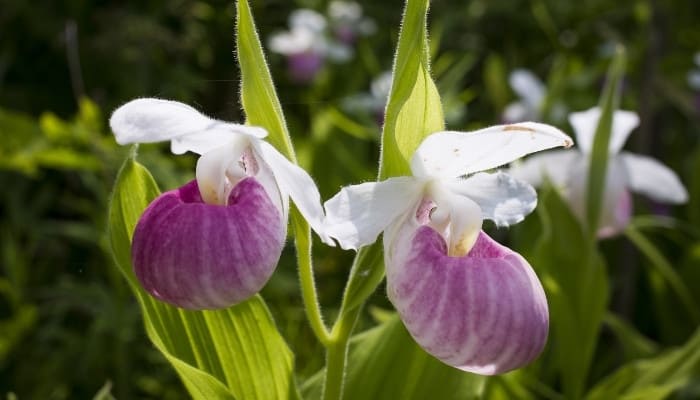 Orchids share many meanings for different cultures throughout history.

The Aztecs believed drinking orchid extract gave them super strength while both Ancient Greece and modern-day China view them as tokens of fertility and good fortune.

Orchids appreciate moderate humidity, so water them in the evening during summer to slow evaporation in the daytime heat. 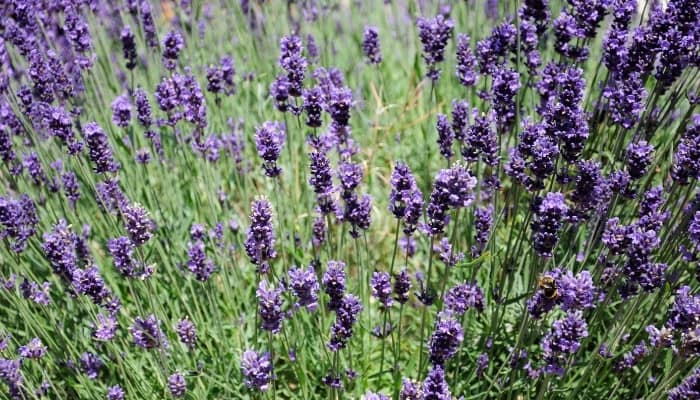 Despite lavender being introduced to the Nikitsky Botanical Garden in Crimea in 1812, the popular aromatic flower did not gain popularity in Russia until 1930 when it became industrialized.

From Ancient Egypt to Christianity, lavender’s therapeutic, cleansing properties have led it to symbolize healing, serenity, and purity.

Mary was said to have anointed Jesus’ feet with lavender flower while Ancient Egyptians were embalmed with lavender oil during mummification. 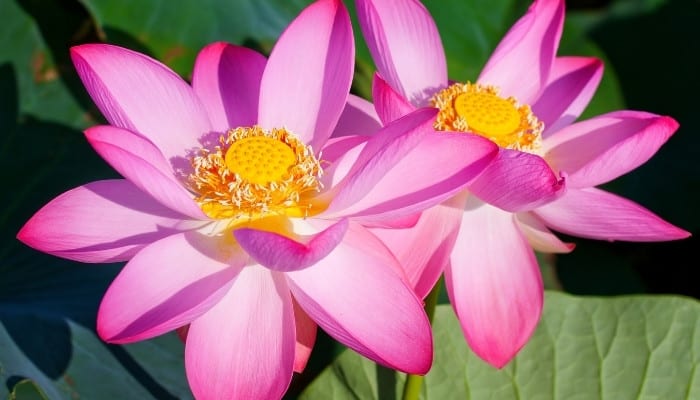 Found throughout western and far-eastern Russia, the grand Russian lotus flower has been under protected status since the late 1970s.

Like many lotus blooms around the world, the Russian lotus is symbolic of compassion, enlightenment, and rebirth. Plant this 4-foot tall aquatic plant in a pond or water container more than 6 feet wide.

To summarize, Russia is also home to many beloved garden flower varieties grown in the US, with many carrying a strong political or romantic significance throughout the country’s rich history.

A handful of the above flowers are super hardy and resilient to even Russia’s coldest regions while others require a more watchful eye when it comes to their ideal humidity and soil needs.