The Rose of Jericho is a plant straight out of antiquity. It is known for drying out and “dying” and then coming back to life and thriving once again.

What do you do with a Rose of Jericho? Rose of Jericho is a plant that has many uses and varies greatly from other plants. You may use it for medicine, tea, decorations, or for spiritual purposes. To grow it, simply rehydrate it in water and anchor it in a container with water or in quick-draining soil.

Below you’ll discover everything you need to know about Rose of Jericho, including how to use it, care for it, revive it, and more.

Be sure to read all the way to the end to view an amazing time-lapse of the plant’s revival.

The Rose of Jericho is an herb that was used in ancient times throughout the world to treat various ailments including pain, to induce labor, to soothe menstrual cramps, and more.

It was used widely as traditional medicine and is still used in alternative medicine today.

What Is a Rose of Jericho?

The Rose of Jericho is known by many other names. A few of the most well-known alternative names for the plant include:

The Rose of Jericho is a relatively small plant, and when you first get your hands on one it looks like nothing more than a dried-up ball of mud and roots.

It is an extremely hardy plant, surviving in conditions that easily kill other plants (like weeks with no water).

Anastatica hierochuntica is the name of the “true” Rose of Jericho. In its natural environment, the flowering plant grows to heights of around 1 foot tall.

When there isn’t enough water to support the plant, it contorts itself into a ball (and looks a lot like one of those tumbleweeds from an old western movie).

Once the True Rose of Jericho receives water, it stops hibernating and comes back to life.

The plant Selaginella lepidophylla, originating from the Chihuahuan Desert in the United States and Mexico, looks and acts similar to Anastatica hierochuntica and is sometimes mistaken for and therefore called Rose of Jericho.

A more common and accurate name for it is the “False” Rose of Jericho.

The traditional uses of Rose of Jericho could take up an entire article (if not a full book).

Unfortunately, we’ll never know exactly how many uses it had in ancient times or for just how long our ancestors relied on it as a multipurpose medicine.

Modern scientists vouch for the Rose of Jericho’s ability to improve general well-being and sleep quality, reduce blood pressure, and relieve some symptoms in cancer patients, as well as additional medicinal and therapeutic benefits.

Below, we discuss the medicinal, religious, spiritual, and decorative uses of the Rose of Jericho in better detail.

Rose of Jericho was (and still is in various places around the world) used traditionally in numerous cultures for treating all manners of health conditions.

Aside from the medicinal purposes already mentioned above, the plant was also used for treating such common ailments as arthritis pain, asthma, and the common cold.

Perhaps one of its most important roles as an ancient medicine was to induce (force) labor.

The full extent of the Rose of Jericho’s religious and spiritual uses is unknown.

We do know that it was viewed as a “resurrection plant” and was thought to have transformational and renewal powers to people of many spiritual belief systems.

A few of the main faiths that Rose of Jericho certainly played a religious role in include Christianity, Hoodoo, and Santeria.

In most cases, the herb’s leaves, flowers, and seeds are dried and used for tea, or it is prepared as oil for making holy water.

The Rose of Jericho has a natural and rustic decorative appeal to it. Its appearance is somewhat reminiscent of a pinecone as they were used as traditional Christmas decorations.

It is unclear exactly how else our ancestors may have used this plant for decorative purposes.

It takes no stretch of the imagination to envision a curled-up Rose of Jericho on the old stone hearth, the altar of the ancient household.

Today, this fascinating plant is commonly used for decorative purposes as it differs significantly from ordinary houseplants. 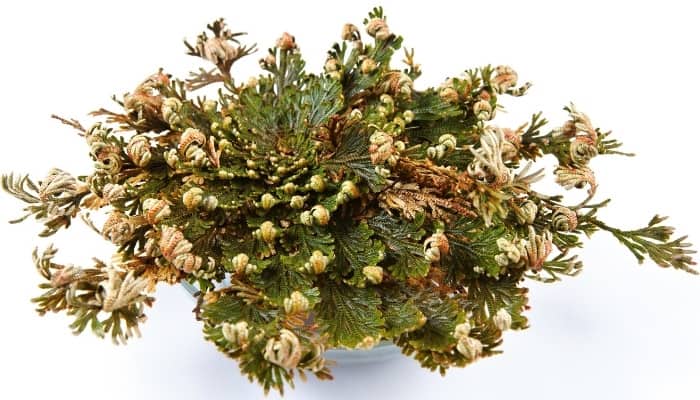 In the next few subsections, we discuss each aspect of caring for Rose of Jericho.

Note that the directions given apply to the Selaginella lepidophylla, or False Rose of Jericho, as they are much more common, and if you have a Rose of Jericho, it is likely the “false” version.

Depending on how you plan on displaying your Rose of Jericho, you have two main options to choose from before you even get started; planting in water or planting in soil.

If planting in water, you can simply stick it into a container of water with its roots touching the surface of the water.

Adding pebbles to the mix is a great way to keep the plant stable, depending on the type of container you’re using (and the amount of water it is holding).

If you are planting your Rose of Jericho in soil, know that you’re taking the road less travelled. The plant doesn’t require soil, and it is much easier to do without it.

However, if you absolutely must plant it in soil, make sure it is sandy, coarse, and extremely fast draining.

When you’re finished, place the “planted” Rose of Jericho in a calm location with lots of bright but indirect light.

Rose of Jericho is a touchy plant when it comes to water.

It can go long periods of time without water, but once it is growing actively, a lack of constant water is almost as bad as being overwatered (which leads to the plant rotting).

The proper watering routine for Rose of Jericho may seem a bit peculiar, but it is well practiced and proven.

Water your plant daily, but skip one day each week. Every two weeks, skip an entire week of watering so the soil dries out completely.

If keeping your plant in water rather than soil, simply keep the water topped off and remove the plant for a few days (up to a week) every couple of weeks or so.

How Much Water Does a Rose of Jericho Need?

Depending on how you’re growing and caring for it, a Rose of Jericho should be watered until the soil is completely saturated and water is leaking from the bottom of the pot.

The topsoil should be thoroughly wet for several inches deep.

If your Rose of Jericho is growing in water, the tips of the roots should be fully submerged in the water at all times.

Keep in mind that you’ll need to change the water out with fresh water every 14 to 21 days. Adding a tad bit of general-purpose liquid nutrients (you can find them here) also helps the plant thrive.

How Long Do You Leave a Rose of Jericho in Water?

Rose of Jericho can be grown in water indefinitely so long as you remove it to dry out from time to time.

That said, if you’re planning on planting the Rose of Jericho, you’ll need to let it soak for about 5 to 10 days before removing it from the water.

False Rose of Jericho can go directly into the soil after just 24 to 48 hours soaking in water. That’s because they form new roots rather than grow back from the old ones (like True Rose of Jericho does).

Light & Temperature for Rose of Jericho

The recommended light and temperatures for Rose of Jericho are much more forgiving than with many similar plants.

Rose of Jericho survives with as little as 1 to 3 hours of direct sunlight each day. It thrives in temperatures as low as 40°F to as high as 95°F.

Revival of a Rose of Jericho is quite simple; allow the plant to dry out, and then place it in a shallow container of water (with its roots covered).

Expose it to plenty of indirect light as well as an hour or two of direct sunlight daily (when possible).

How Long Does It Take for a Rose of Jericho To Turn Green?

According to most reports, Rose of Jericho may begin to unfurl itself and turn green in as little as 3 to 4 hours after being reintroduced to a water source.

Make sure to change the water every day or two to make sure that it continues turning greener.

Is Rose of Jericho Alive?

Rose or Jericho is alive even when it is curled up into what appears to be a ball of dried-up and dead roots.

The plant simply hibernates until it senses enough water to “revive” and bring it out of its dormant phase and back into a vegetative state of growth.

Does the Rose of Jericho Bloom?

The Rose of Jericho is a member of the blooming mustard family, and after it is in a vegetative growth phase for a long enough period of time, it does indeed bloom.

After it is fully healthy and has established some greenery, it begins producing little white blooming flowers.

Do Rose of Jericho Grow?

The Rose of Jericho is alive and growing just like any other plant, albeit it functions a bit differently than most. That said, the maximum size for most of these plants is 12 inches tall.

How Long Can a Rose of Jericho Last? 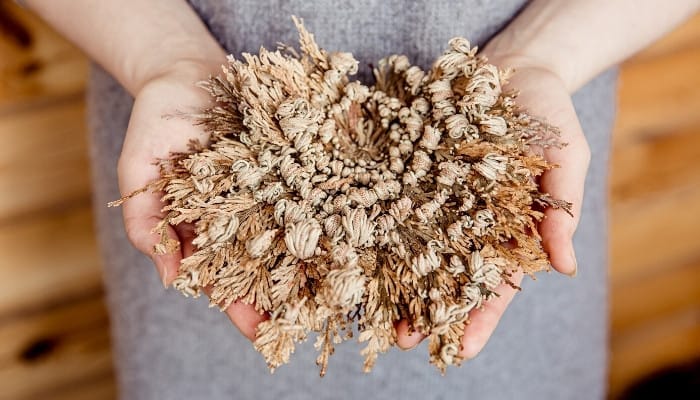 The lifespan of a Rose of Jericho depends largely upon the care it receives during its lifetime.

That said, the plant can go for up to 7 long years with absolutely no water, losing up to 95% of its moisture before it is in danger of dying.

Does the Rose of Jericho Need Sunlight?

While it’s growing Rose of Jericho needs light just like any other plant. In this case, the plant requires between 1 and 3 hours of direct sunlight or a larger amount of bright indirect light.

While curled up into a ball in between growth stages (when it is hibernating), the Rose of Jericho requires zero light. In this state, the dry plant can go for years without receiving as much as a particle of sunlight.

How Much Does a Rose of Jericho Cost?

Depending on the species, the vendor, and other basic factors, such as quality and age, determine the cost of a Rose of Jericho.

Many listings offer Rose of Jericho for $5 to $15. Others offer many higher-end versions with price tags between $50 and well over $1,000.

Is Rose of Jericho Toxic?

Rose of Jericho is commonly used as medicine, usually as tea. It is not toxic to people if ingested.

It may cause irritation to cats, however. So, try to avoid placing them on the floor or other areas your cats frequent.

Is Rose of Jericho a Tumbleweed?

Believe it or not, Rose of Jericho is actually indeed a tumbleweed.

Coming from desert regions, in nature these plants dry up and roll around sometimes for years until they find a place to nestle down and soak up some water.

How To Remove Mold From a Rose of Jericho?

The easiest and most common way to remove mold from a Rose of Jericho is to apply baking soda to the areas of the plant that are infected with mold.

Make sure to remove the excess baking soda as too much of the substance may harm your plant rather than simply kill the mold.

A Final Word About Rose of Jericho

Rose of Jericho is definitely a different type of plant. It can live for years on end without water, it begins to revive itself within hours of finding a water source, and it has a diverse number of uses.

Aside from being somewhat “strange” compared to normal houseplants, Rose of Jericho is certainly easy enough to grow!