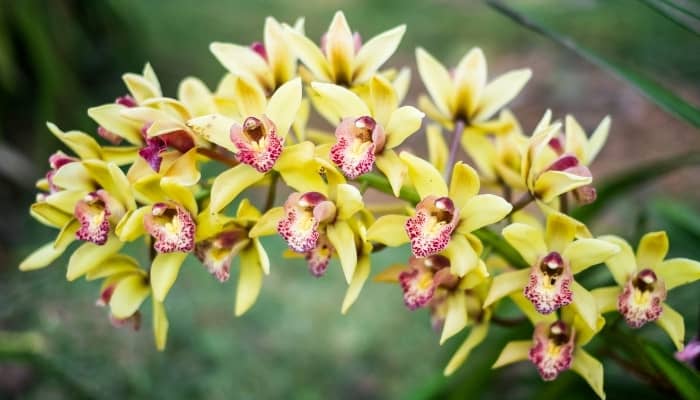 With their happy colors and delicate grace, orchids instantly brighten up any dull space in the home – but there are graceful and there are downright weird orchid species.

From the jaw-droppingly expensive to those resembling animals and others capable of growing underground (yep, you read that correctly!), these are the strangest orchids you’ll ever see!

A post shared by Petals Of The World (@petalflow)

A man-made marvel, this unique flower was cultivated for over eight years in a lab by agricultural scientists of the Shenzhen University in Guangdong and remains one of the most expensive flowers ever sold.

It features large light green petals and a patterned white and purple lip.

There are fewer than 50 of this orchid remaining in a fenced-off area in its wild habitat of Mount Kinabalu in northern Borneo.

It has an eye-catching gold-and-burgundy pinstripe design in its four petals, two of which are narrow and horizontal, and has a deep crimson and yellow pouch-like lip.

This eerie but beautiful orchid lacks foliage of any kind and grows from a dull-green stem that blends into its dark swamp marsh and tree habitat, leaving its slender beaming white petals and longer front tendrils appearing as if they’re floating in mid-air!

With its population isolated to a volcanic ridge on the Azorean island of São Jorge in Portugal, this remarkable flower has been dubbed “Europe’s rarest ever orchid.”

It features broad dark-green leaves at the base of a single flower spike that teems with small white and light-green petals resembling butterfly wings.

A stunning hybrid of P. rothschildianum and P. hsinying maru, the “stealth” orchid owes its enigmatic name to its dramatically dark wine-hue petals that are almost black.

This dark shade covers the central lip entirely and most of its three upper petals, while the lowest petals hint at the parental pinstripe pattern.

This astonishing parasitic orchid resides in the outback of Western Australia and grows (and blooms) below ground by drawing nutrients from the fungi living in the bush roots!

It features over a hundred crimson and cream flowers inside blush-pink petals and uses its strong scent to draw pollinating ants.

A bird’s-eye view of this stunning Japanese-native orchid reveals the shape of the white egret bird in flight.

In a brilliant feat of nature, this European orchid found from Ireland to Spain and Romania resembles a common fly perched on light green petals!

Its long lip is reddish brown and hairy with a silver-white middle resembling folded wings and a pair of brown “antennas.”

The central lip meanwhile is dark purple with a splash of white. Its bright colors often beacon cheated pollinators hoping to find nectar!

This quirky orchid found in parts of Peru and south-eastern Ecuador smells sweetly of ripe orange when in blossom, but the most intriguing feature is that its four slender curled sepals hang down like the long limbs of a monkey.

At the top of its white and lilac-dipped “limbs” is a head-shaped lip!

Found in the wetlands of the American Midwest, this quaint and pretty orchid grows on tall grass-like stalks and produces around 40 pristine white flowers measuring about 1 inch across.

Each flower has a white domed hood and two pairs of deeply fringed upper and lower petals.

This critically-endangered orchid is the rarest orchid species in Hawaii and features small yellowish-green flower petals growing from bright-green egg-shaped leaves on a tall tubular stalk.

This eye-catching orchid has its sepals, petals, and lip aligned to resemble a miniature duck in flight!

The Australian-native flower features large pink or purple central “body” petals with two narrow vertical petals for the wings and a curved front lip with a lighter-colored tip for the duck’s beak!

Deep in the swamps and woodlands of North America lies this bright and unusually shaped orchid.

A deep buttercup-yellow pouch – akin to a lady’s ballet slipper – sits below three pinstriped maroon and light-green petals which are slightly coiled, looking like the slipper’s ribbon ties.

This joyous orchid hails from Tasmania and is named “Sun” as its azure-blue petals can only be coaxed open in the direct warmth of the sun.

Around six star-shaped flowers grow from a single dark-green stem and produce sky-blue outer petals with a yellow and white inner lip.

The intricate detail on this strange orchid fools insects and humans.

The velvety yellow and deep-burgundy pattern on its pendulous lip appears to be a female bee taking nectar from the pale pink petals, and it even emits the scent of a female bee to attract nearby males!

This cute, friendly looking orchid takes on the guise of a happy, sleeping owl once it’s in full bloom!

Its broad base petal is splashed with burgundy “feathers” and topped with a yellow-and-brown lip “beak” while the trio of deep-pink petals above paint the face with detailed red markings for the eyes.

Hiding in the swamps and meadowlands of North America is this touch of royalty.

This orchid bears the same deep pouch and petal shaping of the Yellow Lady’s Slipper but in a demure mauve-pink which contrasts beautifully with its bright-white petals and ridged deep-green leaves.

From afar this teensy pink-and-purple orchid appears as pleasing and dainty as any other common orchid, but a closer inspection reveals a frightful devil’s face staring back at you with glowing yellow eyes!

The translucent pink striped petals aren’t much cozier either as the ends are claw-sharp.

This strange and exceptional orchid can be found in only three areas of the Sky Islands in Arizona and grows beneath the ground by collecting nutrients from the roots of nearby shrubs and trees!

Its flowers bloom above the surface, however, displaying deep purple petals that recurve like ribbons.

Found in the swamps of North America and parts of Canada, this showy orchid grows tall on a single grass-like stem and produces a bright pink-purple flower with three slender top petals and a protruding purple-and-white mottled lip with a yellow “fire-breathing” center.

The bizarre petals on this Australian-native orchid are thought to resemble the head of a goat when observed straight on (especially when the flower “nods”).

Atop its tall stem are four white-and-crimson dashed petals, the lateral pair of which sit horizontally for the ears while the central hood and broad lip reflect the face.

Found in Western Australia, this pretty pale-yellow orchid resembles its namesake in petal form and character due to its high tolerance for warm and often harsh conditions.

Seated above its protruding hood and lip with a crimson marking is a pair of perfectly ear-shaped petals.

Each of the above orchids are a breathtaking sight for any collection, but many are sadly endangered due to increasing popularity and deforestation.

Before you take home one of these unicorn flowers, get the expert low-down on basic orchid care and start from there.