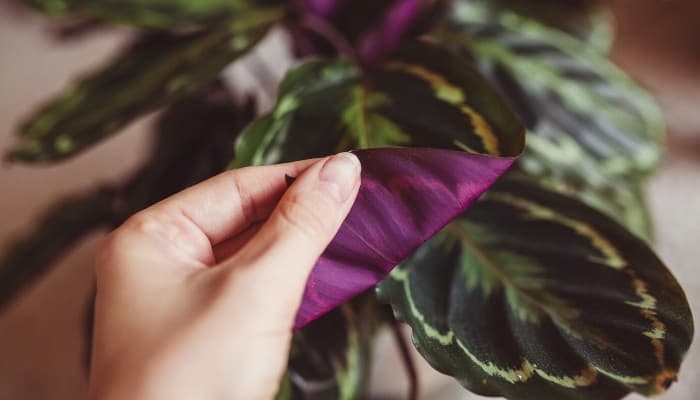 Calathea is a beginner-friendly tropical plant that takes little attention once established. It’s quite popular with folks who’re looking for beautiful but easy-to-care-for indoor houseplants.

In the following you’ll discover the top 10 rare Calathea plants and growing tips for each.

With so many Calathea plants available, it can be hard to choose the right one, especially if you are looking for one of the rare, hard-to-find, and unusual ones.

Below, we list our picks for the top 10 rare and unusual Calathea plants: 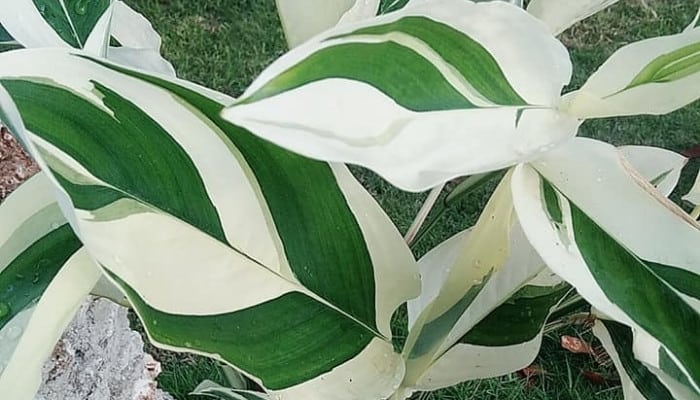 The Calathea ‘White Fusion’ is an easy to care for evergreen perennial, but it’s a tricky-to-find rare variety of Calathea.

Humidity must be relatively high, and underwatering mustn’t occur if you want to keep these guys happy. At full maturity, they may reach heights of around 24 inches.

They are most noticeable for their green-and-white variegated leaves.

Bright, indirect sunlight will help the plant thrive and maintain leaf patterning, but direct light should be avoided.

At full maturity, Calathea fucata reaches heights of 2-3 feet and 1-2 feet in width. The flowers are white, yellow, and purple. Keep this plant in well-draining soil in bright but indirect light. 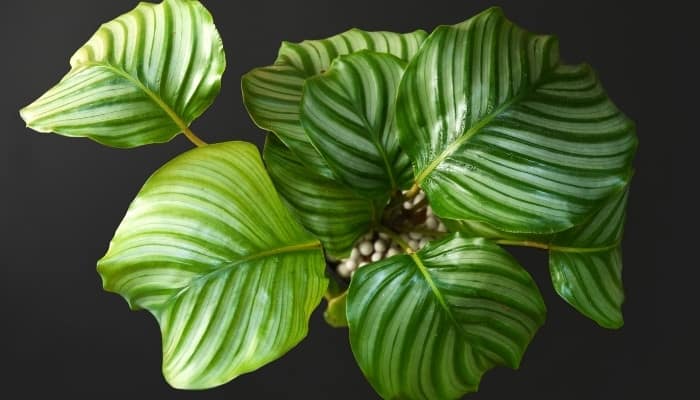 Calathea orbifolia, or South American prayer plant, is a larger variety of Calathea that looks great in pots.

The species grows up to approximately 36 inches in height and up to 20 inches or more in width.

They thrive in well-draining soil and tolerate lighting conditions from low light to bright, indirect sunlight.

Aesthetically they are a pleasing two-tone green color with round leaves that are striped with lighter and darker hues of green. 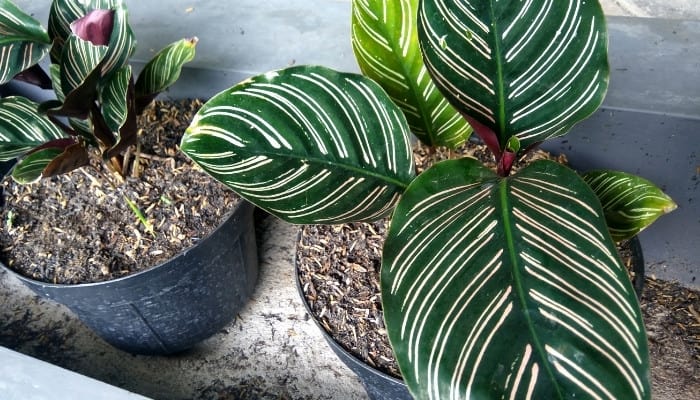 The Calathea ornata is a rarer variety than most. It’s easy enough to take care of, but you may find it hard to get your hands on one.

If you do, keep it moist and humid and in indirect sunlight or low to medium indoor light.

The appearance of Calathea ornata is rather stunning; some are slender and others bushy, but they all share long green leaves with silvery-white and green stripes on the front and reddish-purple on the back. 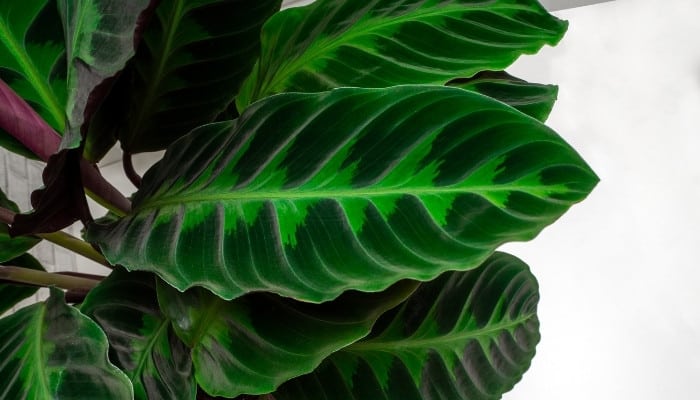 The Calathea jungle velvet, or botanically, Calathea warscewiczii, is yet another rare species. The variety requires quick-draining soil that consists of rich organic matter.

Keep it moist but avoid over or underwatering. Expose it to bright light but never direct sunlight.

Like a few of the rarer species of Calathea, the jungle velvet has white and sometimes silverish stripes on the front of thick green leaves and a violet color on the undersides.

The white jade variety of Calathea is a large variety that does exceptionally well outdoors in indirect but bright sunlight.

They stand out from other varieites of Calathea with their large green leaves that may have a pinkish undertone. They are also known to produce brilliant pink flowers.

The flamestar Calathea, a variety of Calathea veitchiana, is an outstanding cultivar.

As the name suggests, this variety can have yellow-tinted leaves or even orange-red tinted leaves in the rarest cases but usually is a combination of lime and dark green with ornate design around the margins.

As with most Calathea, they need a lot of bright light but will shrivel up and wither away quickly if exposed to direct sunlight.

They also require a decent amount of humidity and do not like to dry out, but they’ll also suffer from being overwatered. 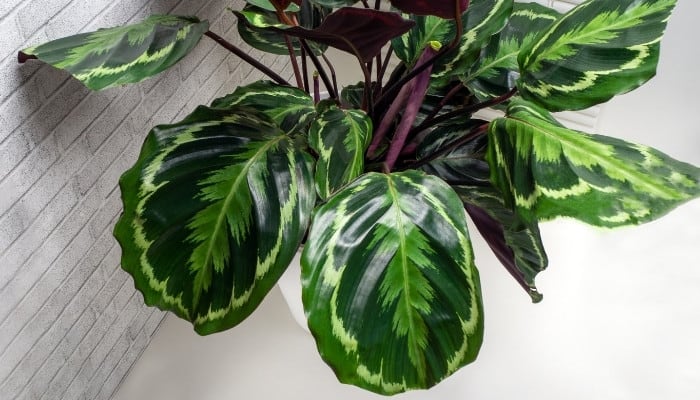 The rose painted Calathea, or the Calathea rosepicta, is a genuinely stunning variety of Calathea plants.

The rarest species of roseopicta have white and green leaves that eventually take on a pinkish rose-colored hue on the front side of the leaves.

They require the same basic lighting, watering, and humidity needs as the other Calatheas on this list.

Keep them moist and out of the direct sun, mist them often, and regulate the temperature around them and they will thrive! 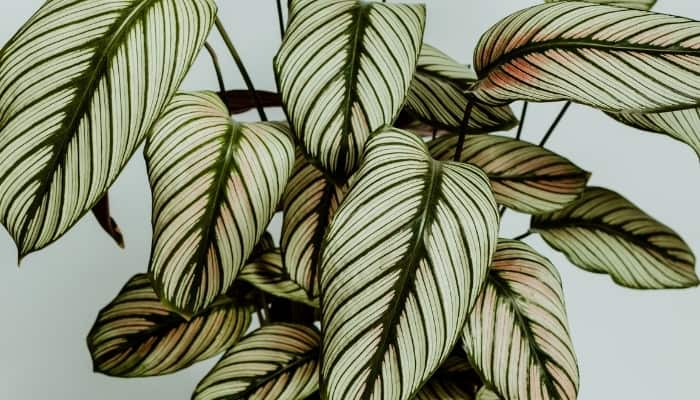 The white star Calathea, also known botanically as the Calathea majestica ‘White Star’, is one of the most unique of all Calathea species.

The leaves of the white star are much large than many Calathea species and are predominantly white, rather than green.

For the best results, avoid putting these guys in the direct sunlight, keep their soil well-fertilized, and don’t let them dry out!

Be sure to read our complete care guide for this plant to be sure it thrives.

Perhaps the rarest-looking of all the varieties on our list, is the Calathea pavaonii, or red star Calathea. It has one of the most dramatically different leaf patterns of all Calathea.

The leaves are large and similar to other species, but rather than stripes they have splotches, diamonds, or square-type shapes instead.

Are Calathea and Marantas the Same?

Calathea and Marantas both belong to the arrowroot family of plants, but they are not the same and are a different genus entirely. Even though both plants tend to be labeled as “prayer plants”, this is not correct.

Calatheas are not true prayer plants. Marantas are genuine prayer plants, getting their name from the way that their leaves fold up during the night.

Is Calathea Good for Beginners?

Calatheas are great plants for beginners. They take very little attention once they adapt to their environment and thrive in indirect light.

Another reason they are popular with beginners is that they are available in so many interesting-looking varieties.

Searching for the rarest looking Calathea plants is a challenge, but once you understand the different species and what to look for, the quest to find the perfect plant because a bit easier.

Hopefully, with the 10 rare Calatheas listed above, you’re able to find the exact Calathea you are looking for!