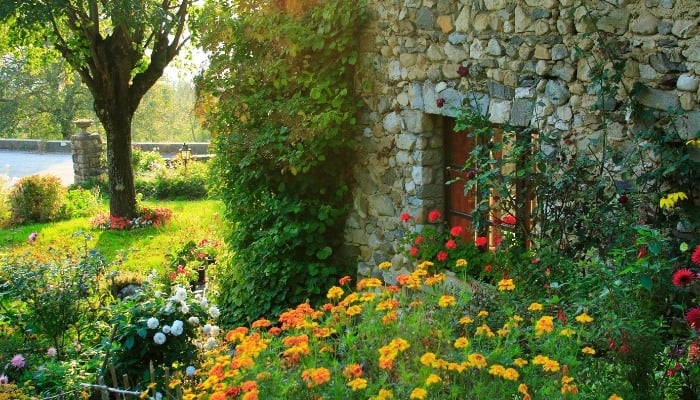 Alongside fine dining and world-class style, France is also famed for its stunning selection of native flowers.

From daring, passionate colors to delicate hues and textures, each of the following blooms would look très romantique in your garden!

With its rich, heady scent, French lavender has been cultivated by chefs and perfumers for centuries and will thrive when lightly watered to prevent fungal issues.

Lavender is symbolic of purity due to its association with the Virgin Mary, and its historical aromatherapy uses have also led it to signify grace and spirituality.

For centuries, irises were depicted in the ancient Royal Family emblem, causing much debate about France’s true national flower.

Iris’ name originates from the Greek goddess Iris meaning “rainbow,” which is fitting due to its wide color spectrum. Dividing your irises every 3-5 years is recommended to prevent crowding.

Lilies have long been associated with fertility and prosperity, but they were also famously featured on the French crown and in classical decoration during the monarchy.

The decorative emblem is named the Fluer-de-lis (lily flower).

Lilies only bloom once a year, so enjoy them at their best by planting them in raised beds and peat moss soil to encourage excellent drainage.

Poppies symbolize remembrance and sacrifice in honor of fallen soldiers during WWI, and the tradition of wearing one was initiated by the French humanitarian Anna A Guérin during her post-war charity work.

Water your garden poppies once weekly to encourage healthy blooms, and maintain a weed-free bed to ensure incoming blooms won’t be competing for nutrients.

These elegant bellflowers grow in the Gourdon region and can be found brimming over walls throughout Paris. They’ll grow best in well-draining soil, so add horticultural grit to the compost.

Also known as Campanula, these drooping flowers historically represent humility in Christianity due to St. Dominic who viewed clothes and shoes as luxuries and hung his head in piousness.

These flamboyant beauties are members of the sunflower family (Asteraceae) and were named by 18th-century botanist Traugott Gerber.

They are prone to disease in crowded conditions, so plant them 12-18 inches apart. (Find more growing tips here.)

Gerbera daisies were thought to have grown in the temple gardens of Ancient Egypt as a sign of sun devotion while Celtic legend equated them with joy in times of hardship.

The iconic rose has become a popular fixture in French culture ever since Empress Josephine kept a rose garden consisting of 250 varieties!

They soon became a fashion statement in the French court, symbolizing grace and admiration.

Remove rose suckers (long slender growth at the base of the stem) regularly to maintain healthy blooms.

Daffodils are the worldwide sign that spring has sprung, making it a symbol of hope in France and representative of cancer awareness in Britain and the US.

According to Greek legend, daffodils often grow near streams due to the myth of Narcissus, son of the river god who became so enamored by his reflection that he drowned.

Nasturtium flowers are said to represent loyalty and patriotism and are grown in French restaurants for their use in sweet and savory dishes.

Its name derives from the Latin word ‘nasus’ meaning nose referencing its tart scent! If you grow them for admiration only, keep the soil perpetually moist to encourage gorgeous blooms.

Found across northern France, these stunning flowers hang in a bell-like pendant of purple and pale pink.

According to The Complete Language of Flowers, the ‘Rose of Castile’ is said to represent bashful love and inspiration.

These flowers are best cared for in a fertile soil medium – nutrient-rich loamy soil is best.

Each year in France on May 1st, lilies of the valley are often exchanged as part of a tradition dating back to 1561 when King Charles IX received them as a token of luck – kickstarting May Day as French citizens know it today.

As this flower has a habit of overtaking its area, plant them in containers or raised beds to prevent them from overwhelming nearby plants.

The Wisteria flower has come to symbolize fertility and immortality due to its incredible lifespan – particularly in Japanese culture where a 150-year-old wisteria tree still stands!

You’ll find these stunning climbing vines adorning many a shop front and garden wall in France.

As they are heavy in weight and fast growers, be sure to prune back wilted blooms regularly and remove branches in winter.

The town of Grasse – the world perfume industry – is teeming with this sweetly scented beauty.

Jasmine derives its name from the Persian name Yasmin meaning “gift from God” and has come to symbolize warmth and positivity.

Boost your jasmine’s flower power with high-potassium fertilizer, like this one, and support their growth with a trellis or fence structure as they have weak trunks.

The French flower breeder Victor Lemoine and his wife can be credited with introducing these purple stunners to the country in the 1870s. By 1950, their grandson’s efforts had established over 200 varieties.

Lilacs have long been a symbol of spirituality and tranquility due to their short blooming time encouraging reflection and an appreciation for life’s beauty.

A rainbow bunch of hyacinths may seem romantic, but they are actually associated with jealousy and sorrow due to Greek mythology.

The French would use them for intoxication by spraying a bouquet with poison and placing them in the victim’s boudoir.

Help prevent taller varieties of hyacinth flower from going floppy with support stakes or plant them closely together for natural support.

France became gripped by tulip mania in the 1500s after explorer Pierre Belon returned from Turkey with a collection of rouge red tulips.

The country became so besotted that it’s even thought that a miller once traded his livelihood for a single tulip bulb!

Ever since, these flowers have become associated with romance, especially deep-red varieties that signal undying love.

Symbolic of love and fertility, the bright and bold petals of pansy flowers were used by the Ancient Greeks to create “love potions.”

According to herbal folklore, their heart-shaped form meant they could ease a broken heart.

For best results with your garden pansies, make the soil as fertile as possible by adding leaf mold or composted bark before planting.

Also known as the “herb of the sun,” marigolds are symbolic of passion and prosperity due to their warm, golden tones.

Conversely in Mexican culture, they’re also linked to grief and are traditionally used during “Dia de La Muertos” to guide souls to their altars.

According to folklore, these sweet, iconic flowers possessed magic powers and signified new love and innocence, which is thought to explain why nervous maidens throughout Europe practiced love divination chanting “He loves me/loves me not.”

Use a support stake to help leggier varieties stay upright, and try to divide your daisies every 2-3 years to promote improved flowering.

Chrysanthemums have historically represented joy and rebirth – particularly in Japanese culture since they hold a sacred “Festival of Happiness” every year in the flower’s honor.

Reduce weeds near your chrysanthemums by adding a thick layer of mulch to the soil. This will also help lock in moisture.

La Source Parfume in Gourdon is famed for its woody-scented rosemary variety, which is adored by perfumers and culinary artists.

Historically, dried sprigs of rosemary were used to embalm the dead in medieval France, leading them to represent remembrance and memory.

These grow best in containers, preferably with polystyrene peanuts added to the bottom to improve drainage.

The Cours Saleya flower market in Nice is home to stunning varieties of cacti bearing rose-pink blooms among the thorns, and best of all – they need very little maintenance!

In Native American culture, the gift of a cacti plant represents protection and motherly love due to their strength in the harshest conditions, while the art of Feng Shui believes a terrace placement will banish negative energy from your home.

Synonymous with Christmas décor, poinsettia flowers were originally cultivated by the Aztecs who created red dye out of the flower bracts for their bright clothing.

They also saw it as a symbol of peace which led to its modern western meaning of goodwill.

Poinsettias can be enjoyed year-round when potted indoors over winter and given a monthly feed of low-nitrogen, high-potassium fertilizer.

Depending on their color, orchids denote various meanings from sensuality (pink) to eternal hope (blue) and innocence (white).

Parisians can enjoy every color at the Jardin des Plants exhibition that celebrates over 1,000 orchid varieties!

Garden orchids will perform better in lighter, sand-based soil and should be fertilized sparingly due to the damaging salts.

To sum up, these sensational French flowers can be home-grown with minimal fuss and will prosper when given the space and ideal soil medium to ensure weeds and moisture-induced rot won’t deter them.