Alternatively known as the Coin Leaf or Peperomia Owl Eye, this adorable, pint-sized plant has thick, shiny leaves of deep green shaped like fat raindrops, making a gorgeous statement on your windowsill or bookcase.

How do you take care of Peperomia Raindrops? Peperomia Raindrop plants require high humidity, well-draining substrate, and bright, filtered light to mimic their native Columbian rainforest environment. It will thrive in average household temperatures of 65-80°F and must be allowed to dry between waterings as it is highly drought tolerant.

Did you know that Peperomia Raindrops are epiphytes, meaning they normally grow on the surface of trees or other plants instead of in soil?

We’ll detail how this translates to their soil needs plus other aspects of their care, how to propagate them, FAQs, and more.

Getting To Know the Peperomia Raindrop

Despite its tropical background, the Peperomia polybotrya or Peperomia Raindrop is hardy to life as an indoor or outdoor plant, and its compact size makes it ideal for tight spaces!

Let’s look at the basic facts before answering common questions…

Peperomia Raindrop at a Glance

According to the online plant nursery Candy Floriculture, this plant is “rare in some areas and abundant in others” as it’s prized for its quirky foliage.

You may find some Raindrop plants retailing between $10 and $50-60 depending on where you visit.

The fact that 2022 has been declared the “Year of the Peperomia” by the National Garden Bureau may also play a part in its perceived rarity and value, not to mention the recent houseplant trends and skyrocketing popularity.

These odd-looking blooms produce a lightly sweet smell, but it’s best to remove them if your plant produces a lot to redirect energy into the stunning foliage.

No, according to the ASPCA, plants in the Peperomia genus are considered nontoxic and pet friendly.

Take care to keep your plant away from pets or young children, however, since consumption of the foliage in large quantities may result in vomiting or stomach issues.

How Big Does a Raindrop Peperomia Get?

Typically, Raindrop Peperomias won’t grow much larger than 1 foot (about 15 inches) with a mature spread/width of around 8-12 inches.

This makes them ideal for small apartments on windowsills, balconies, or as part of indoor/outdoor container gardens.

Are Raindrop Peperomia Hard To Care For?

No, like most Peperomias, Raindrop Peperomias are often touted as great beginner plants since they are drought tolerant and hardy to a wide range of climates and conditions.

It can be easy to overwater them if you’re unfamiliar with succulent-like plants, leading to poor foliage and soil health if improper care persists.

When To Water Peperomia Raindrop?

They should be watered once every 2 weeks during spring and summer as the foliage has excellent water-storing capability and can cope with periods of drought.

Water your Raindrop plant less often throughout fall/winter (every 3-4 weeks) when it can’t absorb water as efficiently.

Is Peperomia Polybotrya a Succulent?

They are classified as semi-succulent since they require well-draining substrate and possess thick, fleshy leaves and meaty stems that are able to store water.

Unlike true succulents, however, P. polybotrya doesn’t originate from a dry climate with little humidity or rainfall (quite the opposite!) and technically belongs to the pepper plant family.

Though similar-looking, Pilea or Pilea peperomioides plants belong to a separate classification than Peperomia Raindrops.

Secondly, Pilea peperomioides (also known as Chinese Money Plant) are native to China, specifically at the foot of the Himalayas while Peperomia Raindrops are found in Columbia and Peru.

Another telling difference is that Pilea peperomioides bears foliage on a single, woody stem in the center, while Peperomia Raindrop leaves grow from multiple fleshy green stems.

Plants labeled Peperomia Owl Eye are Peperomia Raindrops – this is simply another nickname given to them alongside Coin Leaf plant.

All Peperomia Raindrops have generally deep- or dark-green leaves with a white spot or translucent “eye” in the upper middle portion, which is where the stem beneath attaches to the leaf – resembling a small Owl’s eye in the “face” of the broad leaf.

Is Peperomia Raindrop the Same as Chinese Money Plant?

No, Chinese Money Plants (Pilea peperomioides) are often confused for Peperomia Raindrops due to their similar foliage shape.

The Chinese Money Plant is a flowering plant belonging to the nettle family.

Both plants grow to a similar mature height of around 12 inches, but Chinese Money Plants feature a central brownish-green woody stem and more rounded leaves.

Why Are My Peperomia Raindrop Leaves Curling?

As Peperomia Raindrops develop, natural downward leaf curling can occur, giving the leaves a dome-like shape, but this normally resolves itself once plants mature (around 8 months).

Leaf curling can also be a sign that your plant is underwatered, exposed to too much sunlight, or suffering from low humidity. 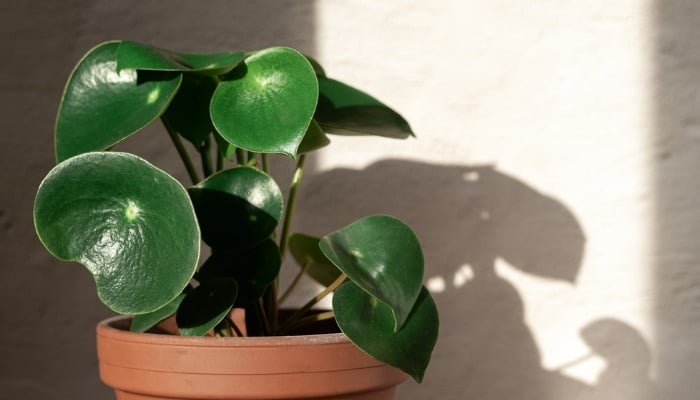 While Peperomia Raindrops are fairly low maintenance, they still have a preferred environment that will help them prosper in your care.

Let’s take a look at their needs – everything from their soil to their watering schedule.

Pick a well-draining soil, like African Violet mix (this one is excellent), or make your own.

Houseplant expert Julie from Sprouts & Stems advises mixing 50% general indoor potting soil with 50% perlite/pumice with orchid bark thrown in – “this loose, chunky mixture helps with aeration and drainage and closely resembles their native substrate in the cracks of trees and rocks.”

Use a terracotta pot with 2-3 drainage holes to encourage fast drainage and quicker water evaporation.

Raindrops prefer the bright, indirect light of a north- or east-facing window or at least 6 feet away from a south-facing window to prevent scorched foliage.

In very dim environments, it will become leggy and stretched, however, so it may be worth investing in a grow light, like this fully adjustable free-standing light.

Ideal temperatures are between 65-80°F, which is the average range in most homes.

Just be sure to keep it out of windowsills once cooler fall temperatures arrive, and be wary of nearby AC units/drafts.

As for humidity, keep it around 60%+ to replicate its balmy jungle environment.

Use a humidifier or commit to misting every other day with filtered/distilled water, using a hygrometer to help you stay on track.

The “drench and drain” method is best, advises long-established Nick’s Garden Center based in Aurora, Colorado.

Once every 2 weeks in spring/summer, place your pot under running water to fully soak the potting mix, and allow the water to drain fully from the drainage holes.

It’s important to then allow the soil mix to become bone dry before the next watering, so check the top inches of soil with your finger to ensure it is not still moist.

It could dry after a week or longer depending on your environment, so you’ll come to estimate its ideal watering routine.

Once monthly during its spring and summer growing season, you can encourage your Peperomia Raindrop with a balanced liquid houseplant fertilizer, diluted to half-strength.

Refrain from fertilizing during winter when plant growth slows.

Pruning isn’t essential for this plant, but you can deal with leggy, unattractive growth from a lack of sunlight and create a bushier-looking plant with a few well-placed trims.

Using clean pruning shears, prune off any long, unruly vines with few leaves or prune a specific leaf by making your cut just above a growth node to prevent disease and trigger lush new growth.

You’ll know it’s time when the plant has considerably outgrown its pot or the roots are protruding through the drainage holes.

When appropriate, transfer your Raindrop into a pot one size up (at least 2 inches) from its current one.

Also, take great care to gently loosen the old soil mix around the roots as they are quite weak compared to most houseplants. Repotting shortly after watering can make things easier!

You can create baby Peperomia Raindrop plants by propagating stem cuttings in either soil or water, or you can propagate from leaf cuttings.

Stem cuttings in soil is probably the simplest, most direct method:

Allow 2-3 months for roots to develop. Gently tug the plant after 2 months – if there’s resistance, the roots have established well!

In case you’re wondering about leaf-cutting propagation, here’s a video that explains it all.

In less-than-ideal conditions, your Peperomia Raindrop plant may be visited by a few pests or run into a disease:

Natural insecticides like neem oil can keep these at bay.

When overwatered, stagnant water on the leaves can lead to leaf spot (brown/black lesions) while root rot can commonly occur when plants are left in waterlogged soil.

Pruning badly affected leaves/roots and treating the plant with organic fungicide can remedy disease in its early stages.

Preventing environmental stressors like poor humidity or temperature extremes can help too.

To sum up, Peperomia Raindrops are compact tropical plants with distinctive broad and fleshy glossy leaves (which often have them confused with the Chinese Money Plant).

They need high humidity and chunky, well-draining potting mix to thrive, and their thick, water-retaining leaves mean it’s often better to underwater than overwater these cute and quirky plants.