They all share a similar appearance with bright-green delicately shaped leaves with dark stripes or spots on them.

They aren’t the hardest plants to care for, but there are several common causes for your maidenhair fern to begin dying off.

Read on below and discover the 15 most likely causes that your maidenhair fern isn’t doing so well.

The most common reason why your maidenhair fern is dying is that it may have insufficient water. Maidenhair ferns need watering every 5 to 10 days depending on the environment.

If you’ve watered it too little, you will need to cut the plant off at the ground level, move it into a shady area, and thoroughly water it until it starts new shoots.

The second most common reason that your maidenhair fern might be dying is that it may have been exposed to too much light for too long.

Keep in mind that in nature, the ferns are typically on the forest floor covered with tons of shade and receiving only partial sunlight.

That means growing them indoors requires a space that only receives indirect sunlight. Avoid direct sunlight by all means, otherwise you are signing your fern’s death warrant.

As mentioned above, this particular type of fern only needs partial sunlight. Anything brighter or more direct than indirect sunlight is too much.

(Not sure what exactly is the difference between indirect and direct light? We explain it in simple terms here.)

In the same breath, too much shade is a sure way to kill your maidenhair fern as well.

For that reason, keep it in an area that receives a few hours of sunlight per day (or use a plant light like this one with five different brightness levels). 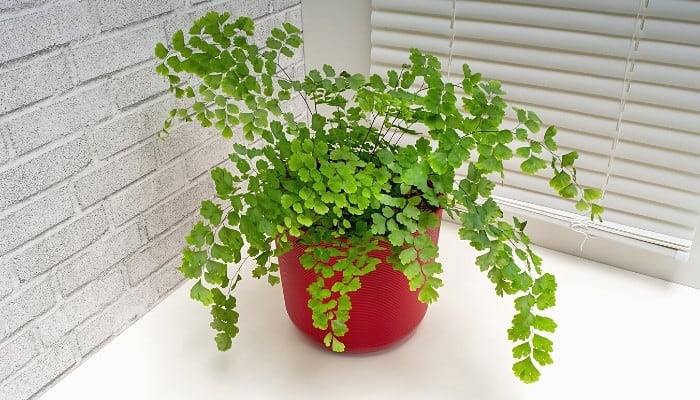 Maidenhair ferns need a humidity level of 50% or slightly higher. If the humidity level is constantly dropping below 50, your plant is going to have serious problems. It may even die.

If you believe your plant is suffering from low humidity, replant it in a terrarium or install a misting humidifier near the plant.

I recommend this ultra-quiet humidifier with a nozzle that rotates 360° so that you can aim the cool mist directly at the fern.

Simply keeping the soil moist and the temperature correct as well as misting it often may be enough to manage the humidity level, but if the plant is still struggling, go with a humidifier.

If you’ve been watering your plant more often than once per week or so, it is more than likely receiving way too much water. These ferns do best with waterings roughly every 7 days.

If your plant has received too much water, you may need to repot it with new soil. If so, consider a self-watering pot (find it here on Amazon) or one with excellent drainage.

Additionally, you may consider installing a moisture meter, like this easy-read hydrometer.

That way there is no more guessing involved with your watering schedule for the fern. Simply glance at the dial gauge and know whether it’s time to water or not.

Unlike many house plants, the maidenhair fern is not one that requires much fertilizer. In fact, you may get away with fertilizing it as little as three or four times a year with 50% diluted fertilizer.

If you are growing your fern in the correct type of soil, you will need even less fertilizer for your plant to thrive. Once or twice per year may be more than enough fertilization for this tough little plant.

The maidenhair fern needs a rich and organic type of soil that drains very well. The best mixture includes either some sort of moss and plenty of organic compost (learn to easily make your own here).

That way the soil is both nutrient rich and retains plenty of water in between waterings.

If your plant is dying due to poor soil, the only thing to do is to repot it right away. Afterward, give it extra attention for a couple of weeks and it should be restored.

If not, you’ll need to prune it back to the ground and allow it to re-shoot.

If your plant is exposed to temperatures in the 80s or 90s for too long it will die without a doubt.

On the opposite end of the spectrum from dying because of temperatures that are too high, your fern may also be dying due to too low temperatures.

Again, the ideal temperature is roughly 70°F degrees. If your maidenhair fern is left in temperatures of less than 60°F, however, it will begin dying after only a short time.

Maidenhair fern requires repotting from time to time as they grow; otherwise they may become rootbound in their pots. It is best practice to repot them every spring.

If your maidenhair fern seems to be dying and everything else is being cared for properly, it is a good bet that your plant is already rootbound.

If so, you must repot the fern immediately in a larger container with fresh soil.

Root rot, unfortunately, can occur with almost any plant that is overwatered or has a poor drainage system. Plastic pots also contribute to root rot more than other materials due to higher levels of water retention.

To cure root rot on your fern, you will need to repot it in fresh soil, but first, you’ll need to knock all the soggy dirt off the roots and prune away the yellow, brown, and black parts of the roots.

Leave only white roots when you repot it.

As with most any houseplant, the maidenhair fern is not exempt from pests. If pests are left unchecked, heavy infestation will lead your plant straight into an early grave.

Aphids, scale, and mealybugs are among the most common pests that may affect your fern.

Unfortunately, if your plant is already dying due to these pests, you’ll more than likely need to cut it all the way down to the ground or even repot it.

The most common diseases that are typically associated with the maidenhair fern are leaf spot, root rot, blight, powdery mildew, and rust.

Each disease on its own is bad enough to severely cripple or even kill your fern.

Together, they spell sure death for your plant. Unless you take quick action and properly treat the disease early on, you’re going to need to restart your fern from scratch.

One of the most overlooked causes that may be killing your maidenhair fern is a drafty location.

While these ferns don’t mind a bit of a draft for the fresh air, if it is lower than 65°F, you’re entering the danger zone.

Move your plant immediately and keep a thermometer near it to help avoid the situation again in the future.

Last but not least, if you’ve looked over every possible cause for your plant’s possible demise and nothing seems to fit, you could be using the wrong type or size of planting container.

For optimal results, plant your fern in a self-watering pot. Also, make sure that the root ball has plenty of room to expand.

If your maidenhair fern is dying, one of the 15 likely causes listed above is probably the culprit. Take your time and work through each possibility.

Hopefully, by the time you have explored each likely cause, you will have found the problem (and solution) for your fern! Refer back to this article as often as you need while diagnosing and rejuvenating your fern!