Forget landscape paintings, plantscaping is the wall art of the future – specifically moss wall art that ranks among the top design trends of 2022.

But there’s a big difference between a moss frame you pick out at Target and a living moss wall – so how does the latter work?

How do living moss walls work? Most living moss walls require little maintenance as they do not contain live moss, consisting instead of moss that has been preserved with glycerin to extend its lifespan. Fully live moss walls, however, require daily misting or a hydroponic irrigation system to sustain them, depending on the scale.

Essentially, a moss wall can be as “living” as your environment, budget, and patience allows.

Not sure where to begin? We’ve got the low-down on living moss walls from making your own indoor display to the pros/cons, and much more.

Living Moss Wall – What To Know

There is no definitive type of living moss wall – the one you create may be made entirely from live moss or none at all. Let’s break down the whats, whys, and challenges of a living moss wall.

What Is a Living Moss Wall?

This is an interior or exterior wall decorated with either live moss (fully hydrated and still in a growing phase), preserved moss (dead and dehydrated), or a combination of both.

Moss can either attach to a full wall or be placed inside frames of various sizes.

Living moss walls are made up of a living organism that requires access to natural light, frequent misting, and a regular watering system, making them more costly and difficult to maintain.

For this reason, these are better suited to exterior brick walls.

A preserved moss wall, meanwhile, is real moss that been treated beforehand with preservatives and dyes to retain its vibrant green appearance and can last for many years with little maintenance.

How Long Will a Living Moss Wall Last?

“In theory, living moss walls can live for around 25 years,” shares Landscape designer and owner of Artisan Moss Erin Kinsey.

However, this would require the rigorous maintenance of an unfaltering nutrient-water irrigation system or misting regimen to replicate its perpetually moist forest floor environment.

Best Types of Moss for a Living Moss Wall

Sheet moss is favored the most as it creates a smooth wall blanket and can be combined with others to add varied textures and shade.

For best results you may want to select a moss type based on your microclimate (shady, sunny etc.).

A living moss wall is a commitment.

Full wall designs are permanent, heavy structures since live moss holds up to 10 times its weight in moisture, so you must ensure your chosen interior/exterior wall can take the weight.

Also, the need for constant running water is expensive and can run the risk of leaks.

An exterior living moss wall is best if you want a design covered entirely in live moss as it has the advantage of natural light and rainwater to help it flourish.

Moss will fry and brown in direct sunlight, so a partially shady wall should be selected.

Also, consider that live moss walls will attract pests, so be prepared to apply pesticide or opt for a preserved moss wall as preservatives will deter most bugs.

You can use premade moss panels to cover large areas or the edges of raised garden beds. Alternatively, you can display live moss in various patterns and forms like this cute welcome sign!

An indoor moss wall will need to be placed in a low-light area and may require a hydroponics system – if you’re using 100% live moss – to deliver constant moisture and nutrients.

This mini self-watering moss wall below by SerpaDesign is an example of how you can create a portable moss wall to take from bedroom table to office desk!

Moss panels are sections of live moss grown on water-retaining capillary mats and typically come ready-to-mount on an interior or exterior wall.

This live sheet moss panel is great for decorating an interior wall and can easily be cut to size. Once mounted, it will simply need misting daily to stay in good shape.

Moss walls can also be housed in frames as live moss anchors itself onto any solid structure.

These can be large-scale flat boards made from wood or metal or chunky picture frames with a plywood backing, which looks especially eye-catching as it appears you’ve trained the moss into ovals, circles, stars, or any frame shape!

How To Create a Living Moss Wall 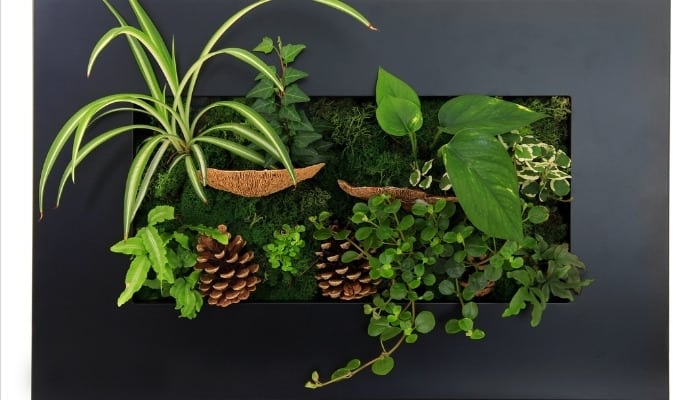 Sketch out the size, shape, and layout you want to help decide on your materials (frame, backing, hard-scape elements to add dimension etc.), and order some preserved and sustainably-harvested sheet moss.

Step 2 – Add Glue to Your Backing

Spread some glue evenly across your panel or frame (use masking tape around the edges of your frame to keep things neat). Floral glue is recommended for live moss as the regular stuff will kill it.

Place your moss pieces on the backing according to your design.

Gently prod the moss pieces with your finger to check they are securely glued down, and hang up your green new masterpiece!

How To Maintain a Living Moss Wall

From afar, plastic moss from the craft store has a similar appearance and texture to living moss with zero maintenance.

It is also cheaper, is more readily available, and comes in a wide range of colors.

If you prefer the real thing, you can either preserve the moss yourself or purchase pre-preserved moss.

It will only require dusting and can be dyed any shade you wish – just note that paler types, like Rreindeer moss, will absorb dye better, resulting in more intense pigmentation.

How Do You Preserve Moss for Crafts?

Remove any debris, and submerge the moss in a pan of boiling water to kill off bacteria. Let it dry on a paper towel.

Fill a bowl with 2 parts glycerin and 1 part methyl hydrate, and soak the moss for 10 minutes before gently squeezing the excess and leaving it to drain and dry out.

What Are the Best Plants for a Living Wall?

Living wall plants should be fairly compact and emphasize color, texture, and shape.

If you love the aesthetics of a green living wall but don’t fancy the fuss, a preserved moss wall is the way to go.

However if you’re prepared to maintain an air-purifying ecosystem in your own home, then living, breathing moss is the answer.

Either way, living moss walls inject a dose of nature into your surroundings and are simple to set up!