Looking for something a bit more sophisticated than manure to fertilize your garden with? If so, a product like Liqui-Dirt may be what you’re looking for.

What is Liqui-Dirt? Liqui-Dirt is an organically made plant food packed with vitamin and micro-fungi. It is beneficial to all garden variety crops, revitalizes soil, and boosts hydroponic systems. Furthermore, the product is 100% water soluble and absolutely safe to use around children and pets.

As you read through the following, you’ll find all of questions answered regarding Liqui-Dirt, so let’s get started without further ado.

Using Liqui-Dirt isn’t much different than using any of the water-soluble gardening products you already know and use, like liquid nutrients for hydroponic systems or plant food that you add to the watering can before you water your garden.

In the following sections, we’ll discuss what Liqui-Dirt is made of, what it’s used for, and many other answers to significantly related questions.

Technically speaking, a fertilizer is any substance that is used for making the soil more fertile. So, in that sense, Liqui-Dirt could be considered a fertilizer.

That said, it is not a basic fertilizer like manure. Rather, it is a complex mixture of organic ingredients that completely eliminates the need for traditional fertilizer.

What Is Liqui-Dirt Used For?

If you’re growing something in the dirt, chances are that you have more than one use for Liqui-Dirt, even if you don’t know it.

In addition to being used for revitalizing soil and boosting plant growth, Liqui-Dirt is also commonly used for: 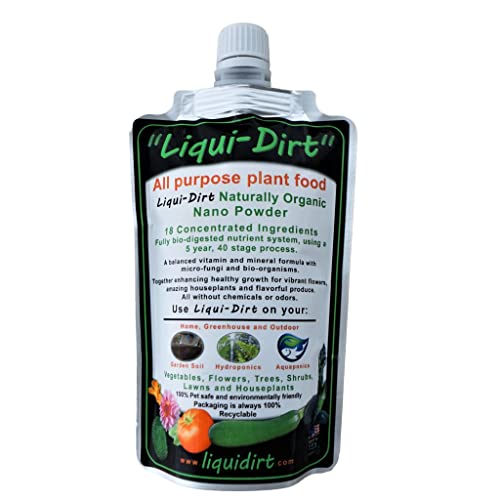 There are 18 main ingredients in Liqui-Dirt:

The manufacturer of Liqui-Dirt doesn’t list an NPK on the label. The product consists of all organic ingredients, each of which has a known NPK value if you really want to know.

However, due to the complex nature of Liqui-Dirt’s organic ingredient mixture, NPK values of each individual ingredient aren’t guaranteed.

Liqui-Dirt is indeed organic. Furthermore, the product consists of an easy-to-use nanopowder that’s 100% water soluble and takes no time to mix up.

In fact, Liqui-Dirt is considered one of the gold standard organic products for the revitalization of soil.

One cap of Liqui-Dirt nanopowder is 2 ounces, and that’s all you need to mix into each gallon of water you want to feed your soil with.

Simply dump the cap into your water container, add 1 gallon of water, shake or stir it up, and you’re ready to go.

If you need to, transfer the solution to an easier watering container before proceeding.

3. Apply Water to the Garden Soil or Soil of Houseplants

Go about your watering duties as you would normally. You don’t need to apply any extra water; the Liqui-Dirt will more than do its job.

4. Repeat the Process Every 2 Weeks

You may repeat the process of mixing and feeding your plants/soil with Liqui-Dirt every 2 weeks or so. One container lasts for an entire growing season or more.

How Often To Use Liqui-Dirt

Liqui-Dirt products may be applied as often as every two weeks. However, if you’re not actively feeding plants with it, you don’t need to apply it nearly as often.

For revitalizing the soil, use Liqui-Dirt just one time before and after each growing season.

Can You Use Liqui-Dirt for Houseplants? 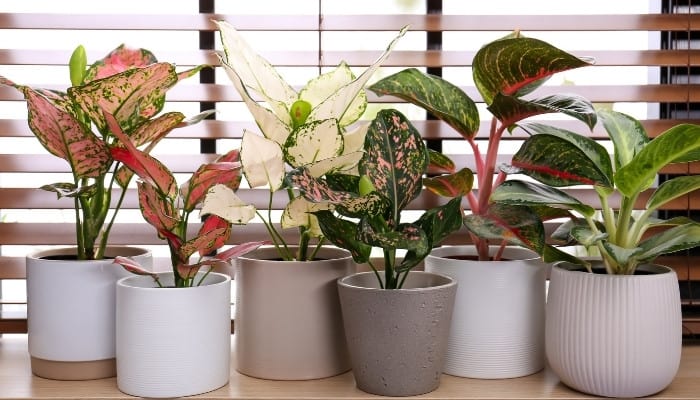 The magic is that the product genuinely restores soil health, and all plants directly benefit from healthier soil. So, technically, it can be used for all plants that grow in soil.

Can You Use Liqui-Dirt With LECA?

But what about LECA, you might ask? The answer is still yes. You can use Liqui-Dirt with LECA, and, in fact, the plants will be more than thankful for it.

In reality, Liqui-Dirt is helpful to plants growing in just about any type of medium.

Can I Use Liqui-Dirt in the Winter?

Liqui-Dirt may be used any time of the year, even in the winter.

Truthfully, most plants don’t need much food during the winter because they’ve already stored up enough energy and nutrients to hibernate until the spring.

Further, applying Liqui-Dirt or some sort of fertilizer during the winter is not only wasteful, but it may be harmful.

However, if the soil that plants are growing in is in need of revitalizing, by all means, applying Liqui-Dirt is helpful and safe to do in the winter.

Do You Use Fertilizer With Liqui-Dirt?

There is no need to use fertilizer along with Liqui-Dirt. In most cases, using the product does away with all need for extra fertilization.

If you apply fertilizer to plants growing in soil regularly treated with Liqui-Dirt, it may be a complete waste and may even overfertilize the plants and kill them.

SUPERThrive is a product with a focus on stimulating plant growth, especially during the transplanting stage or for plants that are recovering from natural damage. (You can find it here at a good price.)

It consists of highly concentrated ingredients that may damage plants if they are overfed or already fertilized.

Liqui-Dirt on the other hand is an all-purpose soil revitalizer that consists of 18 high-grade organic ingredients.

It is very unlikely that even overfeeding with it would damage most plants even remotely as much as SUPERThrive can (again, only if used improperly).

You already know the 18 ingredients in Liqui-Dirt; if you forgot you can scroll back up and remind yourself.

The ingredient found in Dyna-Gro include:

As you can see, if it’s an organic solution you’re after, Liqui-Dirt seems a much more natural choice than Dyna-Gro.

Liqui-Dirt is useful for more than simply revitalizing soil; it is also greatly beneficial for hydroponic applications depending on what species you’re growing.

Applied to hydroponic growing systems, the product provides everything plants need to grow and thrive.

The main concern is keeping a well-balanced pH and EC level while using Liqui-Dirt for hydroponics.

What Happens If You Use Too Much Liqui-Dirt?

When you apply too much Liqui-Dirt, there is a slight chance of burning your plants. By “burning” we mean overfertilizing them or giving them too many nutrients.

That said, most plants simply won’t absorb the extra nutrients if they don’t need them. Furthermore, using too much Liqui-Dirt is actually a really hard thing to do.

Liqui-Dirt is easy to find and buy online, but in person, it may be a bit trickier to locate as the product is primarily available via the Liqui-Dirt LLC website and major online retailers like Amazon.

Liqui-Dirt is an excellent option for those seeking an all-natural alternative to common fertilizers like raw animal manure or strong chemical-based products that may be harmful to pets or children.

It is completely organic, easy to use, safe to use around pets, and replaces most needs for additional fertilizer in the garden.