Leylandii is a popular species of evergreen trees that is often pruned and shaped into hedgerows.

Knowing how big they grow in terms of width and height as well as their natural growth rate is crucial if you plan to care for them.

How fast do leylandii grow? Leylandii is the fastest growing conifer in the world, gaining up to more than 35 inches per year. When left untrimmed, leylandii can reach heights of more than 100 feet and often grow to be more than 20 feet wide. Pruning several times each year is necessary to help to control growth.

You’ll even find advice on spacing to consider when planting leylandii trees.

The leylandii conifer tree grows as much as 3 feet each year, which is part of the reason you need to prune them up to three times each year. In some areas, by law, they are only allowed to be 6.6 feet in height.

In the following sections, we discuss the leylandii growth rate and why understanding it is more important than with other common hedgerow species.

Leylandii trees and hedges grow approximately 35.5 inches annually. It is the fastest-growing conifer species in the world – a fact that is both as useful as it is bothersome.

The fast speed that it grows at makes it one of the most ideal species in the world for landscaping.

Because the species grows so fast, it requires twice as much, if not three or four times as much, pruning and shaping, as similar evergreen species commonly used for hedges.

Do Leylandii Grow All Year Round?

Leylandii isn’t as cold-hardy as some evergreen species, and they do not grow all year round. From about October or November, most leylandii trees and shrubs go dormant until March or April.

However, in some regions where the ground and the root zones of trees never reach freezing temperatures even during winter, leylandii may indeed grow all year round.

How Tall Do Leylandii Grow?

Natural leylandii trees may grow up to a whopping max height of 100 feet (sometimes even more) out in the woods.

In some neighborhoods, the maximum legal height of leylandii hedges is 6.6 feet (2 meters) though, so they rarely see such tall heights as their forest counterparts.

How Wide Do Leylandii Grow?

Typically, leylandii max out at a width of around 20 feet. That said, in some cases, massive, old, overgrown leylandii may reach as much as 25 or even 30 feet wide.

How Fast Does a Leylandii Hedge Grow?

Leylandiis grow at an average rate of 35.5 inches per year. This annual growth is mostly directed to the sides and width of the hedges and trees.

That’s why the sides of the hedges or trees need tending to twice to three times per year, and the top can go up to a year or two without a trim.

How Long for Leylandii To Establish?

If you are utilizing leylandii to establish a hedgerow, planting them 2 to 3.5 feet apart, expect it to take around two years to form a solid barrier.

If you opt to plant your leylandii 4 to 6 feet or further apart, the hedgerow will take around three or four years to completely thicken up and fill in.

How Long Does It Take Leylandii To Reach Mature Size?

In most cases, leylandii reach “mature” size in as little as 2 or 3 years. If the growing conditions are less than desirable, a state of maturity may be delayed by an extra 1 or 2 years.

Planting your leylandii at proper depths and leaving adequate room between each one is crucial for establishing healthy root systems and reaching a mature size quickly. 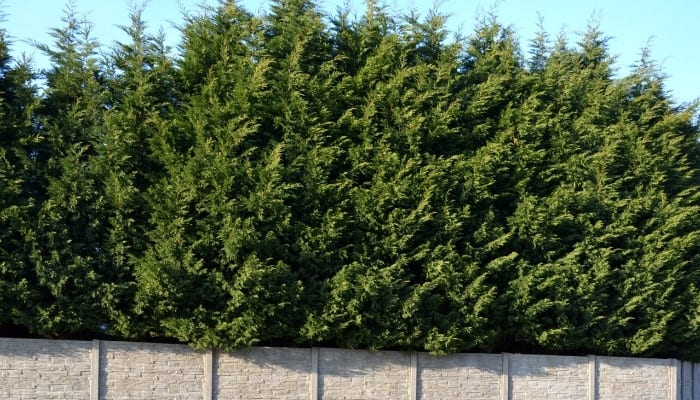 How Far Apart To Plant Leylandii

There is no right or wrong spatial distance to plant your leylandii trees when creating your hedgerows.

Most folks plant them around 3 feet apart, which allows for a quick-forming hedge.

Others opt to plant them a bit wider and wait an additional year or two for them to grow together and form solid hedges.

For the most part, leylandii are easy to manage once you get the hang of routine pruning. Below, we cover some of the occasional problems you may run across.

Perhaps the most common problem with leylandii is the lack of light that they may create for you or your neighbors.

When left to themselves for a few years, the species quickly becomes overgrown. If they are not eventually dealt with, the species grows up to 20 feet wide and 100 feet tall.

Keep your leylandii hedges topped and/or trimmed. Prune at least twice per year.

An obstructed view is just as common a problem with leylandii as lack of light is.

When leylandii become overgrown, they may obstruct the view for you, your neighbors, and maybe even drivers on the road.

Prune and/or trim your leylandii a couple of times each year.

Believe it or not, nearby gardens, including yours, are in danger from your leylandii if it is poorly maintained.

Not only may falling tree branches damage garden plants, acidic evergreen “leaves” disrupt the pH of the soil.

Trim your leylandii regularly and properly dispose of the clippings and branches.

As with any tree species, leylandii that aren’t properly looked after pose the potential risk of injury to self, passersby, or property via falling branches (or the tree itself falling over).

The best way to minimize potential damage from trees is by keeping them properly maintained and trimmed.

Do Leylandii Ever Stop Growing?

As far as we know, leylandii doesn’t ever stop growing as long as they have the resources to keep growing.

Many leylandiis planted in the 19th and 20th centuries are now over 150 years old and still growing just fine.

How Can I Make My Leylandii Grow Faster?

The best way to make your leylandii grow faster is to keep them fed, watered, and trimmed every spring, summer, and fall.

Leylandi grows around 3 feet per year, most of it on the sides. Eventually, they can reach widths of more than 20 feet and heights of well over 100 feet if left to their own devices.