If you’re thinking about getting involved with growing mushrooms, king oyster mushrooms are one of the first species you should consider.

Not only are they easy to grow, but they are also one of the biggest, meatiest, tastiest mushrooms that you can reliably grow at home.

Below, we discuss this big delicious oyster in greater detail, read on to learn more!

The king oyster mushroom, or Pleurotus eryngii, king trumpet, or royal trumpet, depending on what you choose to call it, is the biggest and softest of all oyster mushrooms.

The flavor is likened to scallops and the texture to meat.

Heavily used in Korean, Japanese, and Chinese cuisine, the mushroom originally hails from Mediterranean Europe, Africa, and the Middle East.

Today, the king oyster mushroom is grown commercially throughout Asia and cultivated around the world.

The king oyster grows between 4 inches and 6 inches long. After it’s harvested, it lasts for around one week or so in the fridge.

Unlike other mushrooms, it doesn’t lose its shape when cooked. 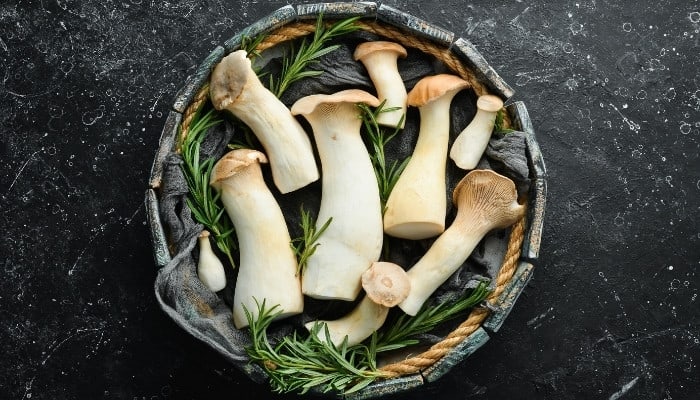 When king oyster mushrooms are young, they have a thick white stalk and a thin flat tan/light brown cap with wavy-looking gills on the underside.

The larger that they grow, the more their tops may take on a shelf-like appearance.

The king oyster mushroom is full of uses. For starters, they are full of protein, vitamins, and nutrients as well as fiber.

Due to their contents, king oysters are very beneficial to your health.

They are nutritious, promote immune system health and heart health, provide antioxidants, and are anti-inflammatory by nature.

Technically, you can eat king oyster mushrooms raw, but they don’t taste nearly as good as cooked ones.

However, some folks claim you shouldn’t eat them raw as they may upset your stomach.

Popular opinion holds to the thought that the entire mushroom is edible, either cooked or consumed raw.

Can You Eat the Whole King Oyster Mushroom?

The whole king oyster mushroom is fully edible. That means you can eat the entire thing. They are incredibly popular in gourmet restaurants due to their sleek shape and great taste.

The king oyster has an meaty, savory taste that is increased when you cook it.

Some king oyster fans claim that they taste very similar to savory scallops, oddly enough, with a hint of black licorice.

Others claim that they taste similar to thick and aromatic meat.

King oysters are incredibly nutritious. They are packed with non-starchy carbs, protein, dietary fibers, vitamins, and minerals, and they lack fat and cholesterol.

These mushrooms are also loaded with plenty of high-quality amino acids.

It is safe to say that king oysters are considered a healthy food; they are among the healthiest mushrooms you can eat. No kidding!

They can even be used in place of meat in many dishes and maybe even better for you than the meat would be.

Mushrooms are extremely beneficial to your health, providing vitamins, minerals, nutrients, and more.

What makes them so different is that their stems are not as harsh, and they grow larger and thicker than others. They also have a different taste than other oyster mushrooms as well.

Can You Grow King Oyster Mushrooms at Home?

King oysters are one of the most popular mushrooms to grow at home.

Most of the time these mushrooms are grown on straw, but corn cob, sugar cane mulch, and other substrates rich in cellulose may be used.

With a bit more air and light, they will grow a smaller stem and a larger and darker cap. In other words, you have complete control.

These delicious shrooms are not only easy to grow, but they’re also quick growing at that.

Even more, they react so vividly to environmental changes that you can have a bit of fun with producing various mushrooms with different appearances.

How To Cook King Oyster Mushroom 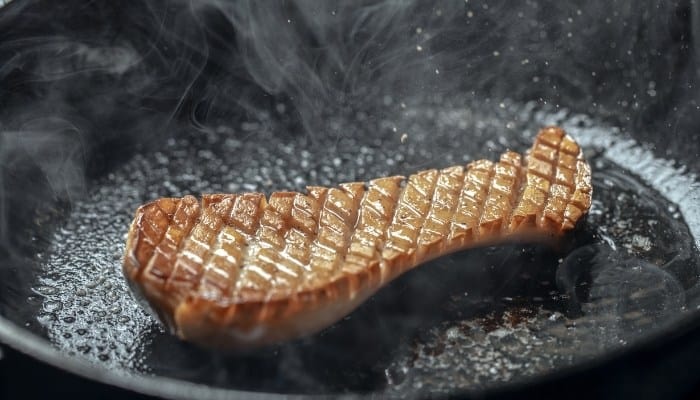 King oyster mushrooms are a versatile cooking ingredient; they are can be prepared in several different ways. Below are the basic steps to cooking a king oyster:

King oyster mushrooms may also be battered and deep-fried, if you prefer.

To do so, prepare your batter, dunk the mushrooms in egg, then batter, and place them directly into the deep fryer.

How To Grow King Oyster Mushrooms at Home

Growing king oysters at home is possible through several methods, including purchasing a grow kit.

Below, we list the steps for growing your own king oysters at home from scratch.

Start by taking clean cardboard and cutting it into several 4-inch by 4-inch or 5-inch by 5-inch squares. They don’t have to be perfect.

Bring a pot of water to a full boil and then place the cardboard inside. Put a lid on it and remove it from the stove.

Set the pot with cardboard soaking inside, to the side and let it sit for at least 8 hours, if not overnight.

Return to the cardboard, remove it from the water, and place your king oyster spawn. You may put up to 10 pieces on each cardboard square.

As you go, stack the squares on top of each other.

Once your spawns are layered in between cardboard squares, place them inside of a plastic bag that you can tie shut.

Place the bag somewhere dark and warm. They prefer temps of 50°F and 68°F.

Come back 3 to 6 weeks later and check up on the bag of spawn and substrate. If you can see white on the bag and cardboard, it’s time for the next step.

7. Give Air When Mycelium Appears

When you see the whiteness of the mycelium appear, you can open the bag up. Allow it to breathe from now on.

Move the bag to an area with enough light that you could read a book without straining your eyes. Make sure it isn’t too cold though!

As your mushrooms begin to develop and grow out of the mycelium, help them along by misting them with clean water twice daily.

When the time is right, you’ll know by the size and appearance of the king oysters.

When their stems are a few inches tall and their caps are wide, flat, and darker than when they first appeared, it’s time to harvest.

King oyster mushrooms can also be grown in a DIY mushroom fruiting chamber. It’s easy to set up and simple to use. We explain in depth here.

Some mushroom growers claim that mixing 90% sawdust and 10% wheat bran yields an even larger harvest. 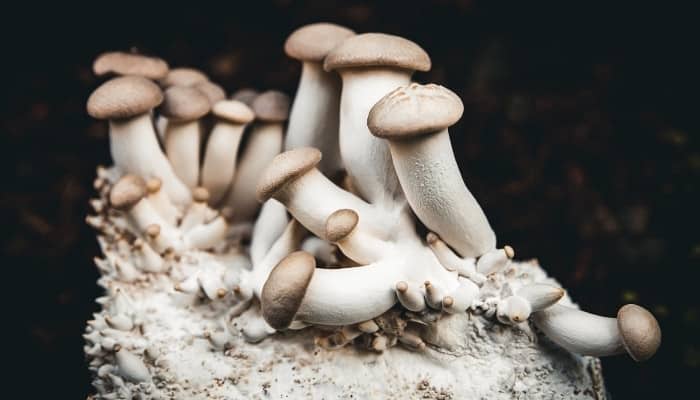 King oyster mushrooms require a temperature of between 50°F and 68°F.

Unlike many types of mushrooms, king oysters can handle flux in temperatures as long as it stays within the ideal range.

The humidity level should be around 80%, perhaps slightly more. That said, humidity of 90% or higher will cause deformed caps.

At that point, just enough light to read something without squinting is enough.

How Long Do King Oyster Mushrooms Take To Grow?

From scratch, king oyster mushrooms take around two months to grow. Once they start pinning, they are ready for harvesting in less than a week.

That said, if you’re growing king oysters from a kit, they’ll finish growing in just a week or two.

When and How To Harvest King Oyster Mushrooms

The best part about growing king oyster mushrooms is harvesting them. To do so is super easy.

Harvest king oysters by carefully plucking them out of the substrate by the very base of their stem.

If you’re working on more than one flush of mushrooms, be cautious and avoid disturbing the rest of the substrate.

Once harvested, the mushrooms stay fresh for around a week, maybe slightly longer.

How To Store King Oyster Mushrooms

There are several ways to store king oysters: in a plastic container with no lid, in a paper bag (closed), or even in a grocery bag or resealable bag (not closed).

Regardless of how you decide to go about it, you’ll need to store your mushrooms in the fridge. They will last for just over a week.

If you’re not ready to use them after a week or so of storing them, consider cooking them, straining the juice, and restoring them for a bit longer.

How Do You Grow King Oyster Mushrooms Outside?

King oysters can be grown outside in your yard; it just takes a bit of preparation. Start by clearing an area of weeds, grass, and other plants.

Next, put down straw, sawdust, or whatever substrate you choose to use.

With your bed prepared, sprinkle the king oyster mushroom spawn on top, and then add another layer of the substrate to your bed.

Continue this process until you’ve planted all the spawn you desire.

Make sure that the last layer of your mushroom bed is one of a substrate, not spawn.

Add enough water to soak the entire bed and then sit back and wait for nature to do its thing. Just make sure to keep an eye on the moisture level and add water if it starts to dry out.

If you have access to a couple of hardwood logs or stumps, we recommend giving these BetterFungi King Oyster Spawn Plugs a look.

These plugs come with clear directions for use and are a great way to get the whole family involved in a mushroom-growing endeavor. 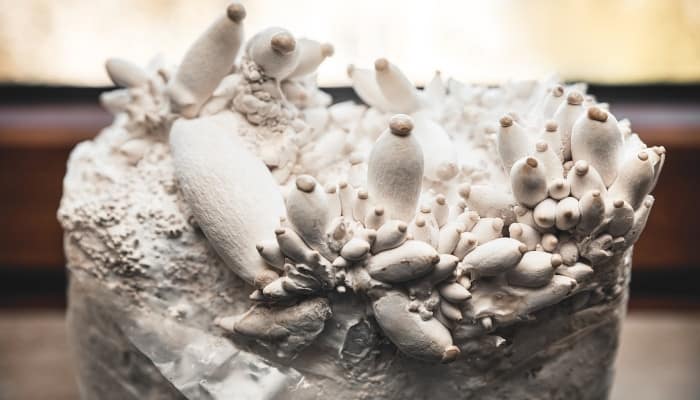 Growing mushrooms is relatively painless. However, there are a few common problems that may occur during your learning curve.

There are several reasons why your king oyster mycelium may not form correctly. For starters, you could have used unsterilized substrate, equipment, or water.

Other common reasons for mycelium not forming include using bad spawn, high temperatures, poor inoculation, and other unknowns.

Practice care when “planting” your spawn. Use distilled water, and sanitize your substrate, tools, and hands while setting up your mushroom grow.

Also, keep it moist, and regulate the temperature properly.

If the mycelium shows up on time, but the mushrooms never pop up, there are several common culprits, including using the wrong type of substrate.

Mold, mites, toxins, and a bad spawn are also common reasons for the mycelium to not produce mushrooms.

If your mycelium never produces mushrooms, you’ll need to start the process over and do a few things differently.

First, make sure there are no toxins still present in the growing area, then double-check your substrate and make sure you’re using a proper one for king oysters (sawdust or straw is suggested).

Also, try planting spawn from a different batch as well this time around.

If the king oyster mushrooms showed up for the party but stopped growing before they reached maturity, the problem could be:

The best solution for mushrooms that fail to develop properly is to learn from your experience and start a new run of king oysters.

If you take notes during your growing periods, you’ll be able to avoid the conditions/reasons that caused your last mushrooms to fail.

Growing king oyster mushrooms is a great idea for those who enjoy eating these tasty shrooms or are interested in selling them on the local market.

There is a small learning curve involved, but nothing you can’t handle!

Depending on how you get started, you could be munching on some fresh king oysters in as little as 10 days (from a grow kit) to 7 or 8 weeks (from scratch).