If you’re looking for a deer-resistant flower with a long blooming season, lantana is a great choice.

There are about 150 species from which to choose, and they come in various colors and sizes. So, there’s bound to be one that strikes your fancy.

Is lantana deer resistant? In most cases, deer won’t touch lantana because of its strong smell and rough texture. Famine situations are the exception to the rule. However, lantana plants are toxic and may kill a deer if they eat over 1% of their body weight in lantana leaves, flowers, or berries.

By learning more about this hardy flower, its deer resistance, the best varieties to try, and how to care for it, you’ll be well on your way to enjoying gorgeous blooms that will be the envy of the neighborhood.

Finding plants for your landscape can be tough when you live in a deer-populated area.

The simplest approach to improving your landscape without treating the local deer to a nightly buffet is to grow plants, like lantana, that deer generally do not care much for.

Deer do not like lantana because they tend to avoid strong-smelling plants. They also prefer plants with softer leaves and shoots rather than the rough, jagged leaves and prickly stems that lantana has.

However, lantana does not act as a deer repellant. Some gardeners report success planting strong-smelling plants like lantana near deer-temptation plants.

However, in most cases deer will avoid lantana only to move on to softer plants nearby.

When Deer May Eat Lantana

Lantana is most likely to tempt a starving deer when the first shoots come up in spring and the plant has yet to develop woody stems.

Lantana is toxic to mammals, including deer. The toxins in lantana are triterpene acids lantadene A and B.

When mammals eat 1% of their weight in lantana leaves, flowers, or berries, they will experience symptoms of poisoning or even death.

*Note: If you live in a warmer climate, be sure that any Lantana camara variety you buy is sterile and unable to produce viable pollen or seeds. Otherwise, it can become invasive. 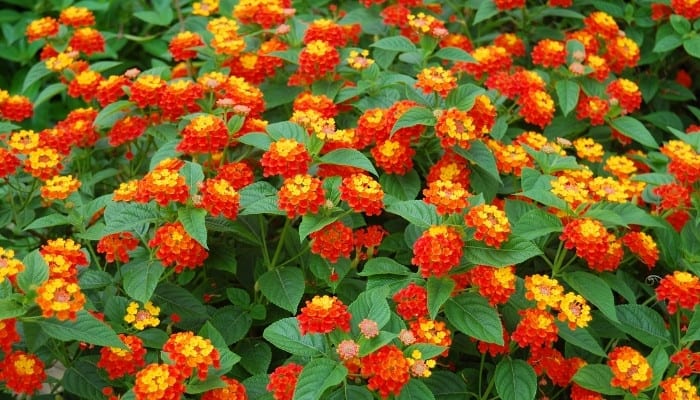 Lantana is a leggy plant that blooms nonstop for about eight months, so it can take over your garden if you don’t keep it pruned back. Pruning is especially essential in warmer climates where it is a perennial.

If you live in an area with heavy frost and harsh winters, lantana grows as an annual and will die back in the winter.

At the end of lantana’s growing season, you can either remove the plant entirely or trim it to ground level and remove the dead branches.

However, if you live in hardiness zones 8-11, lantana functions as a perennial that will come back in the spring as long as the temperature stays above 28°F most nights.

To protect the roots of a perennial lantana in a low-temperature region, you should take the following steps:

Lantana’s strong scent repels some but not all creatures.

Some gardeners report rabbits occasionally eating their lantana, while others say that the strong scent keeps them away.

At any rate, lantana is toxic to rabbits, just as it is to other mammals. A 2-pound rabbit would only need to eat ⅓ of an ounce of lantana to consume a toxic amount, but this is a rare occurrence.

Does Lantana Keep Mosquitoes Away?

One study shows that houses with lantana have fewer mosquitoes around them than houses without lantana.

Another study shows that lantana extract repels 94.5% of Aedes albopictus and Aedes aegypti mosquitoes for up to two hours.

Lantana is a beautiful deer-resistant flower that grows well in a variety of hardiness zones. It’s easy to care for and is a perennial in warmer regions.

If you’re looking for a plant that deer will avoid, lantana can make a beautiful addition to your garden and provide extra benefits, such as keeping mosquitoes away and attracting butterflies.