In nearly all its many forms, dianthus is extremely hardy, capable of weathering both sun-baked summers and cold, dark winters.

However, even the hardiest plants aren’t immune from the searching muzzles of hungry deer—these voracious vegetarians have been known to gobble up as much as 6-8% of their body weight in greenery in a single day.

So, do the lovely varieties of dianthus stand a chance or are they doomed?

While dianthus is prized among horticulturists for its deer-resistant properties, some varieties are more resistant than others.

Keep reading to find out which readily available species will do the best job of keeping long-legged garden interlopers at bay and to review basic care of dianthus plants.

If you’re thinking about putting down dianthus in an area where deer commonly forage for food, you’ll be pleased to know that most species of dianthus are indeed deer-resistant.

In other words, you can devote your precious time to growing them without fear of them becoming a snack.

Dianthus is a genus of flowering plants that encompasses some 300-plus species, all of which are aversive to deer, thanks to their natural toxicity and potent fragrance, which is reminiscent of cloves and licorice.

Consequently, any of the following types will come with inborn protection against deer.

Note: Just because a particular plant is “deer resistant” doesn’t mean that deer won’t touch it. Deer will usually turn to other plants to satisfy their appetites first, but they’ll eat just about anything when they get hungry enough.

The classic carnation is arguably the quintessential dianthus. Carnations are such a timeless and iconic flower that many people don’t even realize that they’re a subcategory of dianthus.

These striking perennials come in various colors and shades but are most often white, pink, red, or deep, velvety purple. There are even variegated carnation cultivars, which are a real delight to see. 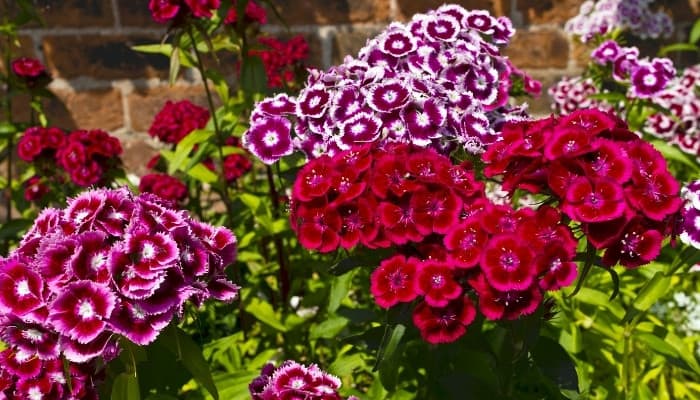 Dianthus barbatus, colloquially known as sweet William, is one of the most popular members of the Dianthus family, having been an ornamental staple of homes and gardens around the world for hundreds of years.

Sweet William is distinguishable by its small, gently overlapping flowers, which are typically a vibrant red with serrated white edges or vice versa.

It’s also notable for its pleasant perfume, a veritable homing beacon for bees, butterflies, and other pollinators. 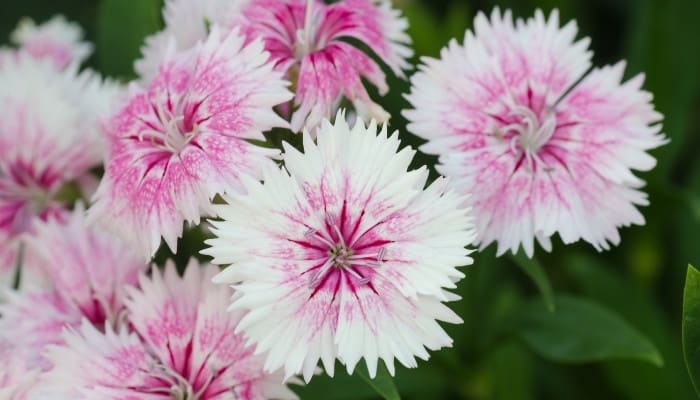 The rare dianthus that doesn’t relish heat or humidity, Chinese pinks are native to northern China, Korea, and southern Mongolia.

Still, they can grow just about anywhere—provided it’s not too warm.

While they exhibit many of the same characteristics as other species, their fiery coloring and sharply accentuated petal shapes help set them apart.

The temperate preferences of Chinese pinks make them an excellent option for growers who live in moderate or cool climates.

Dianthus is as resilient as they come, which is good news for novice gardening enthusiasts.

If you want to savor your plant’s resplendent beauty for as long as possible, however, it’s important to know how to care for it properly.

Here are some general tips for keeping your dianthus happy and maximizing its lifespan.

Dianthus thrives in hot, dry conditions. As such, most varieties prefer full sun and well-drained (but not thirsty) soil with a neutral or slightly alkaline pH.

Amendments are a must for clay and silt soils, as their moisture-retentiveness can create problems for the plant’s root system over time.

If you’re planting dianthus in your garden, choose a spot that receives at least six hours of direct sunlight per day.

When raising the flowers indoors, situate them in a south-facing window or well-lit open area where they’ll be able to soak up plenty of rays.

Get in the habit of watering your dianthus about once a week. Feel free to give it a good dousing, but make sure the soil or container you’re using is set up to allow for thorough draining.

Dianthus is susceptible to stem rot, so allowing your soil to remain too wet for too long could mean bad news.

As far as nutrition goes, dianthus is quite self-sufficient and doesn’t require much in the way of external supplementation.

Regular feeding should therefore be unnecessary. If you like, you can add a small amount of organic compost to your soil every 6-12 months to help it along.

Dianthus handles mild winters like a champ, but prolonged exposure to icy conditions could prove too much for it.

Protect garden growers by covering them with a frost blanket, like this floating row cover with extra thickness, when the forecast calls for temperatures to dip below freezing.

If you have container plants that you usually keep outside, simply bring them indoors overnight and put them back out once it warms up again.

Unfortunately, dianthus’ deer-resistant properties do not extend to rabbits.

Rabbits will make a meal of just about any sort of foliage they find growing at ground level, including carnations and other types of dianthus, despite the fact that they’re often poisonous to small animals.

Much like rabbits (and deer, for that matter), squirrels don’t have a special appetite for dianthus, but they’ll happily chow down on the flowers, leaves, and stems alike if their survival demands it.

That said, you shouldn’t have to worry about this happening unless there’s nothing else growing in the immediate vicinity.

When you’re weighing the pros and cons of making dianthus part of your garden, the threat of deer should realistically be one of the last things on your mind.

You’d be much better served to invest your time and energy in figuring out how best to care for and display the specific variety you’ve selected, which will no doubt serve as an endless source of enjoyment when warm weather invites the delicate buds to blossom.