Both commonly foraged for berries, huckleberries and elderberries are sought-after fruits that have great health benefits, potential medicinal qualities, and enjoyable taste.

Although, as with many plants foraged, it can be difficult to tell them apart or even to know if what you’re picking is safe to eat.

What’s the difference between huckleberries and elderberries? These plants can be easily confused as they’re similar in shape and color, but a ripe elderberry is shiny, and a ripe huckleberry is dull. Elderberries are significantly smaller than huckleberries, and the elderberry shrub can be identified by its sawtooth leaves and tiny bumps on its gray bark.

There is much more to learn about the unique properties of each of these plants. Read on to learn more about these two amazing berries.

The easiest way to tell huckleberries and elderberries apart is to identify the plant that they came from. While the berries might resemble one another, the plants are vastly different.

There are two major, but different, types of huckleberry. While both produce edible berries, the common huckleberry (Gaylussacia) is native to the eastern United States while western huckleberries (Vaccinium) are native to the Pacific Northwest.

Western huckleberries are most commonly foraged and will be the subject of this article.

It should be noted that the Vaccinium genus also contains commonly cultivated berries such as the blueberry and cranberry.

The red huckleberry grows most readily in the Pacific Northwest. Typical range for the red huckleberry is as far south as Central California, as far north as British Columbia, and as far east as the mountains of Montana and Idaho.

The huckleberry grows up to an altitude of 11,500 feet and can be found in multiple habitats like mountain slopes, forests, or lake basins.

The huckleberry plant is a deciduous shrub with oblong leaves. Depending on the species, the huckleberry’s young stems can be waxy or hairy.

Flowers are small and urn shaped and come in a range of colors from green to red, white, or pink. The shrub grows from 5-7 feet tall.

The elderberry plant is a woody shrub, meaning that when you look at the branches, you’ll see bark rather than the pliable green stems of an herb.

The elderberry leaves grow opposite each other with little to no stem. The leaves themselves are long and have serrated edges.

The most reliable way to identify an elderberry shrub during any season is to look at the bark. It’s gray with tiny bumps along it called lenticels.

Elderberry shrubs grow flowers in clusters. Each of these clusters can have hundreds of flowers that will eventually turn into berries. The flowers have five petals and five stamens.

The elderberry plant can grow from 6-12 feet tall. The bushes are made from several canes that are the production centers of the flowers and fruit.

The berries of each of these plants can resemble one another, although the elderberry is small and shiny while the huckleberry is plump and dull, much like its cousin, the blueberry. 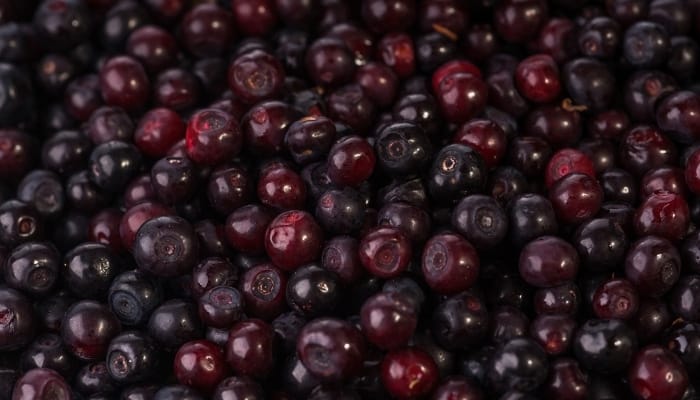 Huckleberries are very similar to blueberries or cranberries, depending on the plant. They are sweeter than a cranberry but tarter than a blueberry.

Huckleberries are ripe and ready to pick from mid-August to mid-September when they have darkened, are slightly soft, and are dull rather than shiny. 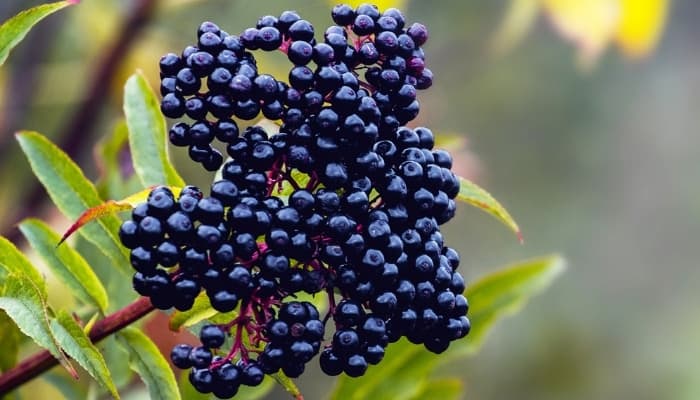 Elderberries are small, very dark blue berries that hang in large clusters from the elderberry shrub.

They are toxic if eaten uncooked in large quantities. Once they’re cooked, the toxicity diminishes.

Elderberries are ripe and ready to pick from mid-August to mid-September when they’ve become dark purple and the cluster of elderberries has begun to sag from the weight of the ripe fruit.

Both the huckleberry and elderberry are harvested for their valued but different health benefits.

Huckleberries, like blueberries and cranberries, are great sources of many vitamins and minerals while being low in calories. This makes them a great health food.

Huckleberries are great sources of Vitamins A, B, and C as well as iron and potassium.

Elderberries are full of many of the same vitamins and minerals that huckleberries contain. Vitamins A and C as well as iron, calcium, folate, and potassium make up the elderberry’s nutrition profile.

There is some limited evidence that shows that the elderberry has potential cold-fighting properties.

A few small studies have shown that people who took elderberry while they had a cold saw some reduced symptoms.

The berries of these plants are used for a variety of purposes. You’ll find them used for eating right off the plant, being made into extracts to be used medicinally, or anything else in between.

Huckleberries are primarily used the same as the blueberries or cranberries that they’re closely related to.

Elderberries have been used for generations as a cure for many illnesses, all the way back to Hippocrates, the “father of medicine.”

Although more scientific evidence needs to be gathered, there is a small body of evidence that elderberry reduces some of the symptoms of cold and flu.

Where Do Huckleberries Grow?

Depending on the type of huckleberry, they can be found almost anywhere. The most commonly foraged huckleberries are found in the Pacific Northwest and Rocky Mountain West.

The eastern huckleberry can be found from the Mississippi River to the Atlantic Ocean at almost all latitudes.

Are Huckleberries Easy To Grow?

While huckleberries can be grown outside their natural habitat, they can be difficult to fruit when cultivated at home.

The most important consideration is that huckleberries prefer acidic soil, so make sure that the soil pH is between 4.3 and 5.2; otherwise, your huckleberries will struggle.

Knowing the differences and understanding which berries are edible and which are potentially toxic is important when foraging for them in the wild.