So you’re thinking about homesteading in Indiana but don’t know exactly what you need to know before starting.

You are not alone, and that’s why we’ve recently compiled this accurate, in-depth, and most importantly, up-to-date guide for you!

Let’s get right to it.

Is Indiana good for homesteading? Indiana is better than many states when it comes to homesteading. In comparison to the best states out there for homesteading and living off-grid, like Alaska, it may fall a bit short. While it is perfectly legal to homestead in Indiana, there are a few codes and regulations that must be followed.

Read on and explore all of the answers to what you need to know before starting a homestead in this great state!

Indiana may not be the first state that springs to mind as a potential place to homestead, but it is definitely one worth considering.

In the following subsections, we discuss everything you need to know about homesteading in Indiana, including all of the laws that go along with it, such as zoning, livestock, guns, homeschooling, and more.

All states have their own laws in regards to homesteading. The most important of these laws designate a property as a “homestead.”

In the state of Indiana, this law allows you to claim up to $10,000 worth of your property as a homestead.

That said, unlike in other states, there is no cap on the maximum size your designated homestead can be.

That means your whole property may be protected from creditors in the case of financial disaster or bankruptcy.

The catch is that the value of the property may not be more than $10,000. So, more or less, your homestead is legally protected, but its true value is not.

It is also crucial to note that there are a few exceptions in the state of Indiana that may allow creditors to collect the debt via forcing the sale of your land, including:

Livestock laws are a crucial part of homesteading, no matter which state you choose to do so in. Indiana is no exception.

Thankfully, the laws regarding livestock in the state are pretty simple; some would say they are even lenient.

There are very few laws regulating the number of animals you may have, and most of them are passed by individual counties and municipalities.

Furthermore, in the state of Indiana, there are no real laws prohibiting exotic animals either, such as ferrets and birds.

The catch is that Indiana is harder than many states on those who neglect animals. It is a misdemeanor for neglecting or abandoning an animal that’s in your custody.

That means if you mistreat your livestock or deprive them of food and water, you will lose them and be prosecuted by the law.

Indiana zoning is both for and against living off-grid, so you’ve got to be diligent in your research before simply choosing any plot of land to homestead in Indiana.

For example, most counties have no problem with homesteaders setting up outside of town or even on the edge of town, but they fully expect them to go through all the legal channels.

That means filing for permits for just about everything you want to do on your land.

Whether it’s building a rainwater collection system, a shed, or a pole barn, you’re going to need a permit from the city or county.

You also need to be aware of the general zoning laws where your homestead is located. The laws are strictly enforced.

These zones affect the number of pets you can have, the max height of fences, and what kind of structures you can have.

Homesteaders in Indiana need land that is zoned as Rural Residential or Agricultural. These two types of zones allow the most breathing room.

Almost all counties and cities in Indiana have zoning laws.  These laws tend to be strict and specific about what you are legally allowed to do on your property.

They cover everything from the number of pets you can have to the maximum allowed fence height.

In addition, there are Indiana state building codes to be aware of as well. All buildings on your land must meet them, or you’ll be fined and need to rebuild them as well.

The state of Indiana is one of the best when it comes to farmers’ markets and such, as there are over 200 of them currently operating.

However, the state’s home-based vendor law puts a bit of a hamper on things for homesteaders, compared to other states.

To sell food from your home in Indiana, you must do so under the Indiana Cottage Food Producers law. That means you need to do it at a roadside stand or a farmers’ market.

You can not sell it out of your home or any other venue legally. The good news is that markets are all over the place and draw plenty of customers.

In addition, you could always apply for a permit to open a roadside stand or farmers’ market venue of your own from the edge of your property.

The Indiana Homestead Exemption is a deduction that reduced the assessed value of the part of your land that is designated as a homestead by up to 60 % (with a maximum of $45,000).

There are restrictions on the exemption, such as couples and individuals may only apply for one exemption per property per year.

You must also reside in a home on land that is less than an acre in order to meet the requirements for the exemption.

Last but not least, your exemption application must be filed by the last day of the previous calendar year.

The gun laws in Indiana are relaxed compared to many states but not so much when compared to southern and other mainly rural states.

You may carry a rifle and/or shotgun with no permit, which is a must for most homesteaders.

However, to carry a loaded pistol anywhere outside of their homestead, people must go through the legal channels and obtain a license to carry.

Additionally, some of the high-powered and fully automatic weapons that are legal in other states are banned in Indiana.

So, double-check the firearms you plan on using on your new homestead in Indiana, and make sure your once legal guns aren’t now illegal. 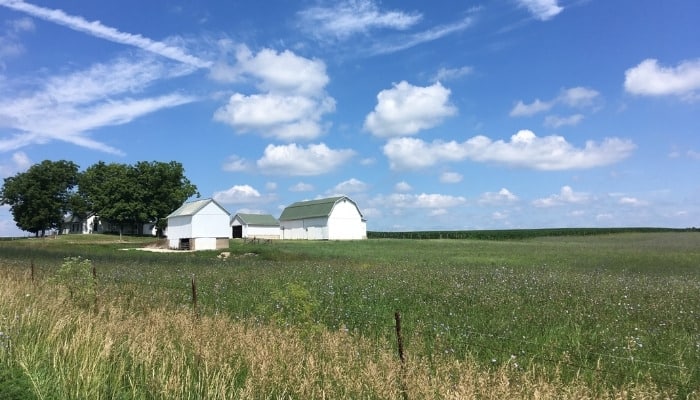 Indiana is the crossroads of America, and as many Hoosiers can testify to, there isn’t much BUT land in Indiana besides corn and soybeans.

Today there is just as much land as there has ever been for sale in this great state.

A quick browser on the interest revealed to us that thousands of listings for potential homesteads are live in Indiana right now.

From 1/2 acre lots to 50 acres lots, sites like Zillow and Landsearch are crawling with vacant land for sale in this state.

For homesteaders looking for a place to settle, you can expect to pay somewhere in between these two prices, likely on the low end for rural property.

Keep in mind that land prices are liable to fluctuate, as everything does these days, and check back often.

Also be aware of zoning restrictions, county ordinances, local environmental concerns, and more before jumping into any land deal.

Technically speaking, Indiana is in the humid subtropical climate region of the USA.

That means it has plenty of rainfall all through the year, as well as wet and cold winters and warm summers.

Truth be told, Indiana weather is as unpredictable as any region. As the Hoosiers like to say, just wait five minutes if you don’t like the weather in Indiana, because that’s how long it takes to change.

Indiana’s growing season typically begins during the end of April and dies off in the first week of October.

April 25th to October 5th is a good example of the average 160 to 165 day growing season in the state of Indiana.

The frost ceases around the middle of April, making it prime to plant during the end of the same month.

Likewise, the first frost of the fall/winter season sets in around the first week of October, marking the end of the growing period.

Throughout this 160+ day growing season, there is plenty of rain, nearly 48 inches. That’s more than the national average.

Furthermore, there are approximately 2 feet of snow each winter to hydrate the ground for next year’s crops.

Number of Homesteaders in Indiana

The exact number of homesteaders in Indiana is a hard number to peg.

Technically, there are hundreds of families more or less homesteading in the state. However, most of them are not registered exactly properly.

From all the information we have gathered, there seems to be only a few dozen fully legal and recognized active homesteads in the entire state.

That, however, does not account for all those living a homesteader’s lifestyle on their rural property.

Can You Live Off-Grid in Indiana?

The hard part is getting your off-grid homestead legally approved and recognized as such.

If you’re like many potential homesteaders, these little issues, such as zoning, building codes, and permits are just loopholes you need to jump through and are prices worth paying to live your intended homesteading lifestyle.

That said, many parts of the state are much easier for homesteading, legally and geographically.

The following areas have the most relaxed zoning in the entire state of Indiana:

Homeschooling in Indiana is a very realistic opportunity, unlike in some states. In Indiana, it is considered equivalent to attending a non-accredited private school.

That said, there are a minimum number of codes or regulations that dictate how you may homeschool your child.

The biggest factor about homeschooling in Indiana is that you must teach in English and provide instructions equal to those found in Indiana public schools.

However, the board of education is not permitted to define what it means to be equal to public schooling or to approve or disapprove of homeschool programs in the state.

How To Find Cheap Land for Sale in Indiana

There are several ways to find cheap land for sale in Indiana. A few of the most effective methods include:

Interested in digging up some more information on homesteading in Indiana or possible connecting with Hoosiers already out there doing it?

Here are a few links to help point you in the right direction:

What Are the Worst States for Off-Grid Living?

Many states in the USA are just not copesetic for homesteading, be it the land itself or the law of the land.

A few of the worst states for off-grid living are:

Is Indiana a Good Place To Live?

Indiana is a great place to live for many reasons; it’s safe and affordable, it has less traffic than many states, it has decent tax rates, and the people are friendly.

But, if you don’t like large stretches of completely flat land full of corn and soybeans as far as the eye can see, local holidays like “bring your tractor to school day,” or the smell of manure, Indiana may not be a good place for you and your homestead.

There’s a lot of information to gather and process before making any major move, even more so when homesteading is involved.

The bottom line? It’s more than possible in Indiana to have a legal homestead in full compliance with state and federal law without forgoing the lifestyle you want.

Hopefully our guide clears up any questions you had about what to know before starting a homestead in Indiana! Thanks for reading!