Growing peppers, specifically the best kind (jalapenos), is a pastime shared by millions of people around the world. For those who love them, there is nothing like a homegrown smoking-hot jalapeno pepper!

Thankfully, pepper plants are easy enough to protect from harmful bacteria, soil-borne diseases, and insects, which means you’re likely to have a decent harvest every year you grow them.

However, there are some larger pests, like rabbits, squirrels, and deer that you may need to worry about.

Will deer eat jalapeno plants? Deer are known for going out of their way to avoid most pepper plants, including sweet peppers, jalapenos, ghost peppers, and all the other varieties. Unless there is absolutely nothing else for them to eat in a mile radius or more, deer aren’t likely to ever bother your jalapeno plants.

In the following, we’ll explore all the most significant factors regarding deer eating jalapeno plants.

Deer and Jalapeno Plants – What To Know

Most deer are not naturally attracted to pepper plants, though they have been known to munch on bell peppers, particularly the green ones when they are near starvation.

On the other hand, it is believed that some deer species may indeed eat jalapeno plants even if they aren’t starving.

However, if you are growing mild or sweet peppers in addition to your hot jalapeno peppers, the hotter peppers will rarely be bothered by deer or other four-legged pests.

The way hot and spicy peppers smell (like chiles and jalapenos) and taste is known for repelling most mammals. That’s why deer are much more likely to eat mild or sweet peppers over hot ones.

In the following sections, we break down all of the most important aspects concerning deer eating jalapeno plants.

Generally speaking, deer don’t bother eating jalapeno plants. Furthermore, if they do decide to eat a jalapeno, it’ll most likely be the last time they do.

That’s because their mouths and tastebud receptors are a lot like ours are, which means the peppers are just as hot for them as they are for us.

That said, to be completely honest, there are some deer that do indeed seem to have a taste for the hotter peppers.

As with humans, there is no accounting for taste, and you can’t pigeon-holding an entire species into one set of tastes/preferences.

The bottom line? Some deer seem to enjoy eating jalapeno plants, and others don’t. Plain and simple.

When Deer Are Most Likely To Eat Jalapeno Plants

Hungry deer, like most starving animals, will eat just about anything in their path that isn’t made of metal, glass, or rocks when they can’t find any of the food they usually eat.

That means when droughts strike and wipe out the local vegetation or over-grazing occurs due to overpopulation of the local deer species, deer are likely to eat your jalapeno plants.

However, if you have milder peppers and/or less spicy veggies available, deer will gobble those down first.

Even when deer are starving, they prefer something other than a hot pepper if they have the choice.

For that reason, it’s wise to consider companion crops for your peppers. Think of them as a sacrifice to mother nature in order to ensure the success of your pepper crops!

Capsaicin, the main ingredient in hot peppers like cayenne and chilis, is a super hot substance that deer can taste just as acutely as humans do.

When deer do ingest capsaicin through their mouths or noses it causes an instant irritation that they’ll likely never forget.

Do you remember taking a bite of something hot when you weren’t expecting it? Deer feel the same way when they chomp down on chili or jalapeno, expecting a nice mouthful of green foliage.

In fact, this is exactly the reason why chili powder, paprika, and cayenne pepper powder are utilized as an organic pest control method in gardens and potted plants all over the globe.

Will Deer Eat Other Hot Peppers?

Deer aren’t known for eating hot peppers, especially those with a large amount of capsaicin.

They’d prefer to eat grass, shrubs, flowers, herbs, and many other vegetables and various types of foliage over hot peppers any day of the week.

However, there’s always a possibility that the one deer in your neck of the woods that has a taste for hot peppers may stumble across your pepper patch and wreak havoc if you have not protected it in advance. 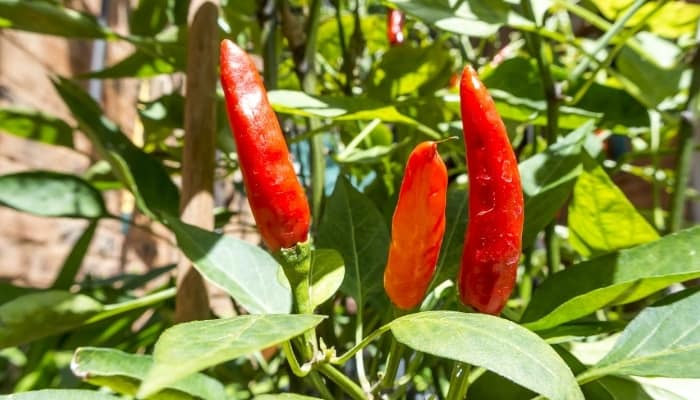 What Vegetables Will Deer Not Eat?

Deer are just as likely to eat the other plants in your garden space as they are your jalapeno plants.

However, there are some plants that deer just simply aren’t interested in unless they are starving. These include:

Most animals go out of their way to avoid eating hot peppers like jalapeno plants.

If anything, they may eat the leaves, but some animals are known for munching jalapeno plants down to the ground from time to time, including:

How To Keep Deer Out of Garden 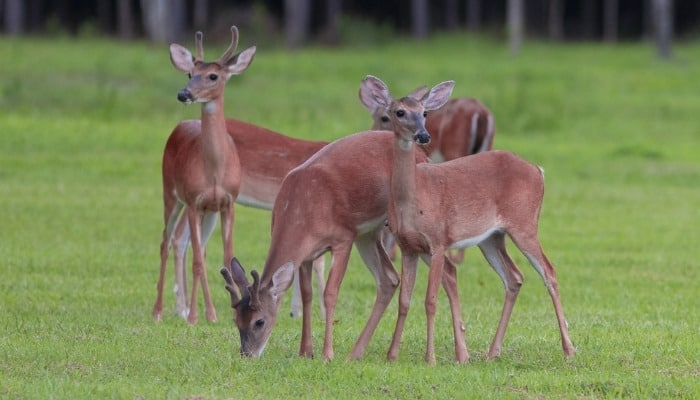 It’s better to be prepared and safe than caught off guard and lose your peppers to pests like deer and rabbits.

Here are 7 excellent ways to keep deer out of your garden and away from your jalapeno plants.

The first potential method for protecting your garden from deer is installing motioned-activated sprinklers.

These devices detect movement and then spring to life flinging water at deer that would otherwise stick around and munch some of your garden plants.

Motion-activated sprinklers are available in singles or as a network of sprinklers. Stick them in the ground every few meters or wherever the plants you want to protect are located.

Ultrasonic repellers are another quick and easy fix for keeping deer away from the garden.  Simply stick them in the ground, forming a perimeter around your yard or garden, and power them up.

The ultrasonic signals that are constantly blasted out from the devices are more than enough to send rodents and larger pests like deer running and to keep them away.

The good news is that the noises won’t bother you in the slightest!

A fence is one of the oldest and most successful deterrents for keeping pests out of our yards and gardens.

However, they are somewhat labor intensive and may cost a bit more than other alternatives. There is also the downside that even with a fence installed, some large pests can still go over it.

To avoid this scenario, be sure that either the fence is tall enough (8 feet) or that it is placed close enough to the plants that deer can’t reach over it and don’t have room to jump inside it.

A liquid fence is often a better solution than an old-fashioned physical fence. Liquid fencing is also often cheaper than installing an actual physical barrier around your yard or garden.

With a liquid fence, you can create invisible boundaries wherever you want.

Individual cages may also be a good solution, depending on your pepper plant situation. Wood is the most common material to make cages from, though metal and plastic screens may be used just as effectively.

All you need to do is nail a few boards together in the shape of a square cage and slip it over/around your pepper plants.

Just make sure the slats are spaced close enough together on the cage to keep the heads of deer out!

Soap shavings are a super quick and easy alternative method for keeping deer away from your jalapenos and garden in general.

All you need to do is procure a bar or two of a strong-smelling soap like Irish Spring, and shave it up with a knife or tool.

Once you have a container or bag full of shavings collected, go and toss them all around the garden.

The smell and taste of the soap are extremely disturbing to deer, and they are likely to say away from anything near it.

Electric fencing is a great option for keeping deer out of larger gardens and small farms. It is more expensive than other options, but it is typically well worth the cost.

These can be constructed to encompass any size garden and have low-voltage electricity running through them that lightly zaps anything that touches it.

After a single zap, most deer are easily discouraged from even thinking about coming further.

Most deer only eat the leaves and other green parts of pepper plants.

Deer also eat pepper plants when they are on the brink of starvation, in the case that there is nothing else available to eat, and when they are sick or dying and aren’t as picky about what they are eating.

Some deer, like people, however, have a particular taste for peppers, though it isn’t common outside of bell peppers and other mild green peppers.

Rabbits are another animal that is known for eating the leaves of jalapeno pepper plants, though they are rarely interested in the hot peppers that contain capsaicin.

They are also known for eating young plants and fresh shoots from pepper plants rather than the peppers themselves.

Cinnamon is one of the natural aromas that deer are disgusted by. Other smells that deer can’t stand are mint, cloves, onions, and vinegar.

Many of the best deer repellent products either include natural ingredients or synthetic ones that mimic such aromas as cinnamon and mint.

Now that you know all about deer and jalapeno plants, you should have no problems protecting your plants from here on out.

Just remember that deer are like people; sometimes, they do the unexpected.

Even though the majority of deer don’t enjoy hot peppers (or sweet ones for that matter), there are always going to be rogue deer that do want to gobble up even your hottest peppers.

That’s why it’s important to plan for deer before you even plant your peppers. Hopefully, these 7 tips help you get it done!