Corn is probably one of the last garden variety species that pops into mind when you think of microgreens.

But, believe it or not, it’s one of the top microgreens you should be considering growing/adding to your diet.

Read on below to discover the full story of corn microgreens, from start to harvest!

These microgreens might not be the first on people’s grocery lists or growing lists, but there’s no reason they should not be!

Corn microgreens are easy to grow, taste really good, and are packed with essential vitamins and other good stuff.

In the following sections, we cover everything you need to know about growing them.

Corn microgreens are very healthy. They are loaded with essential nutrients like calcium and magnesium as well as vitamins A, B, C, and E.

Besides having more protein and fiber, they couldn’t much healthier for you if they wanted to be.

The benefits of corn microgreens are even more impressive than many of the microgreens you may already be familiar with:

They are said to have a slightly sweet and bitter aftertaste. These microgreens make a fresh and crispy addition to most salads and dishes too.

How Do You Use Corn Microgreens?

To use your corn microgreens, simply cut them, rinse them thoroughly, and add them to your favorite foods. Many people add them to eggs, salads, soups, sandwiches, and other dishes.

They also make an excellent garnish as well. Store leftovers in the fridge for a day or two.

It’s true, corn microgreens have a bit different taste than the other microgreens you’re used to growing and eating, but they are just as tasty in their own way.

Here are a few of the simple corn microgreen recipes to enjoy:

Your favorite stir-fry just got a whole lot healthier, especially if you enjoy the kind with those cute little baby corns.

Add a handful of corn microgreens to the skillet and watch the meal take on a whole new nutritional value.

That said, you need to wait until after everything else has finished cooking, or the microgreens will lose all of their healthy goodness.

Almost any salad is ripe for adding a dash of corn microgreens. They go really well with fresh tomatoes, spinach, a bit of cheese, sea salt, and crushed black pepper!

Corn microgreens are also a great ingredient for most sandwiches. They add a bit of crunch to the toppings and a fresh garden taste to your sandwiches overall, whether burgers or hot ham-n-cheese.

Forget the oregano, basil, or parsley on your next omelet, and throw in a few corn microgreens once it’s almost finished cooking. Onions and tomatoes make good companion ingredients.

If you’re a smoothie kind of person, corn microgreens could be your new best friend. They can be added to just about any smoothie that already has room for a veggie or two on its ingredients list.

How Long Do Corn Microgreens Take To Germinate?

Once prepared and planted, corn microgreens take around two to three days to germinate.

However, depending on the species and other factors, like the humidity and light level, some seeds may take between 4 and 10 days to germinate fully.

Should Corn Seeds Be Soaked Before Planting?

Unlike normal corn plants, which don’t require presoaking before planting, corn seeds destined to be grown as microgreens should be soaked.

Give your corn seeds anywhere from 8 to 24 full hours of soaking before planting them as microgreens. Cold water works best.

When Do You Harvest Corn Microgreens?

Corn microgreens are best harvested as soon as they turn from a solid yellow color to slightly greenish. They should also be at least a few inches tall before being cut and harvested.

Typically, corn microgreens are ready for harvesting one to two weeks after sprouting.

Most microgreens are done once you harvest them, including corn microgreens. When you cut them down, there isn’t enough energy left in the roots and remaining stems to produce new growth.

That said, in some rare cases, especially if you’ve let your plants get too big, they may be able to grow back.

Can You Grow Corn Microgreens From Popcorn?

Corn microgreens are one of the easiest to grow, period. Yes, you can even plant them from popcorn seeds.

They’ll still grow into the healthy and nutritious microgreens you know and love, even when planted from popcorn!

Any variety of corn works just fine for growing corn microgreens. That said, sweet corn varieties are preferred by many home gardeners.

A few of the most popular corn varieties for microgreens are:

How To Grow Corn Microgreens 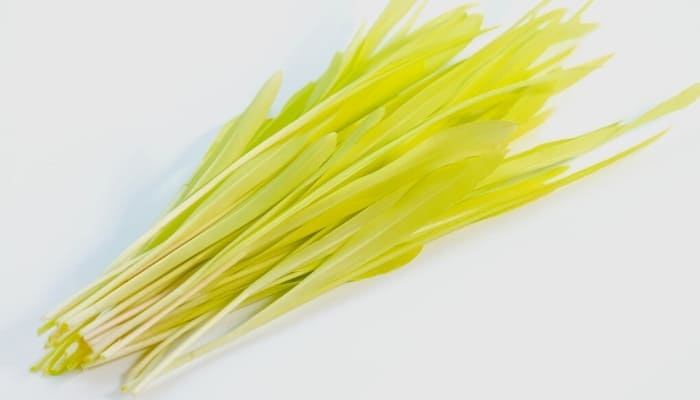 First, make sure that you have all the necessary supplies:

Once you’ve gathered the supplies, it’s time to get on to the fun part:

How To Grow Corn Microgreens Without Soil

Growing corn microgreens without soil isn’t all that different. In place of soil in containers, you use a special tray that has a lid with lots of slits in it (similar to the net pots used in hydroponics).

Other than that, everything else is pretty much the same albeit a bit more streamlined:

Corn microgreens are a great gardening practice and dietary supplement, to say the very least.

They are easy to grow and are packed with vitamins, minerals, protein, fiber, and a bunch of other good stuff, and they taste great as well.

You can grow them with soil, without soil, indoors, and outdoors. Plus, there are a ton of tasty ways to serve them up in meals, on the side of dishes, and as an ingredient in salads, soups, and smoothies.