Pine needles have many uses. You can use them as air fresheners, add them to mulch, smoke meat with them for an added flavor, or mix them with your vinegar and tea for a savory taste.

So what about composting? Are they safe to add or will they do more harm than good?

Can you compost pine needles? Pine needles are an excellent material to add to your compost pile. By the time the pine needles break down and turn into nutritious compost, they will have lost their acidity. You can use pine needle compost safely without changing the soil pH or harming the roots of the plants.

Although they become neutral by the end of the process, the fresh needles are too acidic, which can impact the good bacteria breaking down the organic materials in your compost bin.

Read on to find out how to compost pine needles safely.

Composting Pine Needles – What To Know

One thing to know about pine needles is that besides their high acid content, they also take a long time to break down fully.

That means you can’t add too large an amount of the fresh pine needles to the compost pile. This will only cause problems.

Not only will they slow down the composting process, but they could also change the pH of the pile in a way that would harm the micro-organisms responsible for turning the pile of leaves and food scraps into compost.

Pine needles have a nice smell when you burn them in a fire, and if you add them to the grill, they give the BBQ a delicious flavor and taste, but when composted, the pine needles add a high dose of carbon to the compost.

Pine needles are also rich in basic nutrients, especially nitrogen, which most plants need to grow a robust root system and fight off diseases.

Although pine needles tend to lose their high acidic concentrations by the time the composting process is over, you should be wary of reducing the pH levels of the pile.

A highly acidic medium could slow down or even kill the good bacteria that break down the organic materials in the pile.

Another problem with pine needles is that when they dry up, they become harder to break down.

The slippery needles are covered with a waxy cover that insulates them. If you add a large number of pine needles to the pile, the compost will take a long time before it’s ready to use.

How Long Do Pine Needles Take To Decompose?

How long pine needles take to decompose depends on whether they are fresh or dry.

Fresh pine needles have a thick waxy coating that makes it even harder for the bacteria to penetrate and reach the organic materials inside the needles.

Composting fresh pine needles could take from 5 to 6 weeks.

If you want to speed up the composting process, use aged pine needles. They should be at least a few months old. For best results, compost pine needles that were used as mulch.

In that case, the old pine needles would need about 3 weeks to break down and turn into compost.

Since they’re rich in carbon, pine needles are considered part of the brown ingredients in your compost pile.

But again, you should add them judiciously to the pile because of their high acidic content and the waxy coating that slows down the composting process.

Fresh pine needles that you use as mulch have a low pH between 3.2 and 3.8, but the needles tend to lose their acidity over time. The same applies to composted pine needles.

Once the good bacteria have gone through the waxy cover and broken down the carbon and other organic ingredients in them, the resulting pine needle compost would have pH levels between 5.0 and 6.0.

This compost is safe to use with most plants except those that love acidic soil, such as strawberries. 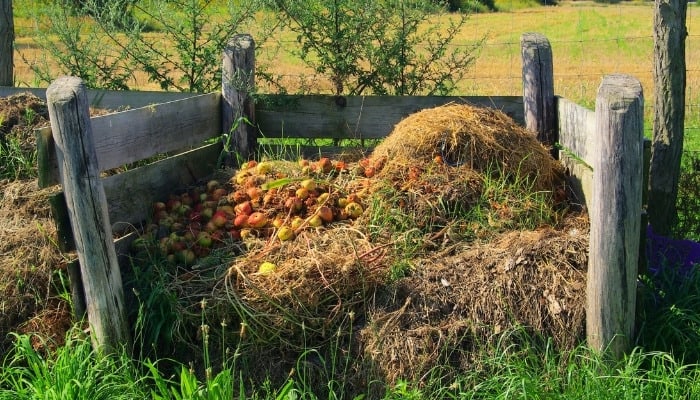 Any pile of compost needs three ingredients: enough moisture, plenty of oxygenation, and adequate amounts of green and brown components.

That said, when it comes to composting pine needles, you should follow these guidelines.

Can Pine Needles Be Used With Vermicomposting?

You shouldn’t add pine needles to your worm bin when vermicomposting. For one thing, pine needles have high concentrations of terpenes and hexane. Terpenes in particular are quite toxic to worms.

When you consider the wax coating and dry cellulose that the worms have to go through before they can get to the organic materials in the needles, it’s not advisable to use the acidic, and possibly toxic, pine needles in vermicomposting.

Are Pine Needles Good for Mulch?

Pine needles are an excellent source of mulch. The fluffy needles don’t get compact when they decompose, and they are easy to spread and replenish.

However, they also have a low pH level when fresh, which can acidify the soil. When they dry up, they become slippery and can be a fire hazard.

Not all plants like pine needles as mulch. Some of these plants include roses, lavender, asters, decorative garlic, artichokes, and thistles, among others.

Pine needles are a good ingredient in the brown layer you add to the compost pile.

However, your compost heap should never consist of more than 10% pine needles. They’re too acidic and could slow down the composting process.