When doing laundry, there’s nothing more annoying than all that lint in the dryer. It gets collected in the lint trap, somehow always winds up drifting around your floors, and requires regular cleaning up.

If the dryer lint trap isn’t cleaned regularly, that line will find its way all over the laundry and stick to it like glue.

But dryer lint doesn’t have to be a pesky problem. In fact, you can put dryer lint to good use, especially if you’re into composting.

Can you compost dryer lint? Dryer lint is as good for composting as any carbon-rich organic material you can throw into the compost pile. Lint from organic fibers and textiles such as cotton and wool are rich in carbon and will decompose easily. Add dryer lint as part of the brown layers of the compost pile.

However, not all dryer lint is good for composting. Unless the lint comes from organic fabrics and is biodegradable, it will not break down and can become a source of pollution.

Read on to find out which dryer lint to compost and how to get the most out of it in the compost bin.

Much like kitchen and garden waste, there’s no reason you should throw away dryer lint. Natural fabrics are rich in carbon and fibers.

Fibers can be a good source of food for the bacteria and micro-organisms that help with breaking down the organic materials in the compost bin, but not all lint that gets trapped in the dryer is good for your compost pile.

If dryer lint comes from organic sources (the cotton and wool clothes you put in the dryer), it is very much biodegradable and easy to compost.

The only problem is that dryer lint gets contaminated with other non-organic fabrics and materials.

Even if the denim pants you wash are 100% cotton, they still have synthetic materials in the zipper, threads, and lining.

The synthetic lint will not break down during composting and will end up in the soil.

Dryer lint that comes from cotton is rich in carbon and fiber content. The carbon ends up in the soil and improves its structure and tilth.

The soil becomes more stable when it has organic carbon in it. This in turn improves the soil’s aeration, which promotes healthier and more robust root development.

The fiber in the lint can help with the texture of the compost pile and improves oxygenation. Some bacteria will also feed on the fiber.

When Not To Compost Dryer Lint 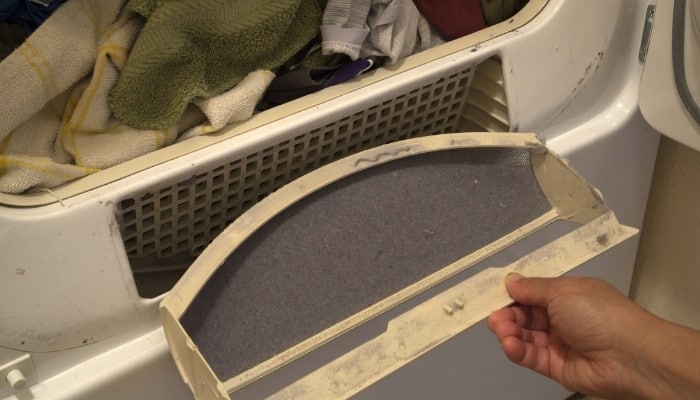 Not all dryer lint comes from purely organic sources.

If you’re washing sheets or items of clothes that contain synthetic materials such as polyester and acrylics, there’s a good chance these synthetic clothes will shed micro-plastics and other synthetic debris.

Unless the majority of the clothes you’re washing is made of organic cotton, then you shouldn’t compost the lint you collect from these clothes.

Otherwise, you’ll be adding synthetic debris to the soil, which is the last thing you’d want.

How Long Does Dryer Lint Take To Decompose?

The time it takes for dryer lint to break down and decompose in the compost bin depends on how much organic material content it has in its makeup.

Lint made of organic cotton with no synthetic contamination will break down quickly – even faster than wood chips, sawdust, and other brown materials you add.

If the lint is contaminated with synthetic materials and micro-plastics, this will slow down the decomposition since these materials are not biodegradable.

Is Dryer Lint a Green or Brown Compost?

Dryer lint, when it’s collected from cotton and wool clothes, is rich in carbon. That makes it part of the brown layer in your compost pile.

If you have a big pile of grass clippings that you want to balance with brown materials, then dryer lint is a good candidate. It’s packed with carbon, which is good for the soil.

It takes a notoriously long time to collect a decent amount of dryer lint that is worth the effort of composting.

However, it has a long shelf life, and it will not go bad if you store it for weeks or even months.

Start collecting lint from the lint trap after you do the laundry. Make sure it’s dry before you store it in a jar. When the jar is full, dump the lint into the compost bin as part of the brown materials.

Even if you don’t like composting, that doesn’t mean that dryer lint should go to waste. This versatile material serves in many situations and can become handy in different settings.

Can You Compost Hair?

Much like other organic materials, hair is both biodegradable and compostable. When it breaks down, it releases nitrogen that is ready to be absorbed by the roots.

As such, you should consider it part of the green layer in your compost pile.

Can You Compost Toilet Paper?

Not only can you compost toilet paper, but even toilet paper rolls are compostable as well.

You should shred them into little bits before adding them to the compost bin. They will decompose quickly that way.

Far from being a pesky problem, dryer lint is a handy material that you can add to the brown layer of the compost pile, but you should only collect lint from clothes made of organic cotton or wool. That’s the only lint that breaks down.

Lint contaminated with micro-plastics and acrylics is not recommended for composting. These synthetic materials will go into the soil, polluting the gardens you work so hard to build.