Cardboard – chances are, it can be found just about everywhere in your home. From egg cartons to Amazon Prime delivery boxes, you likely have more cardboard than you know what to do with.

Can cardboard be composted? Cardboard is a great source of carbon for compost, and most types can be composted, especially if broken down or shredded first. Soaking in water will make breaking down easier and speed decomposition. Glues, tape, and staples should be removed prior, and avoid cardboard with heavy dyes.

Ready to learn more? In this post, we’ll tell you everything you need to know about composting cardboard, from the best types to use to all the tips to follow for maximum success.

Is Cardboard Safe for Compost? What Is & What Isn’t

Almost all cardboard is safe for compost, though some types work better than others.

Types of Cardboard That Can Be Composted

You can compost just about any kind of cardboard, including large boxes and individual sheets.

You may need to break this type of cardboard into smaller pieces.

Flat cardboard is found in most food packaging, including cereal boxes and pasta boxes. Shoe boxes use flat cardboard too.

Wax-coated cardboard is the least common. While it can be composted, it is the most difficult to compost. It may be used in things like pet food bags or paper cups.

What Cardboard Should Not Be Composted

Most cardboard is just fine for compost, but you should avoid things such as:

Why Is Cardboard Good for Compost?

Cardboard is an excellent addition to any compost pile.

Not only is it more eco-friendly than simply tossing it in the trash, but it allows you to recycle cardboard that might not be accepted at recycling centers (like pizza boxes, which are typically rejected).

A source of carbon, cardboard provides the microorganisms in a compost heap with all kinds of energy and nutrients, helping them turn your trash into black gold that you can use in your garden.

Is Cardboard a Green or Brown Compost?

It will add structure and carbon to your compost pile, helping to balance out nitrogen-rich (green) ingredients like kitchen scraps and manure.

How To Compost Cardboard – 5 Tips 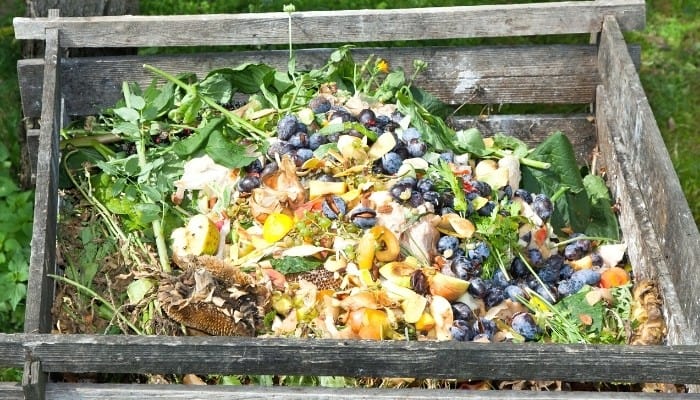 Ready to start composting all that cardboard taking up space in your house? Here are some tips to compost cardboard that you need to know about.

We’ll give you more instructions on how to shred compost later in this article, but regardless of which steps you follow, it’s essential that you break down your cardboard for the compost into smaller pieces first.

Large pieces of cardboard will decompose slowly, meaning it will take more time for your compost pile to “finish cooking.”

Soaking the cardboard in a bit of water can help speed things up too.

While compost is an excellent compost addition, it should not be the only ingredient fueling the pile.

You should also add plenty of  nitrogen-rich materials too, like manure, fruit peels, or grass clippings.

The best way to make sure you’re getting enough of both types of ingredients (greens and browns) is to layer.

Keep going with the process until your pile is finished.

3. Remember To Turn the Pile

Turning the compost every five days with a pitchfork will speed decomposition of your cardboard.

Depending on the type of cardboard you’ve added, it will take around six to eight months for the pile to be finished.

Turning not only speeds up the decomposition process, but it also prevents matting.

Matting can slow down composting by reducing how much oxygen and water are available to microorganisms living inside.

While shredding cardboard tends to be the quickest way to add cardboard to your compost, you can also give lasagna composting a try.

To do this, you’ll start your bin by laying down individual sheets of cardboard, then wetting them and covering them with a 2-inch thick layer of soil.

You will build up the lasagna compost just as you would normally, by adding alternating layers of green and brown materials whenever they become available.

With this method, you don’t need to worry about aerating or turning your compost pile. However, it does take more time to break down.

5. Use Only Clean Cardboard

Whenever possible, use only clean cardboard.

How Long Does It Take Cardboard To Break Down?

The amount of time it takes cardboard to break down in a compost bin will vary depending on the conditions and size and type of cardboard.

In general, it will take about six to eight months for cardboard to decompose.

Wax-coated cardboard may take a year or more.

How Do You Shred Cardboard for Composting?

There are several ways that you can shred cardboard for composting.

It’s often easiest to start by soaking larger pieces of cardboard in water. This will make them easier to shred. The longer you soak, the easier they will be to work with.

Soak the pieces long enough, and they’ll fall apart completely in your hands – perhaps with no shredding required!

When shredding cardboard, try to remove plastic bits like tape or document envelopes. Staples can be problematic too.

Not only will these items not break down in a compost pile, but if you shred using a shredding machine or similar tool, they can cause damage.

You can shred cardboard by using a box cutter or pair of scissors. You can also use a garden or wood chipper.

Of course, you may also be able to shred thinner pieces of cardboard using a document shredder too.

Can Pizza Boxes Be Composted?

The compost pile is the perfect final resting spot for pizza boxes, which often aren’t accepted at recycling centers because of grease stains and food crumbs.

That’s not a problem for the compost, though. Just cut the box into small pieces, and toss it into the pile.

Can You Compost Cardboard Egg Cartons?

You can compost every part of your morning egg routine, from the cardboard egg cartons to the eggs and eggshells themselves.

Of course, you won’t want to try to compost Styrofoam or plastic egg cartons.

However, the cardboard ones will break down just fine, helping to create rich fertilizer for the garden.

If the carton is extra thick, breaking it up into smaller pieces before putting it into the compost may help.

Can Toilet Paper and Paper Towel Rolls Be Composted?

Both paper towel and toilet paper rolls, two common sources of household cardboard, can be composted.

Consider stashing a compost pail in the bathroom that will allow you to collect these items as you finish using them.

You can also add things like tissues, cotton swabs, and other cardboard or paper-based personal care products too. They’ll add valuable carbon to your compost bin.

Can Cardboard Be Used Directly in the Garden?

Cardboard can be used directly in the garden without composting it first.

By adding cardboard to the garden, you can suppress weeds and invite earthworms. It will also add some structure to the soil as it breaks down.

If you’re hoping to build a new garden plot or raised bed, cardboard can also be used to prepare the area. It will kill the grass and make the area easier to work.

Can You Make Compost in a Cardboard Box?

Using a cardboard box as a starter container is a great idea. Though it’s not ideal for long-term use or indoor composting, you can build your compost in a cardboard box outdoors to keep it contained while it’s small.

Over time, the cardboard box will begin to disintegrate – but that’s fine. It will simply add nutrients to the rest of the pile.

If you want to use a cardboard box for long-term composting, you might be able to.

However, do bear in mind that this could lead to some issues related to moisture and insects, since the cardboard won’t provide a permanent barrier and will ultimately break down.

Taping around the box or adding some sort of impermeable liner may help.

Rather than throwing away all that cardboard in the trash or recycling bin, you can try the above tips to start turning yesterday’s boxes into tomorrow’s flowers!

Now is as good a time as any to get started on your new green lifestyle – so get that compost cooking, cardboard and all.