There’s nothing more frustrating for gardeners everywhere than when their prize flower or vegetable patch becomes overrun with weeds!

We all know what back-breaking work it is to keep those pesky weeds under control, and if you’re not using a product to help you, you may feel like you’re losing the war!

As a result, gardeners are always looking for a magical cure to this problem. That’s where Jack’s Dead Weed Brew comes to the rescue.

This organic herbicide is capable of nipping weeds, algae, moss, and errant grasses right in the proverbial bud!

What is Captain Jack’s Dead Weed Brew? Dead Weed Brew is a premixed, organic herbicide that can be used on visible weeds in the garden. It is safe to use in vegetable and flower gardens and landscaped areas. It is considered waterproof and therefore won’t wash away with the rain if allowed to dry for a minimum of three hours.

If you are looking for an effective weed killer that will continue to protect your plants even after a shower, Jack’s Dead Weed Brew is for you!

Read on to discover how your garden can be weed-free in no time!

When using a herbicide in the garden, it’s best to understand all the “ins and outs” that go into using it. This will ensure you reap the full benefits of its weed obliterating powers!

For the product to work effectively, you must use it correctly. Once you have located visible weeds, simply spray the formula onto the leaves until they are entirely saturated.

What’s astounding is that the weeds begin to die within just a few hours. How does Captain Jack’s Dead Weed Brew kill weeds?

It contains capric and caprylic acids, natural fatty acids found in palm kernels, milk, and coconuts. These ingredients work together to burn perennial and annual weeds causing them to wither and die.

While it is super beneficial to humans from a health perspective, when combined with capric acid, its acidic properties burn weeds’ leaves and leave them unable to continue living and thriving.

One of the aspects of being a responsible gardener is understanding the impact of herbicides and pesticides on other forms of nature.

A quick look at the product’s label will tell you whether it poses a risk to birds, bees, fish, and even your beloved pets (so, always check the label!).

The good news is that Captain Jack’s Dead Weed Brew is organic and safe for use in your garden.

However, it does pose a danger to aquatic life if allowed to run off into nearby water bodies and drainage systems.

It can also irritate the eyes and skin, so be careful of that. Prolonged exposure to the skin may cause an allergic reaction in some people.

Yes, as it turns out, the product is organic. Captain Jack’s Dead Weed Brew is an approved organic herbicide registered with the EPA (Environmental Protection Agency.)

While it is unlikely that Captain Jack’s Dead Weed Brew will cause the death of your pet, it is important to note that it is a herbicide that can cause eye and skin irritation.

Therefore, it’s advised to keep pets out of the treatment area until the product has dried. Once the product has had time to dry, it is safe for pets to reenter the area.

The topic of products that harm bees is a sensitive one. Bees play an essential part in the ecosystem as pollinators.

In fact, they have a role in every aspect of the ecosystem as they support tree, plant, and flower growth. They are essential to your garden thriving.

As such, you may want to avoid products that present specific danger to bees. Captain Jack’s Dead Weed Brew is considered a herbicide; these are generally safe for use around bees.

This products’ main ingredients are capric and caprylic acids, which are found extensively throughout nature and not considered harmful to the environment by the EPA.

Using Captain Jack’s Dead Weed Brew is really simple. When purchasing the product, you can choose a pre-mixed solution that does not require diluting; this is an excellent option for smaller gardens.

Then, it’s as simple as using the handy spray nozzle to apply the solution to visible weeds.

That said, it is best to spend some time reading and then following the application directions on the label for larger areas.

You can premix the solution and use it in a standard hand-held or backpack sprayer. The instructions are easy to follow and require diluting the solution with water before applying.

Apply the solution directly to the leaves of the weed until they are completely saturated, and then allow to dry.

Nobody wants to invest time and money in a garden product that just doesn’t work.

The good news is that this particular weed control product does work and has proven itself as an effective weed killer.

However, unlike commercial weed killers, it may take slightly longer to take effect.

The effects of applying the brew to the weeds should be visible approximately a few hours after treatment, but this can take as long as two days in some cases.

Also, note that while it kills both perennial and annual weeds, reapplication will be required to keep perennial weeds under control.

How Do You Use Captain Jack’s Dead Weed Brew on Houseplants?

While wielding the Cape Jack’s Dead Weed Brew spray bottle, you might wonder if you should give your houseplants a quick spray. Stop!

While this herbicide is safe to use in flower gardens and vegetable patches, it should only be sprayed directly onto weeds.

It is important to note that the active ingredients in the solution can damage your house plants if applied directly to them.

House plants are generally easy to keep weed free by simply removing any by hand if they pop up!

How Often Can You Use Captain Jack’s Dead Weed Brew?

According to the product label, it is advised to repeat the treatment and thus prevent new weeds every two to three weeks. 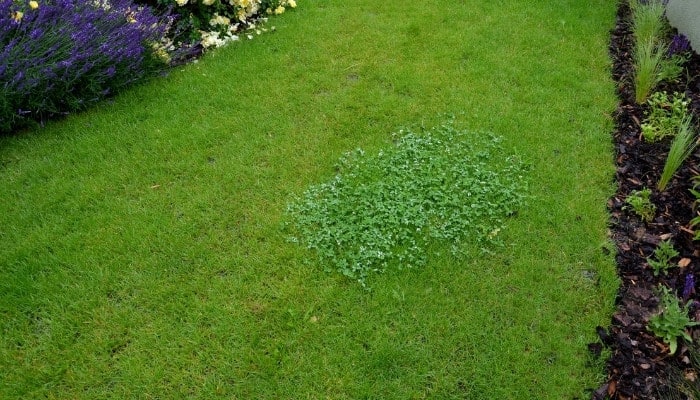 However, it should be sprayed directly onto the weeds rather than the surrounding grass as it may cause damage.

You might find spot-spraying weeds in the lawn quite hard to do, especially if there are a lot of weeds.

If this is the case, it is recommended to use Captain Jack’s Lawnweed Brew to control weeds growing in the lawn; this solution kills weeds, not grass!

This is because crabgrass tends to creep and form large clumps in the bald patches of lawn, making it challenging to spot-treat each individual weed with the Dead Weed Brew product.

Using a treatment like Lawnweed Brew ensures the surrounding grass is safe from damage while treating this creeping weed.

If you’ve never used the Captain Jack’s Dead Weed Brew before, you may wonder what its impact on your other plants might be.

As is the case with most weed killers, you should never apply the product to a plant you don’t want to suffer. Captain Jack’s Dead Weed Brew is designed specifically for killing weeds.

According to the instructions on the product label, you should avoid spraying it on all non-weeds to avoid causing damage.

Captain Jack’s Dead Weed Brew is an exceptional organic weed killing product. If you want to keep your garden free of weeds and the environment happy and healthy, this is the product for you!

Its natural ingredients are fast acting and are excellent for controlling weeds in borders,  in driveways, around buildings and  along pathways.

Its variety of uses makes it highly versatile when battling against the never-ending onslaught of weeds. Simply read the label, follow the easy instructions and enjoy a weed-free paradise.