Don’t be fooled by the name – these guys feed on more than just cabbages, and despite their minute size, they can reduce once-proud veggie patches to a veritable graveyard given half the chance. So what can be done to get rid of them?

How do you get rid of cabbage worms? Cabbage worms can be eradicated using a combination of preventative sprays, decoys, protective covers, and strategic planting. Worm infestations can be killed on-site using natural pesticide solutions and manual methods while companion and trap crop planting can deter adults from laying worm eggs.

These worms have quite an appetite, and it only takes a small handful on your crops to count as a full-blown infestation.

Luckily this greedy creepy-crawly is easy to spot, so you can minimize harm to your plants if you act quickly.

Let’s look at cabbage worms in greater detail from their characteristics and weaknesses to how to rid them once and for all from your garden!

Cabbage Worms in the Garden

You’re most likely to find these garden pests when you have seedlings developing as cabbage worms love to munch on new, fresh foliage.

For this reason, it’s vital that you know how to spot cabbage worms (in all their forms) and the traces they leave so that you can take swift action.

What Are Cabbage Worms?

Cabbage worms or “imported cabbage worms” are the larval forms of the Small Cabbage White Butterfly (Pieris rapae) or the Cabbage Moth (Plutella xylostella) and are technically caterpillars, not worms.

Cabbage worm is essentially a generic term attributed to several species of small green caterpillars that feed on cruciferous vegetables.

Where Do Cabbage Worms Come From?

Cabbage butterflies and moths lay their eggs on both the upper and underside of plant leaves, which hatch into the larvae (cabbage worms).

Depending on how favorable the weather is, butterflies will lay their eggs up to three times a year, so you can find eggs from May to September.

Before the late 1800s, cabbage worms were exclusively found in Europe before appearing in Canada and spreading throughout North America soon after.

What Do Cabbage Worms Turn Into?

The most common form, the Imported Cabbage Worm, will turn into the Cabbage White Butterfly, which is identifiable by its creamy-white wings with distinctive black spots near the outer edges, measuring 40 millimeters across.

Other common cabbage worm species, such as Mamestra brassicae, turn into nocturnal Cabbage Moths, which can be grayish-brown and between 10 and 15 millimeters across.

They have solid green bodies with pale yellow stripes along the back and sides with a lighter green belly and move like inchworms across the leaves as they have no legs in their midsection.

Some species will also have black markings.

Gardener and curator of The Rustic Elk Danielle McCoy recommends planting exclusively red or purple cabbage varieties “if only to make cabbage worms much easier to see!” 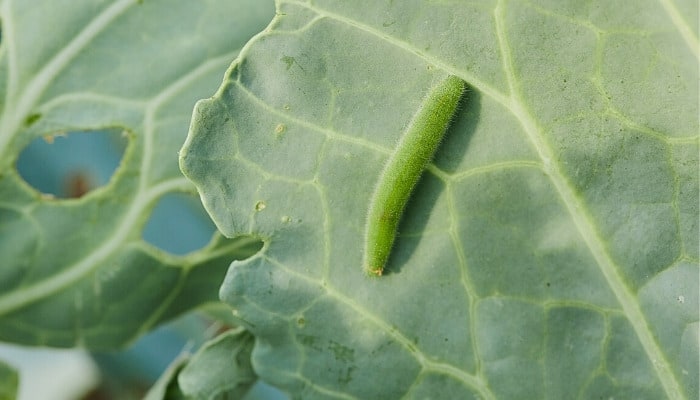 The spherical eggs measure approximately half a millimeter and appear on the leaves either singly or in clusters of white or yellow dots.

Their feces resemble round dark-green to brownish pellets but may also appear like green sawdust and are commonly found near the stem or base of plants.

Typical signs of damage are various-sized uniform holes across entire leaves, but they can also target flower stems and the head of crops (i.e., broccoli/cauliflower florets).

Cabbage worms specifically like to feed on the flat leaf areas between the veins and stems, often leaving only the “skeleton” of the plant’s base and stems. 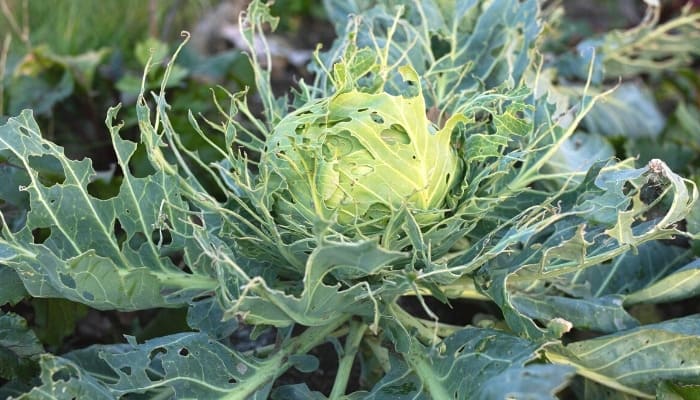 Pupal Stage (Fall-Winter): Assuming they are not found and dealt with on your crops, the larval cabbage worm will stop feeding after 3 or 4 weeks and enter its pupa stage of development.

It attaches itself to the plant using a slimy silk-like thread and forms a chrysalis (cocoon) where it will hibernate all winter.

Adult Stage (Spring-Summer): They then emerge as adults from their chrysalis structures with fully developed wings and begin mating in the spring.

Adult female Cabbage White butterflies then lay their eggs on the leaves of the same host plant (or ones nearby), which hatch within 7-10 days.

The emerging baby caterpillars or “worms” begin the process all over again!

What Plants Do Cabbage Worms Target?

All plants in the Brassicaceae plant family are at risk from hungry cabbage worms. This includes any kind of cruciferous vegetables, such as:

They are also fond of lettuce and can occasionally attack flowers like sweet alyssum and nasturtiums.

As butterflies use scent trails to help them find their food, planting pungent crops, like lavender, wormwood, thyme, or peppermint, near your cole crops can effectively throw them off their own scent and deter them from laying eggs on your cruciferous plants.

Jordan Charbonneau from Southern Exposure Seed Exchange also recommends inviting a natural predator of the cabbage worm to your garden:

“Many songbirds eat cabbage worms but will only notice them if they make regular visits, so consider adding perches, feeders, or bird baths to the area.”

Are Cabbage Worms Harmful to Humans?

No, cabbage worms are harmfull to humans. No harmfull parasite is found in or on plants in the Brassicaceae family, according to Professor of Epidemiology Timothy Sly at Ryerson University, Toronto.

What Happens if You Eat a Cabbage Worm?

It won’t be appetizing, but eating a cabbage worm won’t harm you in the least.

A controversial article published in the Times of India in 2017 falsely claimed that ingesting cabbage worms could impact brain health, but this has been repeatedly debunked by neurological experts.

How To Get Rid of Cabbage Worms

Cabbage worms can be hand-picked and removed as you come across them, but this will only go so far in limiting the damage.

Holder of a Ph.D. in plant defense and owner of Plants Rule, Dr. Helga George recommends applying a treatment spray of the beneficial bacteria BtK (find it here) to the foliage every 1-2 weeks as “this immediately stops them feeding and causes them to die of malnutrition within days.”

How To Get Rid of Cabbage Worms Naturally

You can deter cabbage worms naturally by introducing parasitic wasps to your garden to feed on the host caterpillars, or create your own cabbage butterfly/moth decoy to fool the real ones into thinking your veggie patch is already spoken for!

Here are some other natural control methods…

You can mix equal parts baking soda and flour and “dust” the affected leaves with the mixture. The cabbage worms will attempt to eat it, which kills them within a few days.

Extracted from the neem tree of India, this naturally occurring oil is a popular organic pesticide.

The bitter taste deters the worms from feeding on the leaves and can kill infestations when sprayed directly onto cabbage worms and worm eggs.

I use this organic neem for pest problems on both indoor and outdoor plants.

This is a powder made from fossilized algae which, when sprinkled onto your plant’s foliage, cuts the skin of soft-bodied insects as they squirm through it – drying them out and eventually killing them.

This one comes with a handy dusty for easy application.

When used alone, vinegar won’t kill cabbage worms (although the bitter taste may stall them in feeding). Vinegar will only kill the worms when used as part of a water and dish soap spray solution.

Yes, a saltwater solution of 1 tablespoon of table salt in ½ gallon of water sprayed directly onto the cabbage worms should kill them within a matter of days as this causes them to bloat and die.

Spraying a soapy water solution onto the leaves may deter their munching, but it won’t kill the cabbage worms.

You can fill a bucket with a dish soap solution, however, and drop hand-picked worms into the water, which will kill them.

Many gardeners swear by a simple cabbage worm spray consisting of:

Spray it sparingly onto the tops and undersides of the leaves, taking care not to saturate the foliage.

Danielle McCoy at The Rustic Elk advises “testing it on a small area of your plant just in case, as the vinegar element is a natural herbicide when applied in large doses”

How To Prevent Cabbage Worms

Preventing problems is much easier than dealing with large infestations. Try one or all of the following before you spot the first tell-tale holes on your developing plants.

Install some floating row covers to shield your cruciferous veggies from adult Cabbage White Butterflies looking to lay their eggs.

Place these covers over your crops immediately after planting, and leave several inches of space to deter the butterflies from attempting to deposit eggs directly through the netting.

I’d recommend this large cover (10 x 30 feet). It’s reusable, and having too much is always better than not having enough.

If cabbage worms are going to be in your garden, lure them to one of their favorite plants instead so they can chomp the leaves and lay eggs to their hearts’ content at a safe distance from your vegetable crops.

Nasturtiums make a great trap crop as cabbage worms go to town on the leaves, stems, and flowers!

3. Clean Up After Harvesting

Once you’ve harvested a (hopefully) healthy head of cauliflower or a similar plant, be sure to remove all remains of the plant.

You can’t guarantee that cabbage worm eggs and pupae won’t be lingering somewhere on the plant, so till the soil well to stop any infestation in its tracks.

Hang up a few yellow sticky traps near your veggie patch to catch adult Cabbage White Butterflies before they have a chance to lay their eggs. You can source these easily at your local garden center.

Other Pests That Attack Cabbage Plants

Alongside cabbage worms, you should also watch out for:

Find out how to identify and possibly manage some of the above-mentioned insects here.

To call these ravenous critters a nuisance in your garden is an understatement!

Now that you’re familiar with the life cycle of cabbage worms and what it is that repels them, you can easily take measures to stop future infestations and take back control over your veggie patch.