Interested in farming mushrooms? If so, you need to know all about blue oyster mushrooms and what makes them such a great choice to get started with.

Not only are blue oysters easy to find in nature, but they’re also easy to grow, and there’s a fair demand for them in local markets.

What is a blue oyster mushroom? Blue oyster mushrooms are an edible subspecies of pearl oyster mushrooms. They have a large blue cap and grayish gills that connect the stem and cap and are easy to identify. They are culinary mushrooms with no psychoactive effect and are consumed worldwide. They grow in humid regions on rotting wood.

Read on below to learn more about blue oyster mushrooms, how to grow them, and more!

The blue oyster mushroom, scientifically known as Pleurotus ostreatus var. Columbinus, is a meaty mushroom that is widely consumed around the world.

The common use for blue oyster mushrooms is for eating.

Technically speaking, blue oysters are a subspecies of pearl oyster mushrooms. The most significant difference is in the bluish caps and gray-colored gills of the mushroom.

Originally, these interesting blue mushrooms came from Western Europe, where there are plenty of cool temperatures for them to thrive. Today, they are found all around the world.

The most common places to find blue oyster mushrooms are on dead trees and rotting logs in forests and mountains with high humidity, such as sub-tropical locations.

This species grows mainly during the spring and autumn when temperatures are naturally between 55°F and 65°F.

That said, these mushrooms may fruit in temperatures as high as 80°F to 90°F.

Blue oysters prefer a humidity of approximately 50% to 70%.

The blue oyster mushroom is almost identical to the pearl oyster, as well as pink, white, and golden-colored oysters.

The only difference is that its color is not quite as bright as others.

The cap is typically the darkest hue of blue or gray. The stem is normally lighter shade of gray or blue.

Underneath the cap, the blue oyster has a series of solid gills that run from the stem to the cap. The gills of this mushroom slightly resemble a sponge of sorts.

There are three main steps, or growth stages, for blue oyster mushrooms:

How Long Does It Take Blue Oyster Mushrooms To Fruit?

Blue oyster mushrooms fruit extremely quickly. On average it takes around 5 to 10 days for blue oysters to fruit.

The substrate, environment, and other factors play into how quickly they fruit.

All oyster mushrooms belong to the same family. The only real difference between each one is its color. In terms of taste, they are all said to taste practically identical.

What Part of Blue Oyster Mushrooms Do You Eat?

The cap is the main part of the blue oyster mushroom that folks enjoy eating. The bottom part of the stem is typically discarded because of dirt or wood that’s ingrown.

The upper portion of the stem is edible but is a bit tougher than the rest of the mushroom, and so it is also discarded quite often.

The best part about oysters is that they have an extremely meaty taste and texture when cooked correctly. Some even say that blue oysters actually taste like sea oysters.

What Happens If You Eat Blue Oyster Mushrooms Raw?

Blue oysters are edible raw or cooked, but if you decide to eat them raw, prepare yourself…they might have a slightly metallic taste to them.

But don’t be alarmed – nothing to worry about with these guys!

There are two main uses for blue oyster mushrooms. One is obviously eating them, whether raw or prepared. Mostly, they are eaten cooked, in soups and or with pasta.

The other regular use for blue oyster mushrooms is medicinal.

Although human testing has been limited thus far, these mushrooms are currently used in medicine for cancer, diabetes, treating infections, and more.

There is a full host of benefits from blue oyster mushrooms. A few of the most significant ones include:

The prices for both blue oyster mushrooms and grow kits for growing your own fresh mushrooms vary widely depending on where you live, where you buy, and more.

Below are the average prices for purchasing blue oysters as well as buying a standard grow kit:

Mushrooms are a bit different to grow than most plants but not exactly harder.

The steps for growing blue oysters include:

During the inoculation stage, the blue oyster mushroom spawn gets mixed with a substrate/growing medium.

It is then placed into jars with tiny holes in the lids or into bags with small air holes.

After two or three weeks of inoculation, the jars or bags are moved into a warmer and darker room where the incubation takes place.

At this point, the blue oyster spawn requires around seven days, maybe even 10 or more, before they begin colonizing the growing medium.

The final stage requires another several days and involves exposing the jars or bags to high humidity, cooler temperatures, and fresh oxygen.

This is the stage where mushroom pins begin shooting up and fruiting. After pinning beings, in four to six more days your Blue Oysters are ready to pick and eat or sell.

What Is Blue Oyster Spawn?

Sawdust and straw are among the most popular organic materials that are used for blue oyster spawn.

The BetterFungi Spawn Mycelium is an affordable way to grow your own blue oyster mushrooms.

The mushrooms grown from these spawn are great for using as gourmet ingredients as well as medicinal mushrooms.

This is also excellent as both an educational activity as well as a versatile gift for nature lovers. 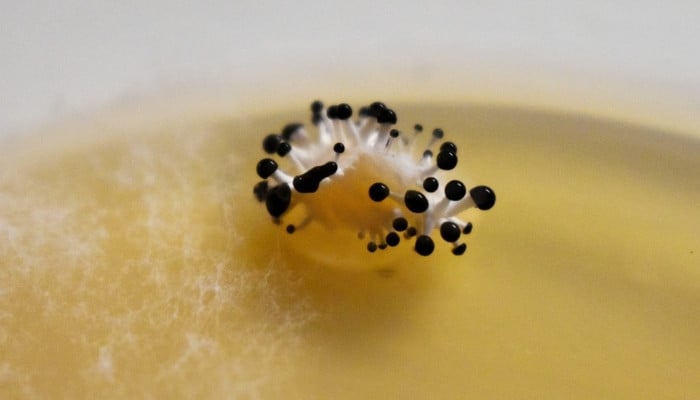 Blue oyster mushroom growing kits make it possible to produce these beautiful oysters on your own.

They’re easy to use, don’t cost much, and enable you to grow a constant supply of fresh mushrooms.

One of the easiest blue oyster mushroom kits to use is the North Spore Blue Oyster Mushroom Kit.

It comes with a pre-colonized sawdust block with healthy and productive blue oyster mushroom mycelium.

This kit comes with everything needed to get started with growing mushrooms quickly and successfully, including a sprayer.

It produces large yields, and multiple flushes are possible as well.

The GMHP Organic Blue Oyster Mushroom Kit has been around for over three decades with reason; it is one of the best in the business.

With one of these mushroom “logs”, you can grow blue oysters indoors in just about any room or space.

The log takes up 9 inches by 9 inches of space and requires temperatures of 65°F to 73°F.

One log produces approximately a pound of mushrooms in two to four crops. Even better, crops take only one to two weeks to grow!

These kits seem to be top of the line, producing crops within a week and a half to two weeks. The kits are organic, with absolutely no chemicals.

Simply set them up in 50°F to 80°F temperatures and follow the instructional video that is included, and you’ll be harvesting big beautiful mushrooms in no time.

When To Harvest Blue Oyster Mushrooms

Generally speaking, the best time to harvest mushrooms is when the top of the mushroom goes from curving down to curving up.

That said, timewise, most blue oyster mushrooms should be harvested between three to five days after they start forming.

How To Harvest Blue Oyster Mushrooms

Harvesting blue oyster mushrooms is easy; simply pick or cut off the whole cluster of mushrooms.

Picking them individually is also possible, but they won’t last as long. In the fridge, blue oysters last longer than most mushrooms.

How Many Times Can You Harvest Blue Oyster Mushrooms?

The amount of times you can harvest blue oyster mushrooms is dependent on how long the mycelium is healthy and productive. Typically, that’s around 35 to 60 days.

With a crop of blue oysters ready for harvesting every one to two weeks, you should be able to get in at least three harvests.

How To Store Blue Oyster Mushrooms

The best way to store blue oysters is in the fridge. Place them in a plastic bag, without closing it completely. That way they have plenty of exposure to cool air while they’re being stored.

Stored properly in the fridge, these mushrooms may last up to a full week.

How Do You Know When Blue Oyster Mushrooms Go Bad?

When your blue oyster mushrooms go bad, you won’t have to wonder how to tell. They will turn darker in color as well as develop wet slimy skin.

However, if they aren’t quite bad yet, they may be cooked and restored for a few days longer. Otherwise, it’s time to toss them out for good.

How To Increase the Yield of Blue Oyster Mushrooms 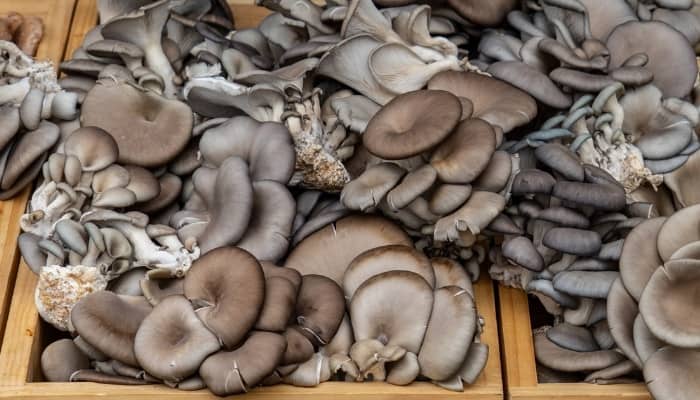 Everyone has their own little tricks for larger gardening yields, and it is no different with increasing the yield of blue oysters.

One of the main tricks is exposing the grow room/area to plenty of fresh air and light in addition to constant misting.

Another way to enlarge your yield is to experiment with various substrates. Legume waste, rather than straw or wood chips, is said to increase yields in blue oysters tremendously.

As with anything that grows here on Earth, there are a few common problems with blue oyster mushrooms. Below, we explain the two most significant ones as well as their solutions.

Controlling the environment in which your mushrooms are growing is crucial.

If the environment is wrong, for even a short while, it may cause serious setbacks or even an entire crop failure.

This includes too much or too little water, not enough air, and a temperature that’s too high or too low.

The best solution is to avoid creating or exposing your mushrooms to the wrong environment to begin with, and/or correcting the environment quickly and efficiently when needed.

However, for that, you need to have an understanding of mushrooms, how they grow, and what may accidentally sabotage your crop.

Probably the most common problem to occur with blue oyster mushrooms is a slight yellowing of their caps and stems.

The yellowing typically happens as the mushrooms start drying out due to a drop in humidity/moisture or hard temperature change.

Increase the humidity to 80% or 90% and spray those babies several times per day.

Growing blue oyster mushrooms at home is a great way to cut down on the grocery or medical expenses if you consume quite a bit of these tasty mushrooms.

Blue oyster mushrooms are also a great crop to learn how to farm for profits or to use as an educational tool for children.

Anyone can successfully grow blue oyster mushrooms at home with absolutely no previous experience.

If you’re considering it, give it a try! You may just be surprised how easy it actually is.