It’s completely natural for algae to show up in hydroponic systems, but when/should you worry about it?

Is algae bad for hydroponics? Algae is common in hydroponic systems, though it typically isn’t a major problem. If algae appears before your crop is finished, many times you can wait until after harvest to treat it. However, severe algae buildups can lead to oxygen and nutrient deprivation for plants and unsuitable pH levels.

Read on below and learn all about algae in hydroponics, including the types, causes, effects, how to treat them, and more!

Algae and Hydroponics – What To Know

Hydroponic growing systems and algae are like peas in a pod… sort of! At any rate, they are far from strangers.

Anywhere you have hydroponic operations going on, algae are somewhere nearby growing or waiting for the chance to spring to life.

If you’re new to hydroponics, there is a bit of a learning curve involved with algae.

In the following sections, we discuss everything you need to know about algae and hydroponics in much more detail.

What Causes Algae in Hydroponics?

Therefore, algae are able to come to life and spread rapidly due to all the available resources.

Negative Effects of Algae in Hydroponics

There are a few major side effects that occur within an algae-overloaded hydroponic system:

Algae has many forms, most sharing basic similarities such as a slimy, stringy, or furry appearance.

The color of the algae depends on the specific type, which we discuss in the next section. That said, most algae are green, black, red, or brown. Some algae even have a bluish hue.

Types of Algae in Hydroponics

There are at least five well-documented types of algae:

Algae that are the color green are typically lumped into the category of Chlorophyta.

The brown algae are one of the most predominant types found along rocky coastlines and in cold Northern waters.

They belong to the family Phaeophyceae, are multicellular, and are known by most as simply seaweeds.

Black algae itself isn’t harmful, though it can be a carrier of harmful bacteria.

Algae that appear bluish green is common enough that it deserves mentioned on our list.

In reality, the algae are green, but the bacteria Cyanobacteria that are inside of it give off a bluish sheen after receiving energy from the sunlight.

The red algae are most dangerous in aquaponics, because they may be toxic to fish.

In nature, their function is to create fresh oxygen in the sea. That said, on the plate, they are considered super-food (as are some blue-green algae).

Is Green Algae Bad for Hydroponics?

Green algae, like most types of algae, isn’t a problem unless it is left unchecked. A bit of green algae in your hydroponic system is absolutely normal.

In fact, it could be seen as a sign that your system’s environment is perfectly healthy. However, too many green algae in the system causes the same negative effects as other algae. 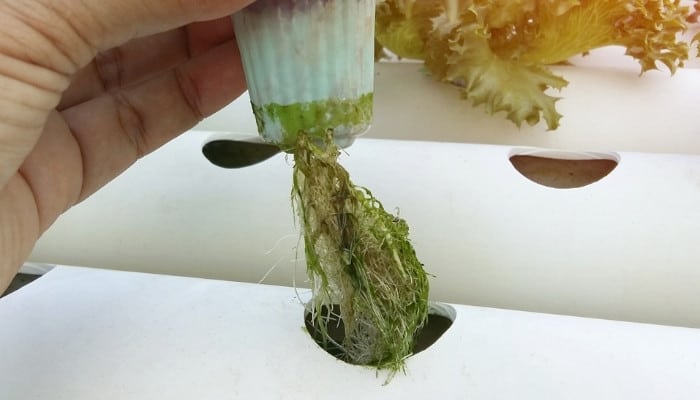 Does Algae Affect pH in Hydroponics?

If the algae growth in your hydroponics system is left untreated for too long, it may eventually cause significant swings in the pH.

Unchecked algae may affect pH levels by as much as two full units. This is but one reason why it’s so important to consistently monitor pH levels in your system.

If you aren’t already doing so, pick up a pH monitor (this one also measures EC and TDS), and get in the habit right away.

Algae isn’t harmful to plants unless it is unchecked. When algae begin developing on a large scale, it sucks away much-needed nutrients and oxygen from developing plants.

The bottom line? Treat algae before it starts affecting the growth of your crops!

Is Algae Bad for Aquaponics?

Generally speaking, algae is no worse for aquaponics than it is for other forms of hydroponics.

That said, if left to grow as it pleases, it will starve plants of air and nutrients they need for healthy growth and development.

Is Algae on Rockwool Bad?

Algae often get a bad rep because it’s not exactly as pretty as other life forms, like flowers or kittens, but, in fact, it is just as harmless as a flower or kitty-kat when it comes to rockwool.

If you’ve noticed some algae on your cubes, fret not. Algae cause zero harm to rockwool or the seeds/plants growing in them.

What Kills Algae on Rockwool?

The best way to kill algae on rockwool is simply by covering the tops of them. When you take away their light, the algae isn’t able to continue growing or spreading.

Between uses, boiling the rockwool cubes and storing them in a dark place destroys pathogens and helps prevent mold and algae.

How To Get Rid of Algae on LECA

The same tactics as described above for rockwool also work for LECA. All you need to do is boil them for a few minutes, rinse them, and store them in a dark and dry place until further use.

As long as they aren’t exposed to excessive moisture and light, algae won’t grow back.

How To Clean Algae From Plant Roots

Start by cleaning the water regularly in your hydroponic system to avoid algae buildup to begin with.

Remove the net cup and plant, rinse the roots, apply hydrogen dioxide directly to the roots that are affected by algae, rinse them, and place the net cup holding the plant back into the growing system.

For roots with thick algae covering them, you may need to use a sponge to lightly scrub the buildup away.

Why Is My Hydroponic Water Turning Green?

Hydroponic water is known for turning green due to algae. The water turns the color it does because the algae are made up of chloroplasts and organisms that are green.

That’s why you notice the water in pools, aquariums, and hydroponics systems turning green when they aren’t cleaned/treated for algae regularly.

Can You Use Algae Eaters in Hydroponics?

The short answer to whether or not you can use algae eaters in hydroponics is yes. The slightly longer answer is that this method is best reserved for aquaponic systems.

Channel catfish, tilapia, and plecostomus are among the most popular fish species to use for regulating algae issues in hydroponics/aquaponic systems.

Cyanobacteria consist of a type of photosynthetic bacteria that are most often found in watery environments (like hydroponics).

It is believed that Cyanobacteria are responsible in part for producing gaseous oxygen as a side effect of the photosynthesis process of plants growing in hydroponic systems.

When To Be Concerned About Algae in Your Hydroponic System

If you’re just noticing algae in your hydroponic system, there is still plenty of time to take care of the situation before it gets out of control.

Unless the algae are already forming into solid clumps on the surface of the water and clinging to components like pumps and hoses, it isn’t something to be overly concerned about.

Simply give the top of the water a skim to remove floating algae, and clean the components.

However, if the algae are thick, a full change of water and scrubbing of your reservoir and components may be necessary as well.

How To Prevent Algae Growth in Hydroponics

There are numerous basic methods for preventing algae growth in hydroponics. That said, keep in mind that having some algae in your system is practically inevitable.

A few tricks to prevent algae growth in hydroponics include:

Even when algae has taken over your hydroponic system, there is still light at the end of the tunnel.

The steps to killing the algae in your system are as follows:

Alternatively, if your system isn’t completely overtaken with algae and you don’t want to dismantle it for deep cleaning, you can rinse/scrub each plant’s roots with hydrogen peroxide and a sponge.

How To Get Rid of Algae in Aquaponics

Getting rid of algae in aquaponics is basically the same as with any hydroponics system. The one big difference is, of course, the fish that are swimming around in aquaponic systems.

The best way to get rid of algae in aquaponics is therefore to enlist the help of beneficial fish species like channel catfish or tilapia who help regulate algae levels.

Other commonsense ways to cut back algae in aquaponic systems are keeping it shaded or setting up indoors and covering the water with blue or black tarps.

A Final Word About Algae in Hydroponics

Algae in hydroponics aren’t always a bad thing and are completely natural. However, too many algae can be threatening to the well-being of your plants.

As algae grow larger in hydroponic systems, they consume nutrients and oxygens needed for plants and fish. That’s why you must be vigilant in treating it.

Hopefully this article has answered any questions you had about hydroponics and algae!